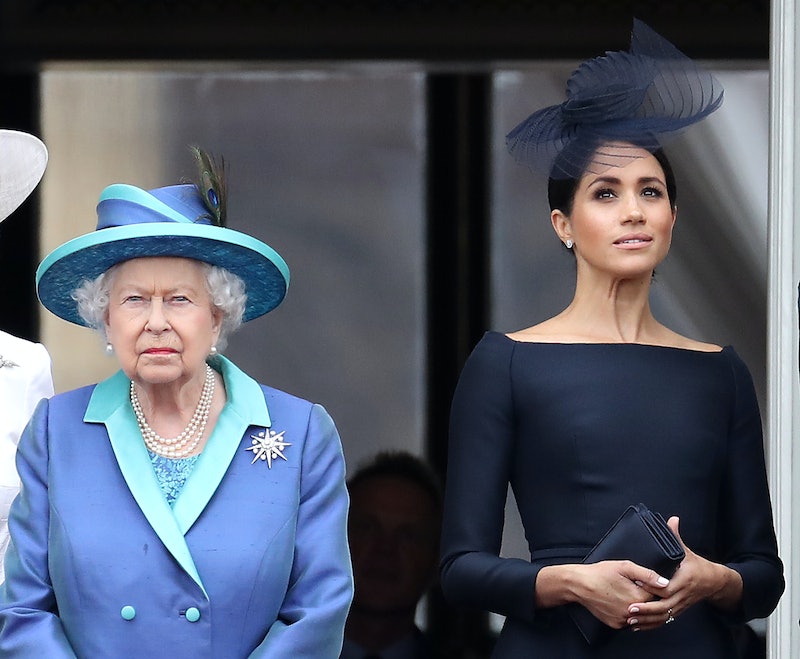 On March 2, it was revealed that former aides of the Sussexes had made allegations of bullying back when they were still living at Kensington Palace. Meghan Markle has denied the claims, but the Palace has responded by launching an independent inquiry into the allegations. With the situation changing nearly daily, and plenty of information coming from all angles, this is a story that can feel a little confusing. But fear not — here’s everything to know about the Meghan Markle bullying claims and investigation.

What are the allegations?

A few days before Harry and Meghan’s Oprah Winfrey interview aired on television, a story emerged in The Times. The piece, published March 2 and picked up by other publications the following day, contained accusations from former aides that the Duchess of Sussex had bullied them during her time at Kensington Palace. The complaint was apparently first made in October 2018.

The story was based on a leaked email, sent by a staff member, that alleged Markle’s behaviour caused two personal assistants to quit. According to The Times, "two senior members of staff have claimed that they were bullied by the duchess," while a third alleged, “it felt 'more like emotional cruelty and manipulation, which I guess could also be called bullying.'”

The email was apparently sent to Prince William’s private secretary, Simon Case, from Kensington Palace Press Secretary Jason Knauf, and detailed how Markle “drove” two personal assistants out, while undermining the confidence of a third. According to the email, she “was able to bully two PA’s out of the [royal] household in the past year. ... The Duchess seems intent on always having someone in her sights.”

A follow-up email questioned whether the establishment’s policy on bullying and harassment “applies to [members of the royal family].” Knauf also explained that the palace’s head of PR, Samantha Carruthers, “agreed with me on all counts that the situation was very serious.”

However, Harpers Bazaar reports that when the individuals who were the subject of Knauf’s email discovered an official complaint had been made, they asked for it to be withdrawn. The magazine’s royal reporter Omid Scobie cited an unnamed source as saying, “When it became known to [the two individuals], they each asked for the matter to be rescinded and for it to not become an official complaint.”

On May 5, 2021, Knauf helped Meghan win her copyright claim against the Mail on Sunday, which published extracts of the letter in early 2019. Per the Guardian, Knauf’s “unequivocal” denial of having helped Meghan write a letter to her estranged father meant that the allegations made by the Mail On Sunday’s legal team were dismissed by Lord Justice Warby, who granted summary judgment in the duchess’s favour.

The Guardian reported that Knauf would “leave his senior role with the Duke and Duchess of Cambridge” on May 12. He is said to be moving abroad.

How has Meghan Markle responded?

Markle has firmly denied the bullying allegations and argued that they are simply an attack on her character. In an initial statement, a spokesperson said:

"The duchess is saddened by this latest attack on her character, particularly as someone who has been the target of bullying herself and is deeply committed to supporting those who have experienced pain and trauma.”

"She is determined to continue her work building compassion around the world and will keep striving to set an example for doing what is right and doing what is good," the statement continued.

Markle’s representatives have made it clear that they believe these reports were released to drum up negative press in the lead-up to the couple’s Oprah interview.

A spokesperson for the Sussexes further explained, per Harper’s Bazaar: “Let’s just call this what it is—a calculated smear campaign based on misleading and harmful misinformation. We are disappointed to see this defamatory portrayal of the Duchess of Sussex given credibility by a media outlet. It’s no coincidence that distorted several-year-old accusations aimed at undermining the duchess are being briefed to the British media shortly before she and the duke are due to speak openly and honestly about their experience of recent years.”

A friend of the couple also told Harper’s Bazaar that, “Harry and Meghan knew that it would get ugly in the run up [to the Oprah special], but seeing such an obvious attempt at destroying her character was distressing and upsetting.”

The bullying claims also are in stark contrast to others who have detailed positive experiences while working with the couple. Catherine St-Laurent, the former Chief of Staff of the Duke and Duchess of Sussex and executive director of Archewell Foundation, said working with the couple was “incredible” in an interview with The Cut.

“They are incredibly talented and creative leaders,” she said. “I’m grateful to have had the opportunity to do that, to be able to be with them on their journey. The time that I spent with them was incredibly fulfilling.”

“I think they have the potential to be very influential leaders in the social-impact space. I look forward to continuing to be a part of that,” she said, in reference to the fact she still remains in a senior advisory role for Archewell.

What is the Palace’s reaction?

Buckingham Palace’s initial response to the article by The Times showed they were taking the allegations seriously. Their statement read:

“We are clearly very concerned about allegations in the Times following claims made by former staff of the Duke and Duchess of Sussex.

“Accordingly, our HR team will look into the circumstances outlined in the article. Members of staff involved at the time, including those who have left the Household, will be invited to participate to see if lessons can be learned.

“The Royal Household has had a Dignity at Work policy in place for a number of years and does not and will not tolerate bullying or harassment in the workplace.”

In the weeks following the article being published, Buckingham Palace has now hired independent external investigators to handle the inquiry, proving they are determined to get to the bottom of what really happened.

What will happen now?

As mentioned, the latest development comes as Buckingham Palace has hired a third-party law firm — rather than an in-house team — to run the investigation (according to The Sunday Times).

Both past and present royal aides who did not give evidence at a recent privacy court case regarding Markle will be invited to speak to investigators, but Meghan and Harry will not be, it is thought.

There is currently no set time frame, but it’s reported the inquiry has already begun and is ongoing. A Royal source told The Times, “It will take as long as it will takes.” Recent news suggests that the official report from the investigation may even be delayed until 2022.

Markle had recently "written to request the evidence,” per The Sun, asking to see documents, emails, and text messages in relation to the bullying claims. She was apparently “assembling her defense” according to the publication.

The outcome of the investigation may determine future standards of behaviour expected of working members of the royal family towards their staff.

The bullying allegations are also yet another issue that speaks to the divide in the way the Sussexes are perceived. While credible accusations of bullying should always be taken seriously, there are those who feel, as the couple have stated, that the timing of the bullying allegations suggests they were an attempt to undermine any claims made in their Oprah interview. There are also those who feel the royal family’s reaction to the bullying allegations is hypocritical given their apparent lack of action over the sexual abuse allegations faced by Prince Andrew (which he denies), and to reports of professional misconduct by other royals. The formal investigation launched by the palace has also been contrasted with its decision to deal with Meghan & Harry’s accusations of racism privately.