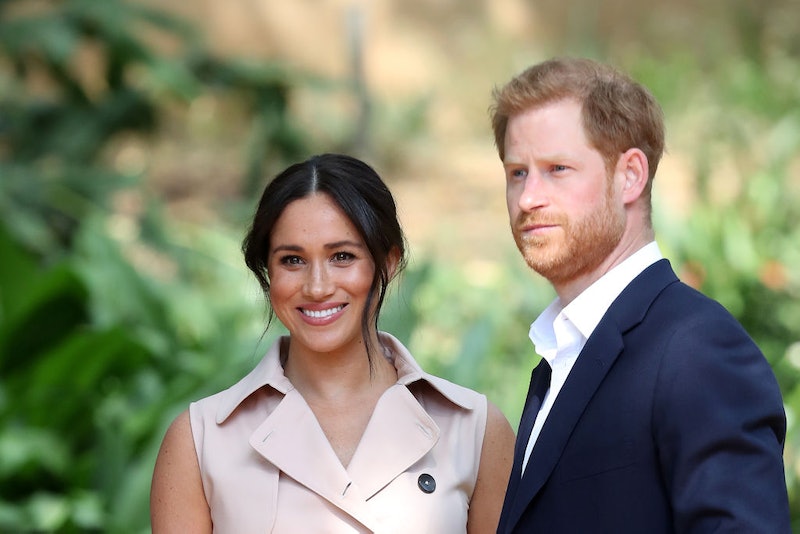 During lockdown, Prince Harry and Meghan Markle have appeared on only a handful of joint zoom calls. But they have not been seen together on Zoom in a while, and certainly not since they moved house. Until now, that is. Meghan Markle and Prince Harry just did their first joint Zoom call from their new home in Santa Barbara, for an important reason.

The Sussexes joined four young leaders from around the world, all of whom have founded important organisations or are social entrepreneurs in their own right, among them: Hunter Johnson, founder of The Man Cave in Australia; Zambian social entrepreneur, Brighton Kaoma; Project Rockit co-founder Rosie Thomas; and empowerment YouTuber Vee Kativhu. Part of a Queen's Commonwealth Trust discussion panel – the second the former royals have participated in – they discussed how the digital world can be used as a positive force.

"Everyone's mental and emotional wellbeing are perhaps more fragile than ever before, certainly with COVID and our dependability on devices right now in the absence of human interaction," said the Duchess when discussing the importance of positive online experiences. "People are going online more than ever before to feel community."

Prince Harry reflected on the power and purpose of the modern Commonwealth, praising his grandmother, The Queen, and championing her role. “I think everything my Grandmother wanted to achieve when she took this huge responsibility on, she’s managed… hearing you guys, and knowing the broad spectrum that QCT engulfs, you’re the definition of the 21st century Commonwealth, and what it means to be part of it. You are there, standing for equality, for mutual respect, and for fairness.”

At the end of the call, Harry added that the future was in the activists' hands, jesting with Meghan that they were "way too old" now. Laughing, Meghan replied:"You've got to stop, we're not old," prompting fellow panel participants to laugh. Bringing it back to a serious note, Harry points out how this is the world the young activists will inherit, to which Meghan added "And Archie," before pledging their support to the QCT once more.

Meghan and Harry zoomed in from their new home in Santa Barbara. A rep for the couple confirmed the move to People, explaining that, "the Duke and Duchess of Sussex moved into their family home in July of this year. They have settled into the quiet privacy of their community since their arrival and hope that this will be respected for their neighbours, as well as for them as a family."

Prior to California, Harry and Meghan were previously residing in Canada following their decision to step down as from their royal roles.