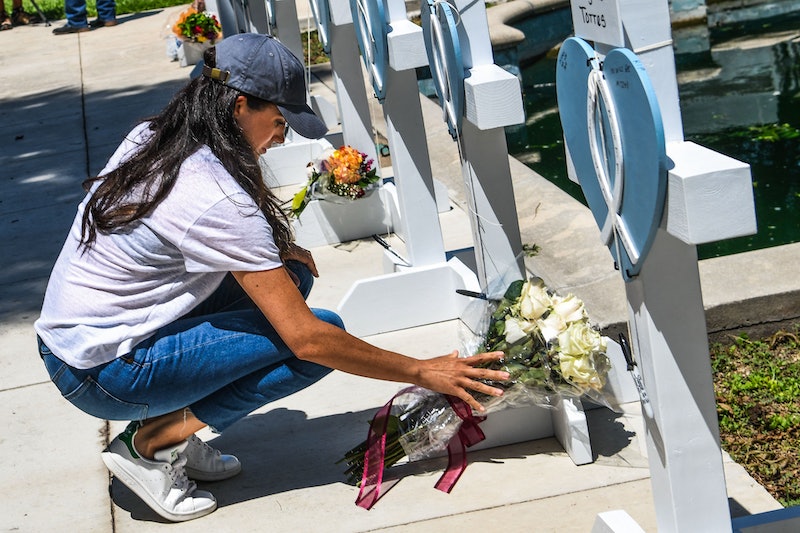 Days after 19 students and two teachers were killed in the Robb Elementary School shooting in Uvalde, Texas, Meghan Markle is among those honoring the victims and their families. On May 26, the Duchess of Sussex paid a personal visit to a memorial outside of the Uvalde County Courthouse, according to People.

As a spokesperson told the magazine, “Meghan took the trip in a personal capacity as a mother, to offer her condolences and support in person to a community experiencing unimaginable grief.” In addition to laying flowers at the memorial, BuzzFeed reports that the duchess also dropped off food for volunteers running a blood drive at the local community center. She also stuck around to help distribute food and drinks, and talk to the helpers. “It’s funny, we didn’t even know it was her until after she left and now we’re so sad,” volunteer Georjean Burnell told BuzzFeed. “I mean, to be honest, we thought she was our neighbor.”

Another volunteer, Gloria Contreras, also “had no idea who she was.” She told the outlet that Meghan had shared she was from Santa Barbara — where she lives with Prince Harry and their two children, Archie and Lilibet. “We were talking about Texas and Uvalde,” Conteras said, “and how it is to be in a small town and how everybody is so kind and warm-hearted and know we know each other and stuff and how the faith is deep-rooted.”

According to BuzzFeed reporter Ellie Hall, “Meghan avoided the press who were already at the community center.” Though the duchess didn’t comment on the tragic May 24 shooting (in person or online), she has supported those fighting for stricter gun control laws in the past. During her 2020 Girl Up Leadership Summit speech, Meghan praised young leaders for their activism. “You are reforming the criminal justice system,” she said. “You are telling your school boards, ‘We need more mental health resources for all ages.’ You’re leading coalitions to end gun violence. You are standing up and demanding to be heard, yes, but you are also demanding to own the conversation.”