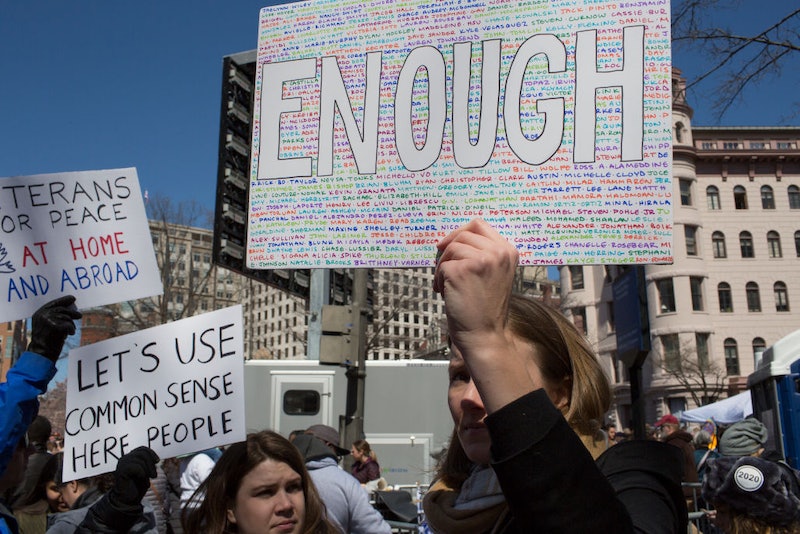 It seems like every day the headlines are filled with more news about mass shootings. Recently, it was from Uvalde, Texas where a reported 21 people were killed in an attack at Robb Elementary school. At least 19 students and two adults were among those killed. It’s still spring, and already 2022 has seen 27 school shootings, NPR reports. That’s why thousands will take to the streets on Saturday, June 11 to support March for Our Lives, a youth-led movement that demands lawmakers act to prevent more instances of violence.

Gun violence has begun to feel commonplace as the years go by — too many shootings are still fresh in the minds of American citizens. The news about Uvalde came days after a mass shooting happened in a Buffalo, New York supermarket where a gunman allegedly carried out a racist attack, killing 10 people and injuring three others. One also can’t forget about Sandy Hook, the Orlando nightclub shooting, and the San Bernardino shooting. Yet despite an increase in the frequency of mass shootings, gun control reform continues to remain a largely uphill battle in Congress.

If you’re interested in joining the rallies this weekend, you can march in Washington, DC, or find a protest near you in one of the 450 (and counting) cities and towns that plan to host a march. If you can't make it to a March For Our Lives event but would still like to support gun reform, here are some more organizations you can donate to, as well as ways to stay informed.

1. March For Our Lives

March For Our Lives is a youth-led movement fighting for a future free of gun violence. The organization advocates for legislation to raise the national standards for gun ownership, centering communities through programming and marches, and amplifying the voices of gun violence survivors, and it’s been fighting for the cause since 2018.

For more information, text MARCH to 954-954. Click here to donate to March Four Our Lives.

Commonly referred to as the Brady Campaign, this nonprofit is named after Jim Brady, a man shot and left permanently disabled during an assassination attempt on President Ronald Reagan in 1981. The organization takes a three-pronged approach to fighting gun violence. They seek to change laws, change the gun industry, and change culture, according to their website.

The group was instrumental in passing the Federal Assault Weapons Ban and Brady's Law, which mandates federal background checks for individuals purchasing a firearm. Currently, the group is lobbying for background checks to be extended to all gun sales.

Their aim is to bring the voices of "everyday Americans" into the fight to build safer communities. They advocate increased penalties for gun trafficking, education on responsible gun ownership and storage, and closing legislative loopholes that allow gun sales without background checks.

You can donate to Everytown For Gun Safety here.

Mom’s Demand Action, a part of Everytown, is a grassroots movement of Americans demanding reasonable solutions to address our nation’s culture of gun violence, according to its Twitter. By making a contribution, you’ll help fuel their volunteer-driven movement to raise awareness about gun violence, educate the public about gun laws and proper gun ownership, and mobilize grassroots supporters.

Former Congresswoman Gabby Giffords started Americans For Responsible Solutions with her husband Mark Kelly, a retired Navy captain and astronaut, after she and 18 others were shot while holding a meeting in a grocery store parking lot in Arizona.

Both are outspoken about being "strong supporters of the Second Amendment" but seek to end the gun lobby's deep political influence and Congress' inaction on gun violence. Giffords Law Center joined forces with the Law Center to Prevent Gun Violence in 2016, and together work to implement change via a push for expanded background checks, federal funding for research on the cause and impact of gun violence, and stronger gun trafficking laws.

You can support the efforts of the Giffords Law Center here.

The Johns Hopkins Center for Gun Violence Solutions is part of the Johns Hopkins Bloomberg School of Public Health and is an organization that conducts rigorous research and uses advocacy to implement evidence-based, equitable policies and programs that will prevent gun violence in our communities, according to its Twitter. “Because gun violence disproportionately impacts communities of color, we ground our work in equity and seek insights from those most impacted on appropriate solutions,” its website notes. Its aim is to provide evidence to push for change.

Donate to the organization here.

By collaborating with experts, civic leaders, and people in communities across the country, the Alliance for Gun Responsibility works to advocate for change in policies, promote education, and find evidence-based solutions, all in the hope of ending the gun violence crisis. By donating, you’ll help support its community-led programs that aim to keep people safe from shootings.

Show support by donating to the Alliance for Gun Responsibility here.

This is an organization that's dedicated to ending the gun violence crisis in Pennsylvania — a state where someone is killed with a gun every 6 hours, according to its website. Since 2002, CeaseFirePA has worked with experts, survivors, and advocates to bring impactful gun violence prevention legislation to Pennsylvania. In light of the shooting in Uvalde, CeaseFirePA is currently donating proceeds to Texas Gun Sense, a Texas-based organization fighting for evidence-based gun control policies.

Join the cause by donating to CeaseFirePA here.

More like this
6 Organizations Fighting Police Brutality That You Can Support Right Now
By Syeda Khaula Saad and JR Thorpe
15 Black-Owned Liquor & Wine Brands To Add To Your Bar Cart
By Alexis Morillo
24 History-Making Black Women You Probably Didn't Learn About In School
By Ayana Lage and JR Thorpe
25 Inspiring Quotes From Black Women To Celebrate Black History Month
By Kyli Rodriguez-Cayro and JR Thorpe
Get Even More From Bustle — Sign Up For The Newsletter
From hair trends to relationship advice, our daily newsletter has everything you need to sound like a person who’s on TikTok, even if you aren’t.