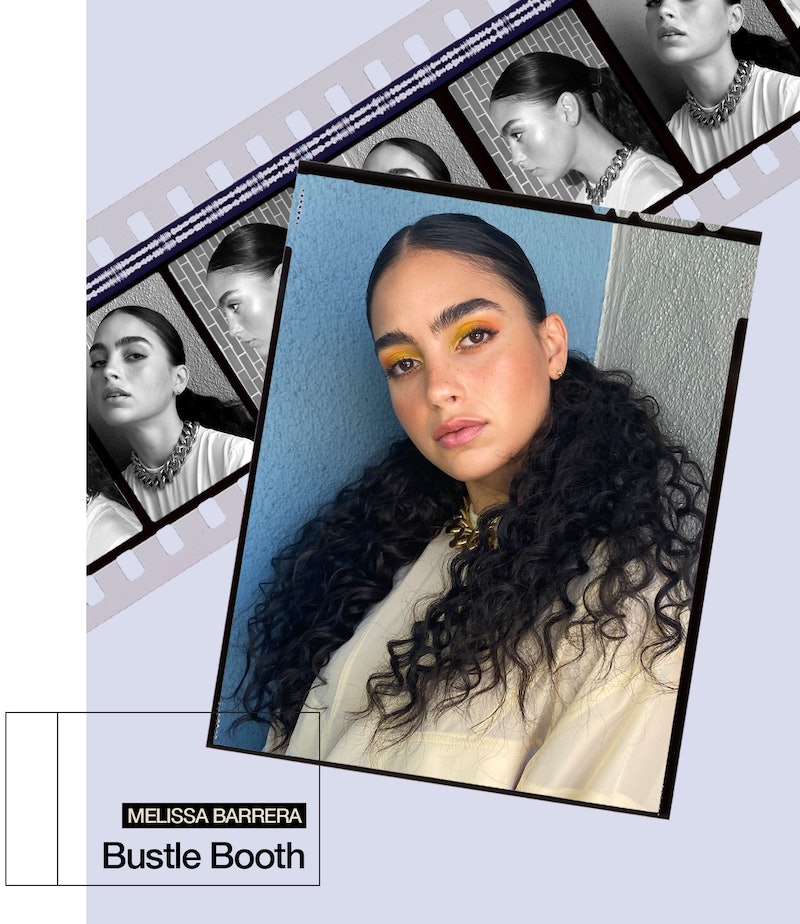 Melissa Barrera is more than excited that In the Heights is finally out — she’s relieved. “The world will get to see this secret we've kept for two years!” Barrera tells Bustle.

After being delayed due to the pandemic, the Lin-Manuel Miranda-produced adaptation hit the big screen (and HBO Max) on June 11. Barrera stars as Vanessa — an aspiring fashion designer and potential love interest for Usnavi (Anthony Ramos).

It’s basically Barrera’s dream role. The Mexican actor, singer, and dancer, whom you might know as Lyn from Starz’s Vida, has long been obsessed the 2008 Broadway show. She’d fallen in love with musical theater in high school, and had been searching for role models in the industry who looked and sounded like her, but kept coming up short — until she saw In the Heights. “I remember being completely mesmerized, so mind-blown: there was rapping and salsa in a musical?! They were speaking Spanglish and the Mexican flag was on the stage!” she says. “I didn’t even know these things were possible.”

Barrera auditioned at every open call for the musical, thinking, “‘This is the show for me. Vanessa is the role I want to play,’” but never got a callback. When she landed the part in the film adaptation, she felt a lot of pressure “do right” by the character — not least because several actors she admires, including the Tony-winning Karen Olivo, have filled Vanessa’s shoes. “My Vanessa [is] the Vanessa that some people are going to know, period,” Barrera says, acknowledging that the film will have a far bigger audience than any Broadway show ever could.

Though the character’s backstory is fleshed out in the film, Barrera really “found” Vanessa in the long, strenuous rehearsal process. Her most challenging scene, which features Vanessa as the queen of the dance floor, salsa-dancing alongside some of New York’s top performers, was a turning point. “When I saw the choreography for the club, my heart dropped out of my ass,” Barrera says. “And I also don’t dance salsa — the way that the body moves is so different that I felt like I was learning to walk.”

Mid-rehearsal, she got a look at the most intense part of the choreography. “I was like, ‘I need to leave for a second,’ and I went into the bathroom and cried. I thought, ‘[The choreographers] hate me, and I can’t do it.’ Then I let go of all my tension and cried it out.” After filming the scene over two days, she felt invincible. “I never worked so hard for anything in my life.”

Learn more about Barrera, from her love of Billy Madison to her somewhat fraught obsession with Catherine Zeta-Jones, in her Bustle Booth questionnaire below.

I don’t drink coffee! But I drink green tea with a splash of apple cider vinegar.

New York; Monterrey, my hometown; Cuidad Obregón, where my husband and I have a house and he lives; LA; and Mexico City.

I quote Billy Madison all the time. Every time someone says, “It’s hot,” I say, “Sooooo hot! Want to touch the hiney!”

I used to wake up early to watch Tom and Jerry.

I love Catherine Zeta-Jones, probably because I was obsessed with Chicago and I thought it was the greatest movie musical ever. I loved that she was an actor who could sing and dance, and I was like, “I want to do what she does.” She also did Zorro, which was another movie that I loved, even though she was playing Latin when she’s not. That’s a topic for another day.

Anything Adele. Rolling in the Deep.

Always going home and spending time with my family — I just got to be in Mexico for a week with my mom and my sisters. When I come back I’m ready to work and hustle.

She’s a great person to work with.