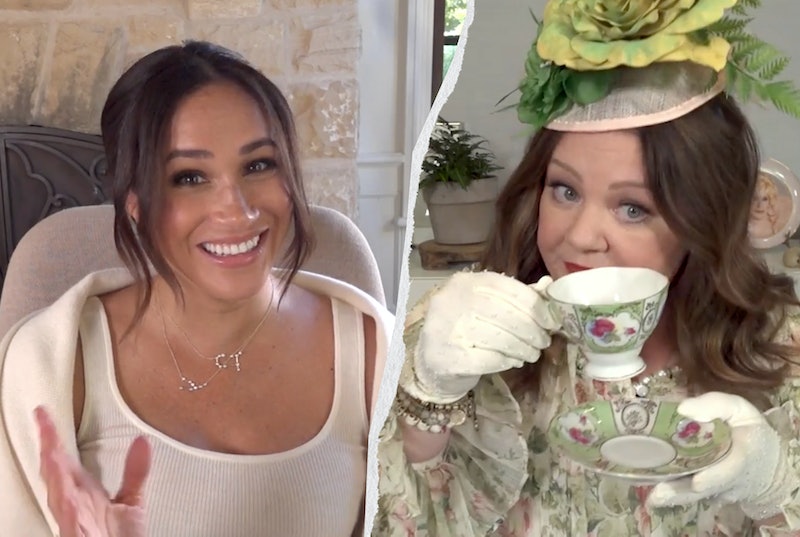 In a recent interview with Access Hollywood, the Saturday Night Live and Gilmore Girls star Melissa McCarthy revealed what really went down behind Meghan Markle’s 40th birthday video. If you recall, the video mimicked a video call between McCarthy and Markle as they discuss the latter’s plans for turning 40. McCarthy comedically throws up farfetched suggestions, such as a Suits reunion, while donning an array of extravagant hats, only for Markle to gently rebut her and reveal her true plan: the launch of Archewell’s 40x40 mentorship program.

Halfway through the video, an easter egg appears in the video to everyone’s delight: a glimpse at Prince Harry juggling outside the window. In the Access Hollywood interview McCarthy gave some details on how the moment came about. And it turns out Harry was quite nervous about his cameo moment. She told the publication: “In comes Harry, you know, and he’s like, ‘I can juggle.’ He was like ‘Is it going to be weird if I stand outside and juggle?’ And I was like, ‘Weird in a way that will make me watch it five million times!’”

McCarthy also shared her thoughts on the 40x40 mentorship program, in which Markle called on 40 of her friends to give 40 minutes of their time to help mobilise women re-entering the workforce. The actor said, “She’s doing such an amazing thing to celebrate her 40th. I just love that she’s like, ‘oh what can I do to put out some good, and help some people out.’ I was like, ‘Well, that’s awfully nice.’”

McCarthy continued to sing praises of the Duke and Duchess of Sussex. She added, “They were so sweet, and funny. I find them very inspiring. They’re carving out their own lives, they’re carving out lives for their kids. And the way she wants to celebrate her 40th is by helping and empowering other women, how do you not get behind that?”

She continued, “They don’t take themselves too seriously. They’ll do it in a fun way and see if we can drum up more people helping more women get back into the workforce. I was like, ‘Yes! What a great idea!’ I was so pleased to be a part of it.”

McCarthy also revealed that the idea behind the skit was a result of team effort between herself and the Sussexes. Interestingly, the reference to a Suits reunion came from the Duchess herself, with McCarthy saying, “I wish I could claim that idea. But it’s hers.”

More like this
Why Princess Anne Will Remain Princess Royal For Years To Come
By Sophie McEvoy
King Charles Ensured These Subtle Tributes Were Included In Queen Elizabeth’s Funeral Wreath
By Sophie McEvoy
Camilla Paid Tribute To The Queen In A Heartfelt Video Message
By El Hunt and Sam Ramsden
Will Archie & Lilibet Attend The Queen's Funeral?
By Sam Ramsden
Get The Very Best Of Bustle/UK