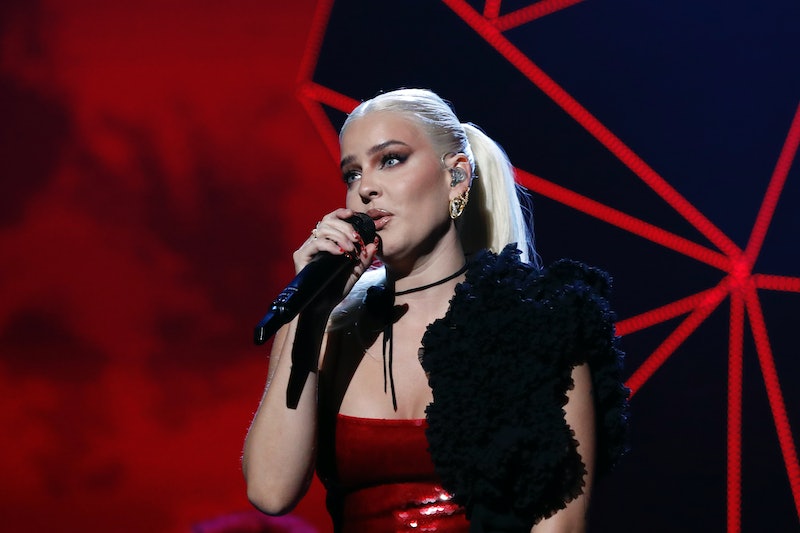 What do Madonna and Anne-Marie have in common? Aside from being blonde powerhouses and absolute music mavens, the pair share a rather painful experience: both have fallen on the BRIT Awards stage. Like Madonna in 2015 – though not quite as dramatic, granted – Anne-Marie suffered a fall at the 2022 BRIT Awards, slipping on the stairs, mid-lyrics during her performance of her “Don’t Play” with KSI and Digital Farm Animals. And Twitter obviously couldn’t handle it.

Held at O2 Arena in London and hosted by comedian Mo Gilligan, the ceremony featured powerful performances from the likes of Adele, Ed Sheeran, Dave, and Little Simz, all of whom picked up some of the night’s biggest prizes. Wearing a strapless sequinned dress, Anne-Marie tumbled to her knees, hardly breaking her song, before getting a hand from one of her dancers and carrying on with the show.

Comparisons to Madonna’s fall at the 2015 BRITs were swift on Twitter. Her first live performance at the event in two decades, her stage malfunction also involved a set of stairs – and a cape. One of her dancers was due to remove said cape which was fastened on too tightly and, combined with her rather precarious situation at the top of a set of stairs, caused quite the sensation. She too carried on, like a champ though.

The reactions were immediate: there were those who felt the pain, the horror, and the empathy for what that must have felt like. Brands jumped on the bandwagon: Specsavers offering her a visit “on us.” But perhaps best of all was Anne-Marie’s own tweet: “Didn’t need my left foot anyway.” Iconic.

Scroll on for the best reaction memes and tweets to Anne-Marie’s BRITs trip.

More like this
Twitter Is Burning As Phoebe Dynevor Reveals Daphne’s 'Bridgerton' Exit
By Sophie McEvoy
'Brookside' Is Coming Back & Soap Opera Fans Are Going Wild
By Sam Ramsden
Twitter Has Renamed Ekin-Su After *That* 'Dancing On Ice' Performance
By Sophie McEvoy
Twitter Can’t Make Up Its Mind About Ekin-Su’s 'Dancing On Ice' Skate-Off
By Sophie McEvoy
Get The Very Best Of Bustle/UK
Sign up for Bustle UK's twice-weekly newsletter, featuring the latest must-watch TV, moving personal stories, and expert advice on the hottest viral buys.