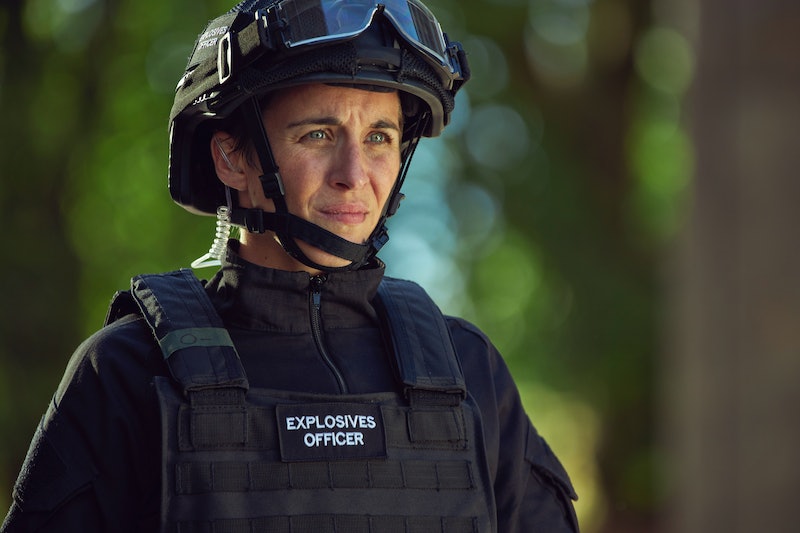 It’s safe to say Jed Mercurio’s brand new crime drama Trigger Point started off with a blast when it aired on ITV on Jan. 23. Starring Line Of Duty’s Vicky McClure as bomb disposal operative Lana Washington, the new series introduced audiences to London-based bomb disposal squad ‘EXPO’, as they thwart terrorism cases in extremely explosive scenes. Following a shocker of a cliffhanger, Twitter was quick to react with memes and reactions to ITV’s Trigger Point (especially regarding that light switch...).

The first episode of the six-part series made intense viewing, with star McClure even admitting that even she “jumped” when watching the show on Sunday night. To recap, Trigger Point’s bomb squad faced repeated near-death experiences as they explored a block of London flats where a suspected terrorist had rigged a bomb. Also starring Adrian Lester as the ex-military bomb operative, Joel Nutkins, the new series wasn’t short of nail-biting moments, from rescuing bound-up children under beds to Washington shouting orders to a terrified victim strapped with explosives. Terrifying stuff indeed.

Trigger Point audiences were quick to compare the new series, written by upcoming screenwriter Daniel Brierley, to Mercurio’s award-winning drama Line Of Duty, however, as promised McClure’s new role “is very different” from Line of Duty’s Kate Fleming and fans appear to be similarly gripped to the shocking plot.

With that said here’s a round up of all the best memes and reactions to Trigger Point.

Some may say the show is a slow burner with an explosive end...

Lana, please, not the big light

RIP to my nervous system

Forget the bombs, this was a strong moment...

More like this
Twitter Has Renamed Ekin-Su After *That* 'Dancing On Ice' Performance
By Sophie McEvoy
Twitter Is Having A Field Day Over Mr Blobby’s Costume Selling For £62k
By Catharina Cheung
Twitter Can’t Make Up Its Mind About Ekin-Su’s 'Dancing On Ice' Skate-Off
By Sophie McEvoy
Twitter Is Burning As Phoebe Dynevor Reveals Daphne’s 'Bridgerton' Exit
By Sophie McEvoy
Get The Very Best Of Bustle/UK
Sign up for Bustle UK's twice-weekly newsletter, featuring the latest must-watch TV, moving personal stories, and expert advice on the hottest viral buys.