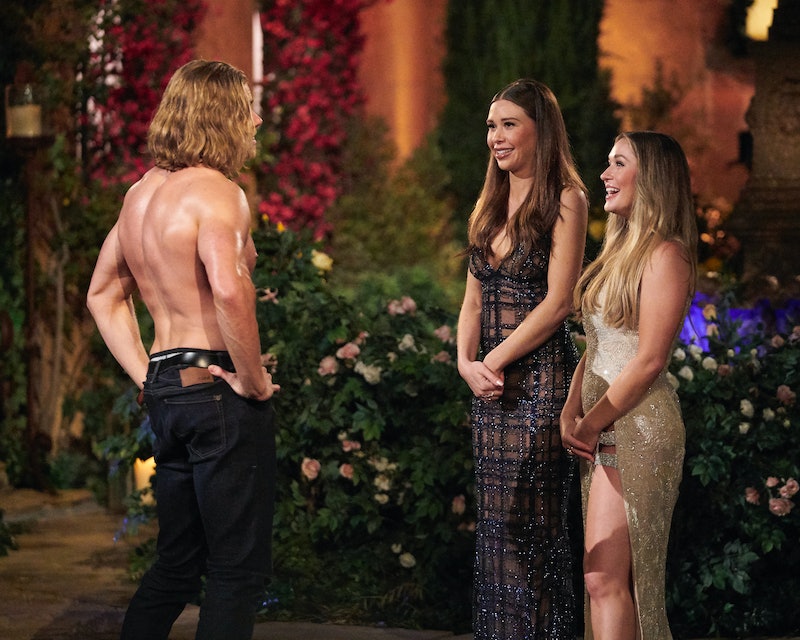 Can you feel it in the air? The Bachelorette is back, and so are the chaotic limo arrivals. One suitor during Gabby Windey and Rachel Recchia’s Bachelorette season, Jacob Rapini, made an especially bold first impression — by ditching his shirt, sporting long blonde hair, and bringing a totally Fabio-esque vibe to his first night at the mansion.

The Scottsdale-based mortgage broker rode in on a literal white horse before introducing himself to Gabby and Rachel. “I know this looks like a cover to a romantic novel,” he says. “But I’m only here for a happy ending.” The Bachelorettes were totally feeling Jacob — not just chemistry-wise but literally, too, as they took turns wiping oil from his super shiny chest. You know, for moisturizer!

Even Jacob’s fellow contestants were looking on in awe — and concern. “He’s gonna get chilly,” one suitor remarked. And, yeah, not throwing on a jacket during his entire first night couldn’t have been that comfortable.

In a separate conversation with Gabby later on, Jacob shared a list of “attributes” he’s looking for in a wife — including a sense of humor and physical chemistry. Gabby seemed down with it all. “Shirtless Jacob, his pecs are rock hard,” she remarked in a confessional. “I can’t stop looking at them.” She also praised the “intentional” way Jacob came to their conversation.

Twitter shared their thoughts on the shirtless suitor, too.

Want to learn more about Jacob on The Bachelorette — besides his penchant for always being beach-ready? Here’s what we know, according to his official ABC bio:

Jacob knows exactly what he wants in a wife. He admits he's picky, but since he's looking for a love to last a lifetime, he doesn't see that as a bad thing. Jacob's ideal wife will turn heads with her looks wherever she goes and have beauty on the inside that matches. For Jacob, keeping his fitness routine in check is high on the priority list, so his ideal partner should want to maintain a healthy lifestyle and be able to have fun working up a sweat both in and out of the gym. Jacob is ready to let his guard down when he meets someone who checks all of his boxes.

Jacob does appear in the promo for the rest of the season — shirtless, again, but sitting by the pool this time so he’s not the only one. He also seems to delve into some of the inevitable drama of the season, apparently admitting that he’s not sure whether he’s more into Gabby or Rachel. “Yeah, it’s gonna be tough to decide,” he says in the brief clip. While he surely made an impression at first, fans will have to wait and see if the Bachelorettes decide if Jacob could be the one.