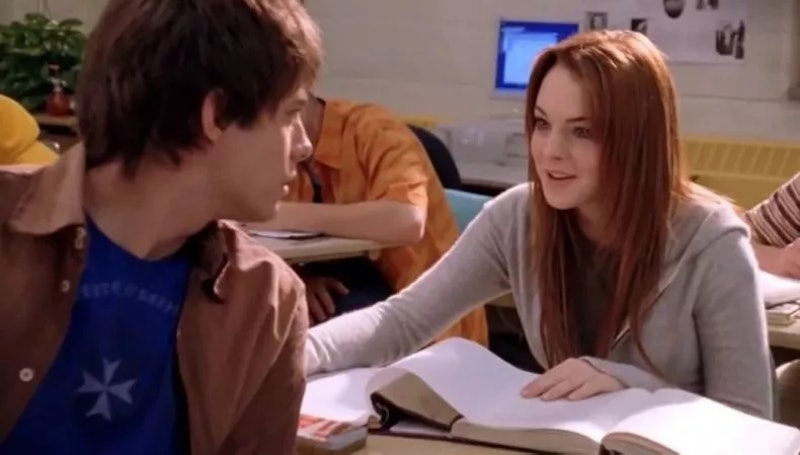 It’s the most anticipated celebration of the holiday season for fans of 2004’s Mean Girls — no, not Halloween, Thanksgiving, or Christmas. It’s Mean Girls Day! Fans have been celebrating the Tina Fey-penned film every year on Oct. 3 since its release 18 years ago thanks to one pivotal scene. In it, the hunky Aaron Samuels (played by Jonathan Bennett) turns around in his desk and asks Cady Heron (Lindsay Lohan), “What day is it?” Cady, who had a major crush on Aaron, replies, “It’s October 3rd.” And thus, a national holiday was born.

The film’s stars and creative team routinely celebrate Mean Girls Day with their fans on social media. This year, Lohan used Mean Girls Day to her advantage, announcing her new Netflix holiday film Falling For Christmas, which will premiere on Nov. 10. Meanwhile, Bennett and Daniel Franzese, who played Damian Leigh in Mean Girls, celebrated by posing for selfies in New York City and putting a spin on Aaron’s iconic question. “What gay is it?” Bennett captioned his Twitter post, nodding to how the three teenage male leads of Mean Girls, including themselves and Rajiv Surendra, have all come out as gay over the years.

Naturally, fans are commemorating Mean Girls Day again in 2021 by re-sharing the iconic quote on Twitter for the billionth time and crafting some hilarious memes.

In response, some Twitter users are poking fun at the people celebrating Mean Girls Day.

Fans are also celebrating Lohan’s film comeback — and what a genius strategy it was to announce it on Mean Girls Day.

More like this
The First Trailer For 'That '90s Show' Includes So Many Nods To The Original Series
By Jack Irvin, Alyssa Lapid and Grace Wehniainen
The 'Love, Lizzo' Harry Styles Scene Is Just 1 Moment That Made Fans Feel Seen
By Brad Witter
Lindsay Lohan Just Recalled A Hilarious 'Parent Trap' Story
By Sam Ramsden
See 'Twilight' Stars Together Again For A Sweet Cullen "Family Reunion"
By Stephanie Topacio Long
Get Even More From Bustle — Sign Up For The Newsletter