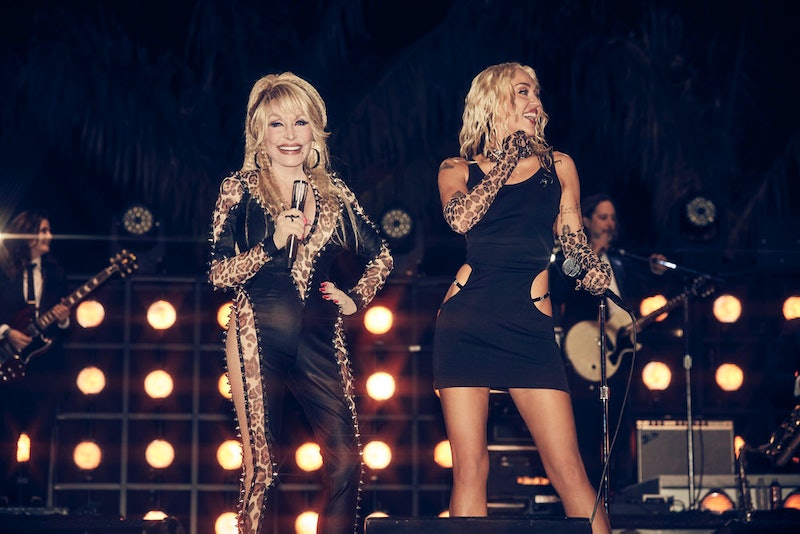 New Year’s Eve was a big night — from CNN’s “sober” show to Paris Hilton’s surprise performance at Miley’s New Year’s Eve Party. However, no list of the evening’s most memorable moments would be complete without the latest — and arguably greatest — Dolly Parton and Miley Cyrus collaboration. The country music icon joined her goddaughter as co-host of her NBC special in Miami on Dec. 31, and they performed several duets together that completely blew fans away.

Twitter lit up as Parton and Cyrus sang together, and countless users were full-on gushing about their numbers. They sang a selection of their respective hits, including Cyrus’ “Wrecking Ball” and Parton’s “I Will Always Love You” and “Jolene.” Plus, they performed Patsy Cline’s “Walkin’ After Midnight’ and Joan Jett’s “I Love Rock ’n Roll.” Through it all, they inspired fans to use superlatives like “one of the most beautiful” and “greatest performances of all time.”

It was “Wrecking Ball” into “I Will Always Love You” that convinced a fan it was “one of the greatest performances of all time.” That person wasn’t alone in their appreciation, either. Seeing the two songs made many fans feel like 2023 was already guaranteed to be a good year, and it gave others chills. It was “EMOTIONAL,” as NBC Entertainment aptly put it.

Their “Jolene” duet was also widely praised. Again, there were fans who felt like 2023 had already proved itself to be an amazing year. There was also one enthusiast who proclaimed that they “would sell [their] soul” to see Cyrus and Parton perform the song live, and another who considered it “the best live music performance” they’d ever seen on a New Year’s Eve special.

Seeing Parton and Cyrus together for one show wasn’t enough for many fans. One fan demanded the two artists “do an On The Run style tour immediately,” and another requested a studio version of their “Wrecking Ball” duet.

Less specific but no less complimentary were the people who simply expressed their love for the godmother-goddaughter duo. They described Cyrus and her “Aunt Dolly” as “the two most important women in existence,” “queens,” and more.

The two have found ways to work together many times in the past — such as Parton’s guest role on Cyrus’ early 2000s Disney show, Hannah Montana, and their 2017 duet “Rainbowland” — so fans can rest assured that the outlook for another collaboration seems promising. “She is the best,” the “Midnight Sky” singer told Jimmy Fallon of Parton on The Tonight Show in the leadup to Miley’s New Year’s Eve Party. “It is, like, unparalleled how gracious she is in every single room that she is in.”

More like this
Twitter Is In Awe Of Taylor Swift’s “Lavender Haze” Music Video
By Jake Viswanath
Twitter Is Saying The Same Thing About Beyoncé's Renaissance World Tour
By Shahed Ezaydi
Hilary Duff's Husband Matthew Koma Has Her Name Tattooed On His Butt
By Jake Viswanath and Stephanie Downs
Will Beyoncé Perform At Or Attend The 2023 Grammys?
By Jake Viswanath
Get Even More From Bustle — Sign Up For The Newsletter
From hair trends to relationship advice, our daily newsletter has everything you need to sound like a person who’s on TikTok, even if you aren’t.