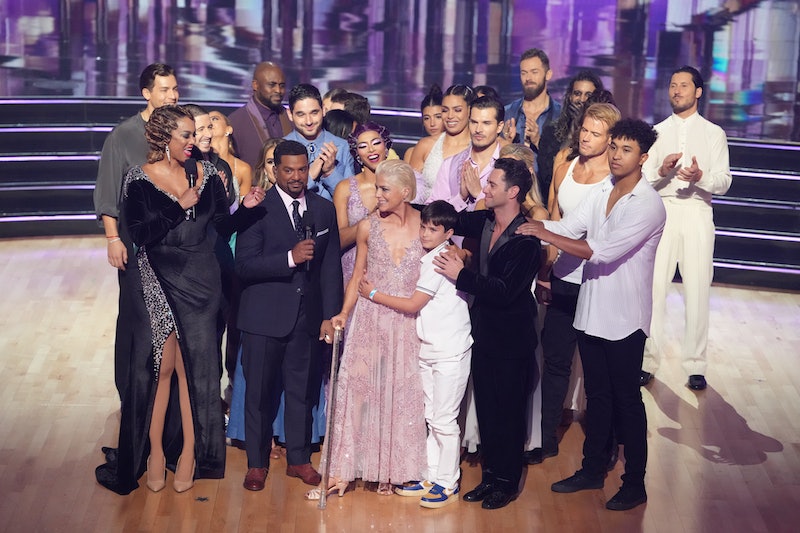 For Week 5 of Dancing with the Stars Season 31 on Oct. 17, the contestants looked back on the most memorable year of their lives, turning their sentimental memories into contemporary, jazz, and ballroom routines. By the end of the night, there was no dry eye in the house for a very particular reason. One beloved contestant announced her departure from the show due to medical reasons, but she gave a final performance that left the entire audience — in real life and on Twitter — in tears. Read on for the highlights from DWTS Most Memorable Year week.

TV and film star Selma Blair chose 2018 — the year of her multiple sclerosis diagnosis — as her most memorable year, seeing it as the “beginning of my recovery as a person.” Part of that recovery means having to drop out of DWTS on doctor’s orders due to the chronic illness. “I’ve pushed as far as I could,” she said. “It’s way too much for the safety of my bones. There’s just intensive bone trauma and inflammation among rips and tears, so I could do extensive damage that I, of course, do not want.” Before exiting the show, she was cleared for one last “gentle dance” with partner Sasha Farber. The duo performed a waltz to Andra Day’s “What The World Needs Now is Love” and received the season’s first perfect score of 40, sending Blair out with a much deserved celebration.

Blair acknowledged the moment in a thorough Instagram caption:

Daniel Durant’s most memorable year was 2019, when he was cast in CODA that would go on to win the Oscar for Best Picture nearly three years later. The deaf actor and partner Britt Stewart honored the film with a barefoot contemporary routine that also spotlighted his sign language interpreter. Durant received two eights and two nines for a score of 34 out of 40, his highest score in the competition yet. But for many Twitter viewers, the score wasn’t high enough.

Charli D’Amelio chose 2022 as her most memorable year, citing it as the year that she learned how to manage her mental health and stop letting anxiety consume her life. She channeled that healing energy into a contemporary routine with partner Mark Ballas to Lewis Capaldi’s rendition of Billie Eilish’s “when the party’s over” that blew both the judges and the audience away. The duo earned the first 10s of the season but came just one point shy of a perfect score, earning a 39 out of 40, a victory that put her at the top of the leaderboard and was celebrated by Twitter nonetheless.

After Blair announced her departure from the show, no other contestants were eliminated from the competition. Instead, the cast came together to celebrate Blair at the end of the show, and even her Cruel Intentions co-star Sarah Michelle Gellar penned an emotional tribute to her friend on Instagram. “Long before @dancingwiththestars I knew you were a 10, and now the world knows,” she wrote. “Selma I’ve never been so proud of you (and I’m often proud of you). You make the rest of us believe that we can do anything. That we can never give up.”

More like this
RHOP’s Robyn Dixon Explained Why Juan Paid For Another Woman's Hotel Room
By Brad Witter
Everything To Know About 'The Real Housewives Ultimate Girls Trip' Season 4
By Jake Viswanath
Andy Cohen Apologized To Larsa Pippen After A 'RHOM' Season 5 Reunion Dust-Up
By Brad Witter
Hannah Ann Got Engaged 3 Years After 'The Bachelor' & The Proposal Was Dreamy
By Grace Wehniainen
Get Even More From Bustle — Sign Up For The Newsletter
From hair trends to relationship advice, our daily newsletter has everything you need to sound like a person who’s on TikTok, even if you aren’t.