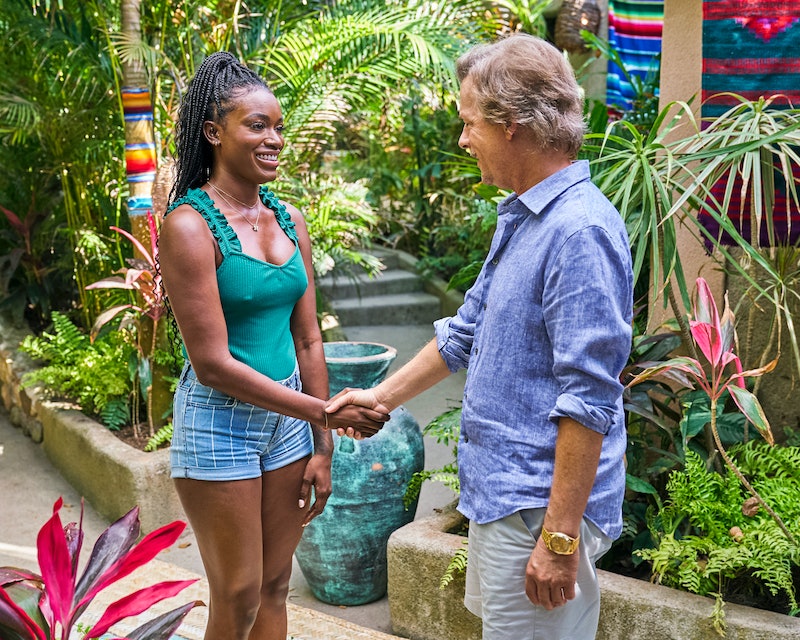 Every good show needs a good cast of characters, and Bachelor In Paradise never disappoints when it comes to memorable contestants. The first episode, which aired Aug. 16, wasted no time delivering standout moments, thanks in large part to Tahzjuan Hawkins. She first appeared in the franchise during Colton Underwood’s Bachelor season back in 2019 before later appearing on Season 6 of Paradise that same year. Her triumphant return to Paradise in 2021 has already garnered the support of the internet thanks to her bubbly and playful personality.

For those who don’t remember, Tahzjuan’s first stint in Paradise was punctuated by an infamously sweaty date with Bachelor Nation favorite John Paul Jones. Unfortunately for Tahzjuan, her date was all heat and no sultriness, resulting in the then-23-year-old spending an entire evening dripping with sweat. Two years later, Tahzjuan’s perspiration is back and holding centerstage — she spent most of Episode 1 doing all she could to combat the Mexico heat, including spending an entire sequence rubbing a massive cube of ice across her face and neck.

Unfortunately for Tahzjuan, however, the tropics got the best of her.

But if Tahjzuan’s sweaty antics and efforts to alleviate her bodily functions didn’t make her intriguing enough, she also sparked up a relationship with Tre from Katie’s season of The Bachelorette. It’s always exciting when a fan favorite finds a love connection, but in Tahjzuan’s case, this isn’t the first time she’s dabbled in romance with a member of Tre’s family. Yep, she revealed to Tre that she’d once dated his uncle. Naturally, that piqued Twitter’s interest.

For all of the theatrics that take place in Paradise, Tahjzuan cementing herself as the main character is a massive indication of her power.

Whether or not she finds love, it’s undeniable that Tahzjuan makes for some incredible television. Hopefully, she can deal with the heat well enough to establish a relationship, but if not, audiences will surely be just as content with more sweaty Tahzjuan escapades.