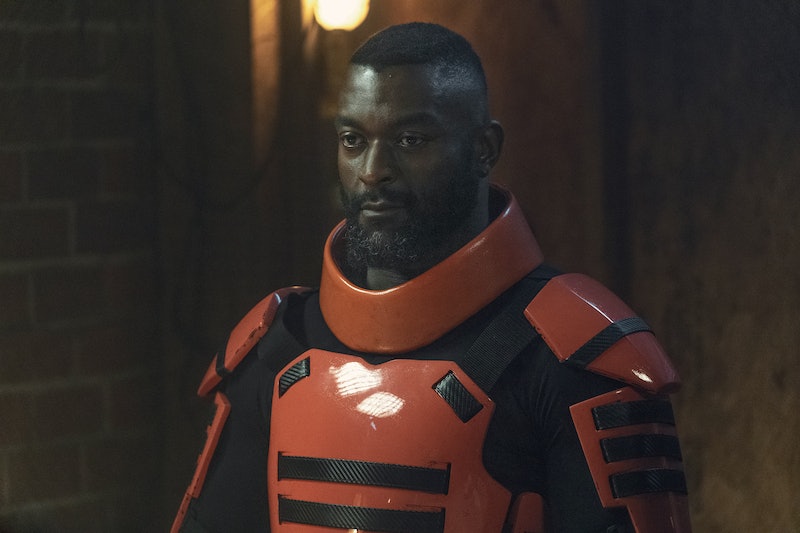 Spoilers ahead for The Walking Dead Season 11, Episode 2. Now that the survivors are finally on the cusp of learning more about the innerworkings of the Commonwealth, viewers can expect The Walking Dead’s world to open up in a way we haven’t seen since Alexandria was introduced many seasons ago. Several Commonwealth figures from the Walking Dead comics have yet to be introduced, like Pamela Milton and Lance Hornsby, but we’ve already met one of the community’s key players: Mercer.

Played by Michael James Shaw (Avengers), Mercer is the leader of the Commonwealth military. As we’ve seen in the first two episodes of Season 11, he’s much more than a soldier and appears to have major pull in deciding who gets to call the community “home.” The comics tell us that Mercer’s vibrant armor — or “pumpkin-colored space suit,” as Ezekiel put it — is not the only thing that sets him apart from the community he’s tasked with protecting.

As Mercer reveals at the end of Episode 2, he went to West Point — a similar background to his comics character, who’s a former Marine. Since we know that the Commonwealth is all about maintaining pre-apocalypse social roles, him being in the military makes sense. But even though Mercer is a big name in the community, he doesn’t completely buy into their ideals. As Den of Geek writes, he’s a sensitive person who realizes that the social inequality within the Commonwealth isn’t unsustainable. He’s been itching to overthrow the powers that be and remake the community — and in the comics, the arrival of the survivors is the spark that enables him to take the leap.

As we’ve already seen in Season 11, Mercer seems to have a soft spot for the group: despite his outward stoicism, he offers Ezekiel water and Eugene a tissue, and is caught watching as they all convene in holding. Mercer was also moved enough by Eugene’s teary tell-all to connect him with his radio pen pal, Stephanie. So expect more surprises from Mercer in the rest of the season: as Walking Dead showrunner Angela Kang told Den of Geek, Shaw’s ability to play “unpredictable” and “vulnerable” is what earned him the part.

Speaking of vulnerable, one of Mercer’s sweetest storylines from the comics is his relationship with Princess. Of all the tragic couples in The Walking Dead, theirs is a rare romance that lasts to the very end of the story. We saw the beginning of their connection in Episode 2, when Princess (who has a knack for humanizing the masked, faceless Commonwealth soldiers) flashed him a friendly peace sign as he watched her group. Sure, Mercer walked away in a huff, but the moment may portend more memorable interactions between the two in episodes to come.