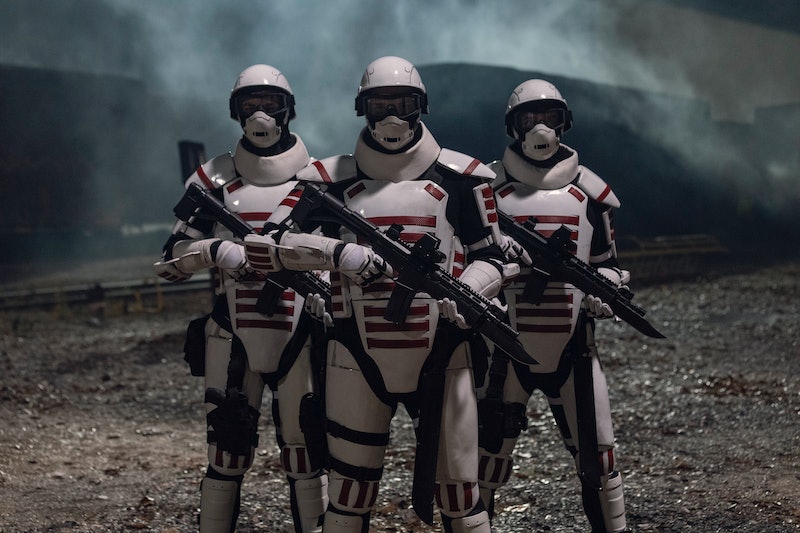 Remember the “Stormtroopers” who showed up at the end of The Walking Dead's midseason finale in October? Though they were never mentioned by name, comic book readers instantly recognized the fearsome, heavily armored soldiers as part of The Commonwealth community. Now that the show is returning for the back half of Season 10, we'll likely be seeing at least a little more of them. But what exactly is their deal? Is this more of a Woodbury or Alexandria situation?

The Commonwealth are not actually a community, but rather a community of communities. About 50,000 people are part of the group, which includes various settlements and a serious military presence (even by apocalypse standards) to which Eugene, Ezekiel, Princess, and Yumiko have already been introduced.

At The Commonwealth, there's an arena for concerts and sports, as well as restaurants, technology, and a semblance of life before walkers. But some of it is a little too reminiscent of the old world. For example, residents are divided into a class system based on the jobs they used to hold in their past, pre-apocalypse lives. (This leads to serious tension and Rick is ultimately assassinated in the comics for not falling into line.)

Viewers may also be weary of the leader of The Commonwealth, Pamela Milton – not just because new authority figures always raise red flags at this point, but because she calls herself the governor of the community. It's a useful title, and like the leader of Alexandria, she's a former politician... but "governor" still brings to mind maniacal leadership and walker heads in fish tanks, even after all these years.

It remains to be seen how much of The Commonwealth will be explored in Season 10, or if the bulk of this new environment will be fleshed out next season. The comics end at The Commonwealth, but The Walking Dead won't be coming to a close any time soon, at least as a franchise. The original series will end after a super-sized Season 11, but Daryl and Carol are set lead their own spinoff series. Perhaps the Commonwealth will help to bring the franchise into truly uncharted territory.