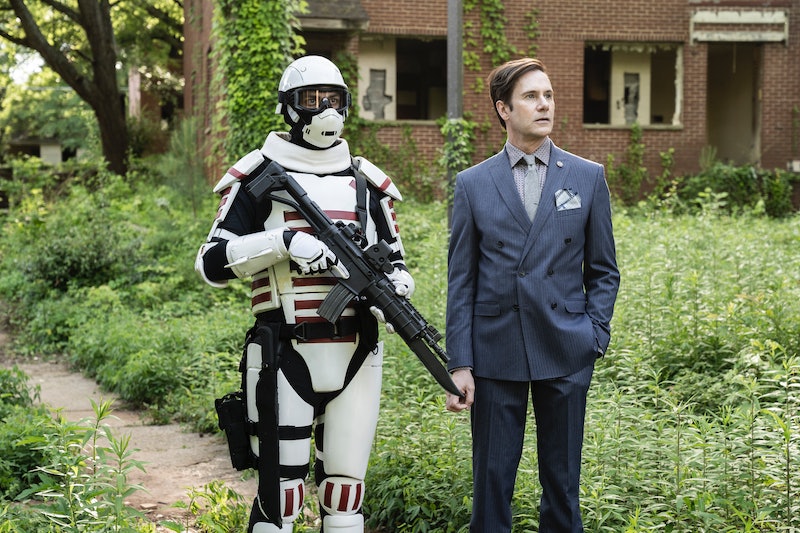 From an apparent Maggie-Negan team-up to more angst between Carol and Daryl (and a dangerous situation for Dog), there was a lot to absorb in the trailer for The Walking Dead Season 11. But one of the most tantalizing moments arrived in the very last few seconds. In a ‘90s-esque commercial for the Commonwealth, we got our first glimpse inside the mysterious community, which is replete with busy people, happy kids, and a well-dressed man named Lance Hornsby (played by Eighth Grade’s Josh Hamilton). “Welcome to the Commonwealth,” he says with a smile.

Though the new setting seems like a happy one, viewers are right to be wary — remember how nice Terminus sounded on the radio? Plus, Lance is at one point flanked by Commonwealth soldiers, and the cheery clip cuts to a scene of Eugene being beaten by one of them. Is the Commonwealth a force for good or bad? It’s hard to say at this point, but fortunately, The Walking Dead comics provide a clearer idea of who Lance is and how he functions in the greater Commonwealth hierarchy.

Lance Hornsby Is A High-Ranking Member Of The Commonwealth

In the comics, Lance has a few high-ranking roles within the Commonwealth. At first, he’s introduced as part of the not-so-welcoming committee that interrogates Princess and crew upon their arrival. As Comic Book reports, Lance took a firm approach to the newcomers but seemed to be impressed by them, too. “You seem like strong-willed people,” he says. “Don’t prove my first impression to be false.”

Because the Commonwealth is so keen on preserving the past way of life, new residents typically take up their old social standing and profession. For Lance, that meant working in an administrative role as the Commonwealth bookkeeper and deputy governor, per Screen Rant.

As CinemaBlend explains, Lance may not be a total bad guy, but “his loyalty is not guided by a moral balance.” Rather, his greatest allegiance seems to be to his community and the woman who runs it all, Governor Pamela Milton. Unsurprisingly, our group’s arrival in the Commonwealth shakes things up in the comics — eventually, a whole revolution breaks forth — and Lance finds himself tasked with quelling the tension to preserve the community’s carefully crafted status quo.

Even though Lance isn’t the head of the Commonwealth, his proximity to Governor Milton (and discretion in deciding who gets to call the community “home”) positions him as a powerful new force worth watching out for in the weeks ahead. Of course, he could just as easily side with the survivors; it wouldn’t be the first time a leader’s righthand man rebelled against authority on The Walking Dead. Just think back to the Governor and Milton Mamet’s tense friendship turned sour in Season 3.