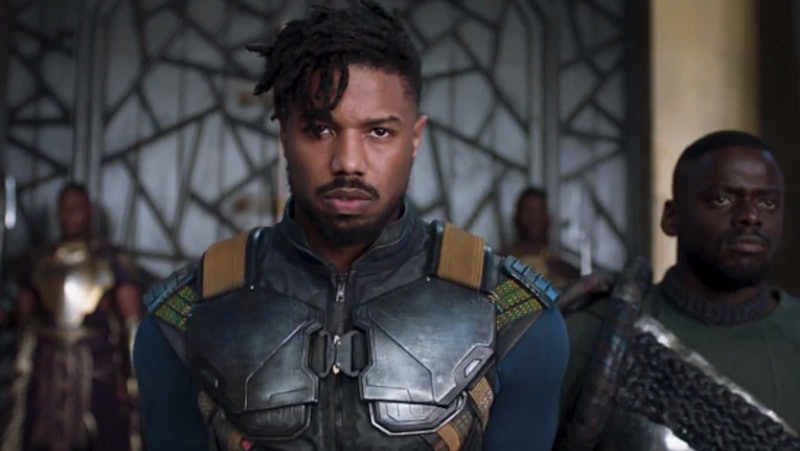 Wakanda villain Erik Killmonger may have died at the end of 2018's Black Panther, but here's an alternative movie pitch: More Michael B. Jordan, all the time. Killmonger's real-life persona agrees with this sentiment, too. Michael B. Jordan revealed that he would return to Black Panther 2 if he were approached by filmmakers. In an interview with People on Jan. 27, Jordan chatted about the sequel and the loss of co-star Chadwick Boseman, who died in August 2020 from colon cancer at the age of 43.

"That's something that is very, very near and dear to my heart for a lot of obvious reasons," Jordan said of the film, adding of Boseman, "[I] had a really tough year losing somebody close to me, and what that means for that franchise is devastating." The Just Mercy actor also spoke about how much he loved playing the character and working with director Ryan Coogler. "It's family," he said. "We created a family over there, so to be able to be in that world again is something that, I think, will always be on the table in some capacity."

In 2019, rumors began swirling that Jordan would somehow reprise his role as King T'Challa's (Boseman) nemesis in the sequel. Producer Kevin Feige, however, shut down all speculation as "pure rumor" and told BET, "Coogler is just only in recent weeks sitting down at his keyboard and beginning to outline the movie. It's early, so nothing is set yet in any way that far."

It came after Black Panther star Angela Bassett was asked about the sequel earlier that year at a red carpet event, answering "I would assume so" when asked if the original cast would return. Her husband, actor Courtney B. Vance, then chimed in and said, "Yes, just go ahead and say it, yes! Everyone will be there, including Michael B."

Not much has been revealed yet about the plot of Black Panther 2, scheduled for a July 8, 2022 release, except that it will explore the world of Wakanda and much of the supporting characters introduced in the first film. Marvel confirmed that the titular role would not be recast following Boseman's death, but instead would continue to honor his legacy. Bassett, Winston Duke, Lupita Nyong'o, and Letitia Wright will reprise their roles, with Wright taking on a more expansive part.

More like this
Twitter Is Overjoyed By Angela Bassett’s Record-Making Oscar Nomination
By Maxine Harrison
Reese Witherspoon Confirms This Fan Favorite Will Return For 'Legally Blonde 3'
By Jake Viswanath
Vanessa Hudgens Is Reportedly Engaged To Cole Tucker
By Jake Viswanath
Alicia Silverstone Revives Her 'Clueless' Character In This Super Bowl Commercial
By Jake Viswanath
Get Even More From Bustle — Sign Up For The Newsletter
From hair trends to relationship advice, our daily newsletter has everything you need to sound like a person who’s on TikTok, even if you aren’t.