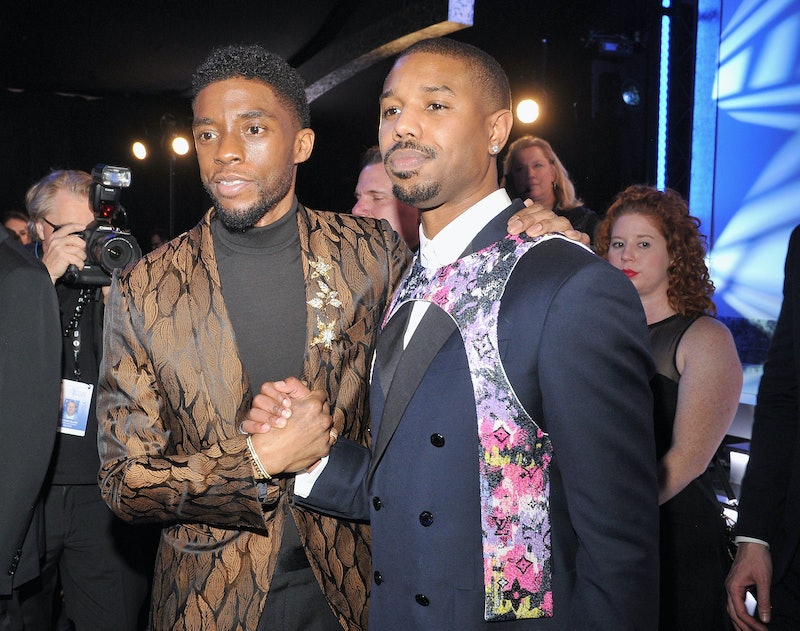 The 2019 Screen Actors Guild Awards was a big night for Black Panther fans everywhere — and not just because the film's cast took home the biggest prize of the night. Spoilers for Black Panther ahead. The Black Panther cast hinted that Michael B. Jordan might return for the film's sequel, despite the fact that his character, Erik Killmonger, died at the end of the first blockbuster.

Before the show kicked off on Sunday, Jan. 27, Courtney B. Vance seemed to confirm that Black Panther fans hadn't seen the last of Jordan, while his wife, Angela Bassett, was being interviewed on the red carpet. During a conversation with Entertainment Tonight reporter Nischelle Turner, Bassett — who played matriarch Ramonda in the Marvel movie — said "I assume" that "everybody" would return for the highly-anticipated Black Panther 2.

In response, Vance hinted that they really did mean everybody: "Yes, just go ahead and say it, yes! Everyone will be there, including Michael B," he said.

And though Turner did point out that Killmonger seemed to die at the end of the first film, Bassett admitted "[We didn’t technically see him] go into the ocean, no," which hinted at the possibility that Jordan could return once more.

Of course, Vance and Bassett weren't the only people hinting at Jordan's return; during a post-win stop at the press room, the actor himself hinted that his time in Wakanda wasn't over, as reported by Variety. While he made sure to that he was "taking myself out" of the running for Black Panther 2, it seemed to be a quick save after he began talking about the casts' hopes for the sequel.

Discussing the influence of the film's writer and director, Ryan Coogler, Jordan explained, "To be able to build on that legacy, and those characters and the world that Ryan built ... if there's an opportunity to come back and do a second one — I mean, taking myself out of the situation — but for everybody to come back, I think I speak for everybody up here that it would be a tremendous accomplishment."

In October, it was confirmed that Coogler would return to write and direct Black Panther 2, with insiders telling The Hollywood Reporter that filming is set to begin on the exciting sequel as early as sometime this year. A few months earlier, Marvel Studios president Kevin Feige told Entertainment Weekly that plans for the sequel had been in the works since before the first Black Panther even hit theaters.

"Nothing specific to reveal [about the sequel], other than to say we absolutely will do that," Feige said at the time. "One of the favorite pastimes at Marvel Studios is sitting around on a Part One and talking and dreaming about what we would do in a Part Two. There have been plenty of those conversations as we were putting together the first Black Panther. We have ideas and a pretty solid direction on where we want to head with the second one."

In addition to seeing many of the cast's familiar faces return for Black Panther 2, there are also rumors that actor and musician Donald Glover could possibly journey to Wakanda for the sequel, with U.K. publication Metro reporting that Glover was in talks to play the new villain. (Bustle reached out to Marvel Studios at the time, which declined to comment on rumors.)

A source told Metro, "Ryan Coogler is currently mapping out Black Panther’s sequel and has written in a number of new characters that movie-goers will be introduced to when it premieres. One of those characters, if he gets his wish, will be played by Childish Gambino. Nothing is set in stone but 'informal talks' [are happening] between Ryan, Gambino, and reps from Marvel and Disney to see if they can make it happen." Metro also reported that Coogler was in talks with Jordan to see if he too, would return for the sequel, though again, those rumors remain unconfirmed.

Whether or not Michael B. Jordan does return to Wakanda for Black Panther 2, it's clear that fans of the superhero franchise will be thrilled to see what Coogler and the cast come up with for the highly-anticipated sequel.

More like this
Lego Just Announced Its 'Black Panther' Set Release Date
By Maxine Harrison
Nicola Coughlan Shared A Lady Whistledown Excerpt From ‘Bridgerton’ Season 3
By Grace Wehniainen, Alyssa Lapid and Sam Ramsden
The New Bachelor Will Be Announced Next Week & Here Are The Top Contenders
By Grace Wehniainen
The 'Bachelor In Paradise' Schedule Shifts To 4 Hours Every Week After The Season 8 Premiere
By Brad Witter
Get Even More From Bustle — Sign Up For The Newsletter