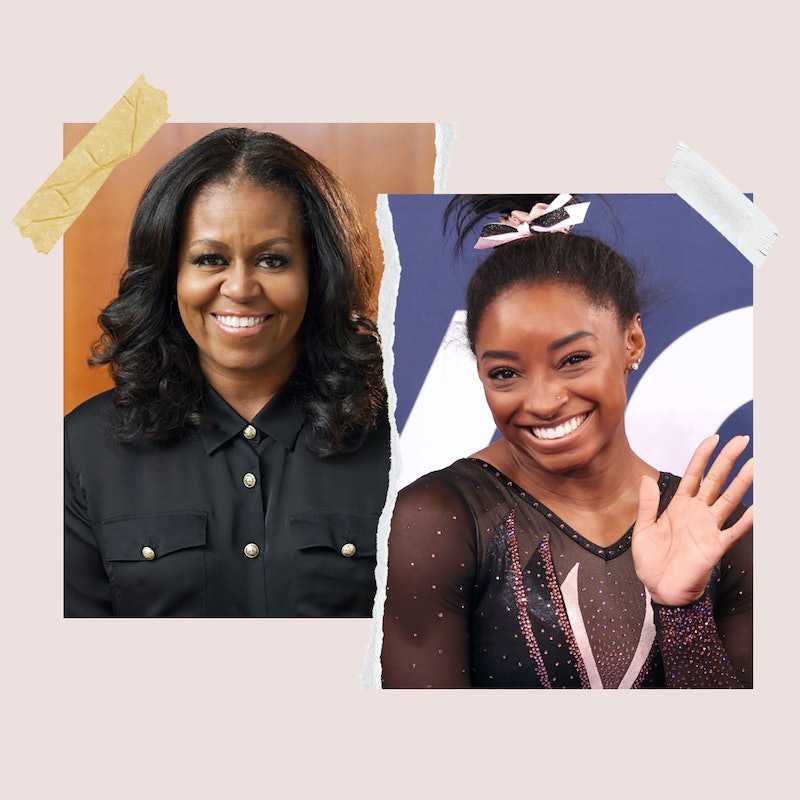 Michelle Obama wants Simone Biles to know that she has her full support. After the 24-year-old gymnast pulled out of the women’s gymnastics team finals at the Tokyo Olympics for mental health reasons, the former First Lady took to Twitter on July 27 with some words of wisdom for the young athlete. “Am I good enough? Yes, I am,” Obama wrote, sharing a mantra that she practices daily. “@simone_biles, we are proud of you and we are rooting for you. Congratulations on the silver medal, Team @USA!”

On Twitter, USA Gymnastics was the first to confirm that Biles wouldn’t be participating in the finals, but that her participation in other events was still up in the air. “Simone has withdrawn from the team final competition due to a medical issue,” the tweet read. “She will be assessed daily to determine medical clearance for future competitions.” Later, Biles explained to the press that she decided to take a step back from the competition to protect her mental health.

“Whenever you get in a high-stress situation you kind of freak out,” the gymnast said, according to CNN. “We have to protect our body and our mind. It just sucks when you’re fighting with your own head.” Biles went on to explain that although she’s physically OK, the pressure of the Olympics impacted her in other detrimental ways. “Physically, I feel good, I’m in shape,” she said. “Emotionally, that kind of varies on the time and moment. Coming to the Olympics and being head star isn’t an easy feat, so we’re just trying to take it one day at a time and we’ll see.”

Fans quickly flooded Biles’ social media with messages of support. Not only were they relieved that the four-time Olympic gold medalist was prioritizing her mental health, but they were also glad that she didn’t sustain any serious physical injuries. Per the New York Times, Biles stumbled on one of her landings after opting out of a twist. Later, she was seen exiting the competition floor with team doctor Marcia Faustin and reportedly returned with a heavily strapped foot. “Physically she is fine,” Biles’ coach reportedly told NBC. “But she is done for tonight.”

Michelle Obama was one of many high-profile celebrities to react to Biles’ decision. “I feel sick to my stomach; it’s horrible,” the gymnast’s former Olympic teammate Aly Raisman told Today. “I’m obviously praying that she’ll be able to compete in the all-around final.” Figure skating champion Adam Rippon said he “can’t imagine the pressure Simone has been feeling,” adding that it’s “easy to forget she’s still human.” Hoda Kotb tweeted that Biles “already won.” “She is a class act,” the Today host wrote. “Withdrew from team competition after vault... stayed and cheered on her teammates... got them chalk for their hands.. encouraged.. hugged them. She already won. Congrats on the silver medal!”

Despite not participating in the uneven bars competition, Biles cheered from the sidelines. In the end, Team USA won the silver medal with a score of 166.096 points, while Russia took home the gold with 169.528 points. On Instagram, Biles thanked her teammates Grace McCallum, Sunisa Lee, and Jordan Chiles for stepping up when she couldn’t. “I’m so proud of these girls right here,” she wrote. “You girls are incredibly brave & talented! I’ll forever be inspired by your determination to not give up and to fight through adversity! ... thanks for being there for me and having my back! forever love y’all.”