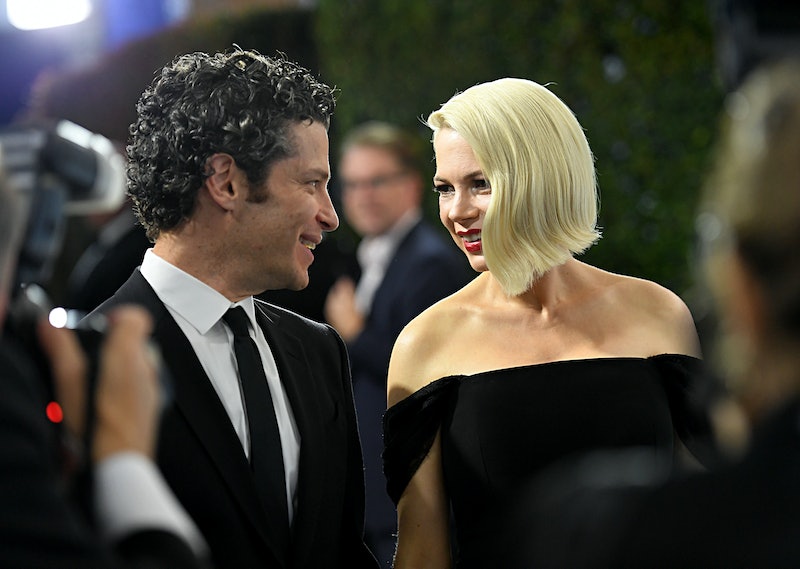 Four-time Oscar nominee Michelle Williams and Tony winner Thomas Kail's relationship timeline may be short, particularly because the couple is rather quiet about their romance, but it’s definitely sweet. Not long after the pair got engaged in December 2019, they welcomed their first child together. Fast forward to 2022 and the couple is married with three children.

Kail is famous in his own right, much like his wife Williams. As the Tony-winning director of Hamilton and In the Heights, he has a close working relationship with Lin-Manuel Miranda — which seems to have helped facilitate his meeting with Williams, since Miranda and Kail were executive producers on Fosse/Verdon, in which Williams starred. The pair haven’t explicitly said they met on the set of the miniseries, but since they weren’t previously connected, it seems more than likely that they bonded during the making of the FX show.

As awards season gears up and Williams does press to promote her latest movie The Fabelmans, fans may be curious about her husband. If Kail joins her on the red carpet as we approach Oscars season, it’s worth looking back at their relationship timeline, below.

Fosse/Verdon was very much Kail's baby, and he directed Williams in five episodes, per his IMDb page. It’s here where Williams and Kail are believed to have met.

The couple quietly went public with their relationship in December, when they were photographed together in London, where Williams was filming Venom 2. The actor was later spotted shopping for baby clothes during her downtime, as reported by People.

In a People exclusive, the couple announced that they’re engaged, and expecting their first child together (Williams also has a daughter, 17-year-old Matilda from her relationship with the late Heath Ledger). “Michelle fell in love,” a source told People. “She is happy and fulfilled and ready for another child.”

After surprising fans with the news that they’re not only dating but also engaged and expecting a baby, Williams and Kail walked their first red carpet as a couple at the Golden Globes. Upon winning Best Performance by an Actress in a Limited Series or a Motion Picture Made for Television for Fosse/Verdon, Williams addressed her fiancé and daughter. “Tommy and Matilda, I can’t wait to come home to you,” she said.

Williams gave a shoutout to her husband and daughter during her SAG Awards acceptance speech. She had won the Outstanding Performance by a Female Actor in a Television Movie or Limited Series award for Fosse/Verdon. “Tommy, like everything else in our life, I share this with you, and Matilda, it’s one thing to be completely honest as an actor,” she said. “It’s another thing to be completely honest as a human being. And that’s just who you are and how you live, and you teach me just by being you. I love you, and I’m coming home. Thank you.”

Williams and Kail were reportedly spotted out with wedding rings on that finger. It’s unclear when they tied the knot, but the wedding bands prompted many to believe that at that point they were husband and wife.

During the lockdown, Williams gave birth to Hart, her first son and her first child with Kail. “It was a reminder that life goes on,” Williams told Variety in 2022, reflecting on growing her family during the lockdown. “The world we brought a baby into is not the world we thought we were bringing a baby into, but the baby is ignorant of that. He experiences the unmitigated joy of discovery and the happiness of a loving home.” The pair didn’t confirmed their son’s name until May 2022.

May 2022: Williams Is Pregnant Again

Williams confirmed that her second child with Kail is on the way in an interview with Variety. “It’s totally joyous,” she gushed. “As the years go on, you sort of wonder what they might hold for you or not hold for you. It’s exciting to discover that something you want again and again is available one more time. That good fortune is not lost on me or my family.”

Williams, Kail, and Hart were photographed in New York City not long after their second child was born in late October. Further details about their family’s newest addition remain unclear.

This article was originally published on Jan. 19, 2020