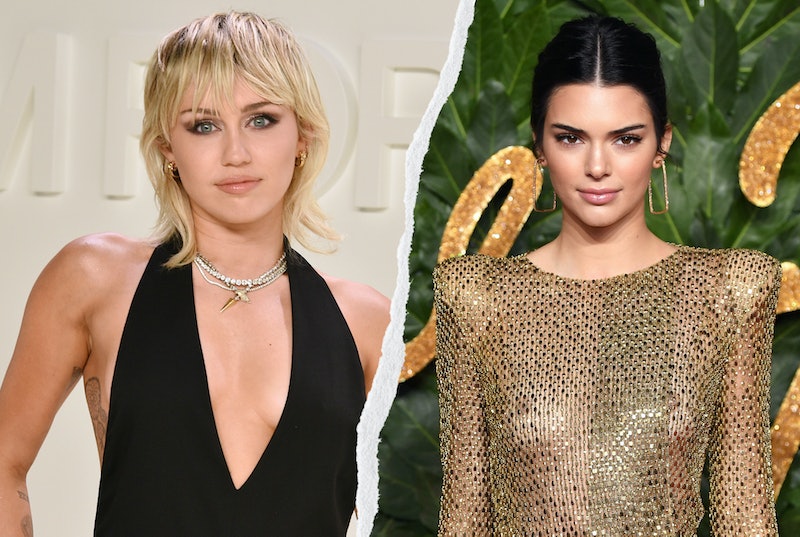 Miley Cyrus has no time for petty Instagram rumors at a time like this. Following reports that the singer unfollowed Kendall Jenner after she threw a Halloween-themed birthday party amid the coronavirus pandemic, Cyrus issued a response. According to her, she never followed the famous reality TV family in the first place. Plus, she has a bigger priority than Jenner's soirée right now: the 2020 election.

On Halloween, celebrities including Justin and Hailey Bieber, Jaden Smith, Doja Cat, and members of the Kardashian-Jenner family joined the model to celebrate her 25th birthday at a Los Angeles rooftop. According to Entertainment Tonight, over 100 people attended the bash, and each guest had to take a rapid coronavirus test before entering. Regardless, the event was met with a lot of backlash from fans who thought Jenner and her celeb friends were setting a bad example by partying while COVID-19 still looms large.

Meanwhile, Cyrus shared on Instagram that she spent Halloween reading a book in bed, which drew praise from her fans for being a responsible decision. The next day, however, the "Midnight Sky" singer's eagle-eyed followers noticed that she did not follow Jenner, her sister Kylie, and some of the celebs who attended the party on Instagram. Inevitably, this caused speculation on Twitter that she unfollowed these stars after seeing them partying recklessly on social media.

When Cyrus saw screenshots posted by an Instagram fanpage that showed she wasn't following Jenner and her guests, she commented on the post to clarify. "Never. Followed. Any. Of. Them. To. Begin. With." she wrote before encouraging her fans to move on to more important matters. "Let's stop talkin' bout who I follow on the damn gram and talk about VOTING! 1 day to go!" she said. The pop star closed out her comment with the hashtag #BidenHarris in support of the Democratic candidates.

The former Disney Channel actor has been a huge proponent of Biden and Harris throughout election season. On Oct. 20, Cyrus interviewed Harris on Instagram Live, where they discussed issues like Donald Trump's stance on the Black Lives Matter movement, her plan for criminal justice reform, and the importance of voting. And now, Cyrus has made it especially clear that she wants her followers to log off social media and get to the polls ASAP.

More like this
5 Wild Theories About Miley Cyrus’ “Flowers” Music Video
By Jake Viswanath
Kendall Jenner’s Colored Tights Prove That Cheugy Can Be Chic
By Alyssa Lapid
30 Of Kendall Jenner’s Best Runway Looks To Date
By Dominique Norman
'Knock At The Cabin' May Start Streaming Sooner Than You’d Think
By Jake Viswanath
Get Even More From Bustle — Sign Up For The Newsletter
From hair trends to relationship advice, our daily newsletter has everything you need to sound like a person who’s on TikTok, even if you aren’t.