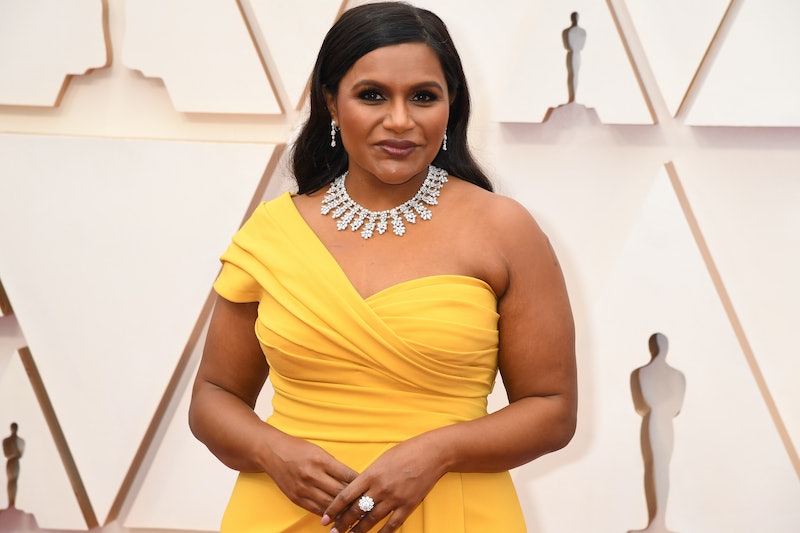 Balancing motherhood with her career as a Hollywood powerhouse can be difficult, but that doesn't mean Mindy Kaling is looking for a partner to help her out. In her new book of essays, Nothing Like I Imagined (Except For Sometimes), Mindy Kaling revealed her "complicated" feelings about dating as a single mother, explaining that there are just as many pros to parenting on her own as there are cons. Kaling welcomed daughter Katherine Swati Kaling, who she calls "Kit," in December 2017, and has raised her baby girl by herself in the nearly three years since.

In her book, as reported by E! News, Kaling explained that most of the time, she doesn't think about her relationship status until it's pointed out to her, like when other mothers complain about their partners to her, "feigning desire to be single in an attempt to make the single mom feel better about being husband-less." But while there are times when she wishes she had a husband to help her raise Kit — namely, instances like "When I'm Alone at a Party, When I Need to Reach Things, When Kids' Books Mention Daddies, When I Want Dessert at a Restaurant, When My Kid Does Something Amazing and When I Think About Diamond Rings" — the idea of dating is "complicated" for Kaling.

"Sometimes it's the most liberating and lucky feeling in the world," she wrote of her single status. "Sometimes I am just so grateful to be an independent woman doing what I want, when I want, that I could cry with gratitude." Plus, being a single mother means she has full control over all of her parenting decisions. "I save a truly staggering amount of time not having to run my parenting decisions by another person," Kaling explained. "Good or bad, I can just, like, quickly make a decision and move on with my day."

Even without a romantic partner, Kaling has found people to help support her and Kit — specifically, her baby nurse Rose, who she hired shortly after giving birth. Though she originally wanted to raise Kit on her own, Kaling ultimately realized that without her late mother around to advise her, she needed someone to help guide her through the first months of motherhood. "I didn't have my mom. But I did have Rose," she wrote, describing hiring the baby nurse as the best decision she could have made.

"Rose loved giving advice, and I loved listening to it," she continued. "All these fears were the worst I've ever had in my life, and Rose helped me keep them at bay. She was my mom when I needed a mom, and that wasn't even her job." In fact, Kaling grew so attached to her baby nurse that she joked she would even consider having another baby, just to have Rose around again. "I told her I don't know if I'll have another baby, but if it meant she would come and live with me, I may just go ahead and do it," the Mindy Project creator revealed.

In addition to building up her own support system without a romantic partner, Kaling has also been able to find ways to balance her career and motherhood over the past few years. "I’m really lucky because I get to create my own job opportunities," she told People in 2018, explaining that she's glad she had Kit after establishing herself in Hollywood. "Because I do that, I can fit my daughter into my job. It’s a luxury most American women don’t have."

"It’s one of the nice things of having had my baby a little bit later in my career," Kaling continued. "I can be like, ‘Hey, I want a little area that I can have my daughter play because I want to check up on her at work.’ That is probably the biggest perk of my life: to involve my daughter so much in my career."

More like this
Justin & Hailey Bieber’s Relationship Is “Unbreakable” After Their Two Health Scares
By Bustle Editors
Rhys Ifans Has A Good Reason For Keeping His Love Life On The DL
By Maxine Harrison
Don't Worry, Darling, Chris Pine Appears To Be Single Right Now
By Casey Cipriani and Jake Viswanath
Sydney Sweeney Is Engaged To Her Low-Key Businessman Beau
By Jack Irvin and Jake Viswanath
Get Even More From Bustle — Sign Up For The Newsletter