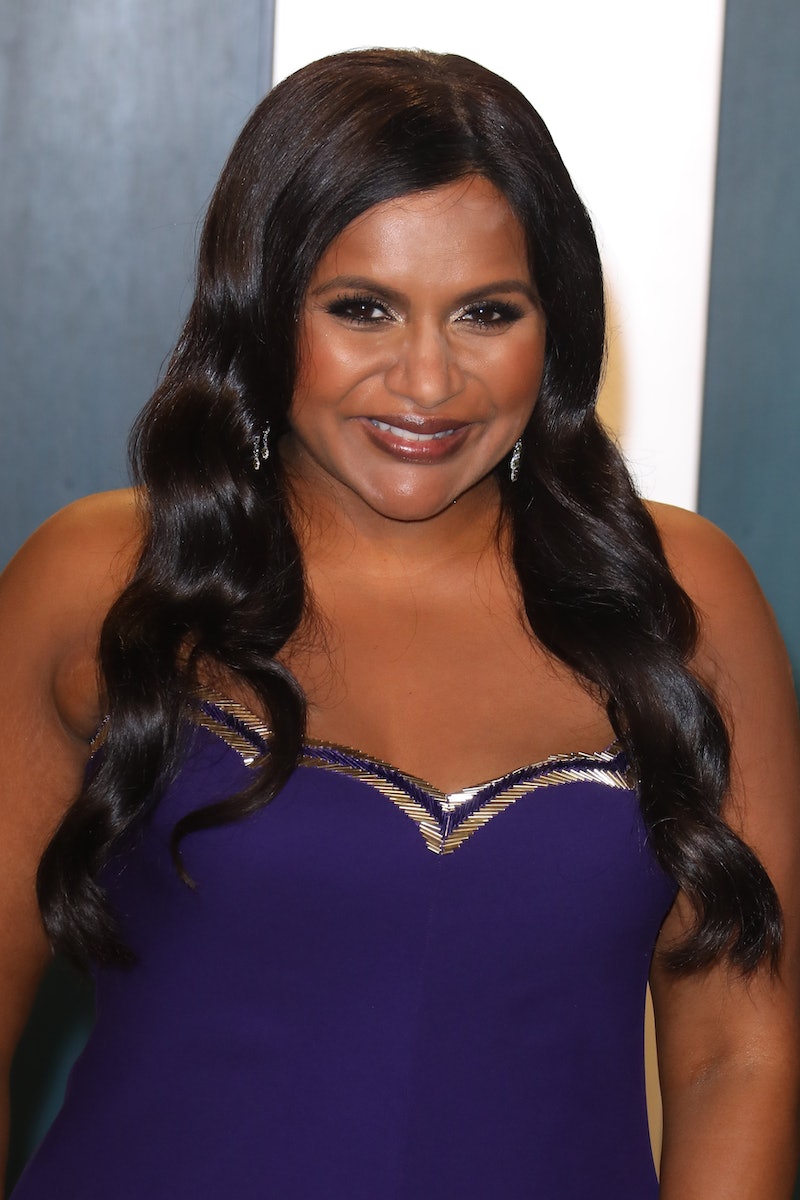 Because it's Christmas, and at Christmas you tell the truth, Mindy Kaling's Love Actually-inspired holiday 2020 message was pure perfection. The Mindy Project star added to the 2003 movie scene's ever-growing canon of parodies by dropping a series of cards with her own missive in a Dec. 24 Instagram video. Playing off the rom-com's official version, she wrote the words everyone needs at the tail end of this very turbulent year.

"This year has been hard," Kaling said via her cards. "With any luck by next year we'll all be allowed out of our homes. But until then, know to me you're all still perfect... and you look great in sweatpants. Merry Christmas and happy holidays!"

Her message warmed the hearts of fans and famous friends alike. Fellow actors Sharon Stone, Olivia Munn, and Nathalie Emmanuel were among those who responded in the comments to let her know the message hit home. Stone stuck to a series of emoji (mostly applause), but Munn wrote, "Love youuuuuu," and Emmanuel added, "You are so sweet." Another commenter summed it up well, writing, “This is what America needed.” Yet another Kaling follower spoke for essentially everyone by claiming, “I think she’s talking to me.”

In other social media posts, the actor also seemed to have been making the best of the unique holiday season for her children, 3-year-old daughter Katherine Swati ("Kit") and 3-month-old son Spencer. She jokingly captioned a Dec. 20 meme about her daughter's repeat movie-watching habits "How the Grinch stole my sanity," and shortly afterward posted another about her waning interest in gift wrapping. "It's been a tough year," she said in a Dec. 25 Christmas message. "You did a great job getting through it, so, hey, parents, if you want to eat Santa's cookies, I'm not going to tell anyone."

During a virtual Dec. 18 "#ToryTalks" interview with Tory Burch, Kaling also shared her new holiday traditions with her children. "What's fun about when you have your own kids is you can kind of make stuff up and then just decide that you’re going to do that every single year," the actor said, explaining that she wasn't able to take her son and daughter to see Santa Claus at a local outdoor mall. Instead, she said B.J. Novak, her ex and longtime friend, who's also the children's godfather, would be donning the big red suit for them.

"We're going to be baking cookies and then all of a sudden we're going to hear bells from another room and I'm going to go, 'Kit, what do you think that is?'" she told Burch, adding that they'd then find a costumed Novak "asleep on the sofa" with a bag of toys. "It's so complicated why Santa was there, why he's taking a nap, but we're gonna do that," she added.

Although footage from that festive scheme didn't make it to social media, Kaling luckily had plenty other holiday content to help make the 2020 version more tolerable.

More like this
Everything To Know About Taylor Swift’s 10th Studio Album, 'Midnights'
By Grace Wehniainen and Jake Viswanath
Rachel Zegler Reveals She Had Breast Cancer Scare
By Radhika Menon
The 'Reasonable Doubt' Cast Includes A 'Save The Last Dance' Reunion
By Grace Wehniainen
Twitter Is Freaking Out Over Rihanna’s 2023 Super Bowl Halftime Show Announcement
By Stephanie Topacio Long
Get Even More From Bustle — Sign Up For The Newsletter