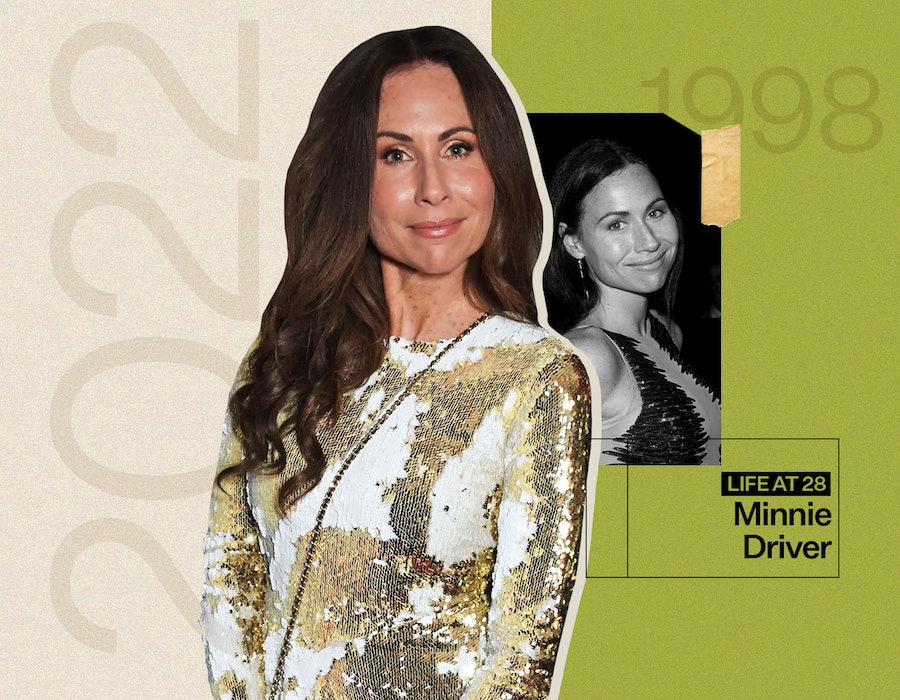 Less than two weeks after turning 28, Minnie Driver was nominated for her first Oscar, for her role in Good Will Hunting as the self-possessed girlfriend of the titular character (Matt Damon). To celebrate, she joined both her sister and best friend, Alexandra, for a quiet glass of champagne at the Chateau Marmont. The lounge was nearly empty at the famed Hollywood hotel, and a waiter asked her, “What are you doing tonight? Where are you going to have your party?” She had no plans, so the waiter insisted she celebrate, telling the British actor to “just use the house phone and call your friends!”

So she did. “We called up a bunch of people, and I had this unbelievable impromptu party at the Chateau,” Driver tells Bustle. “Sixty people came, and [they] brought their dogs and babies.”

At the time, she was living in Los Angeles’ Beachwood Canyon neighborhood with Alexandra and their dogs. The friends shared a cantilever duplex overlooking Hollywood, which she describes as “a revolving door where people would come and stay and live for a couple of months.” It was a time of dark denim, low-rise jeans, Helmut Lang bias-cut slip dresses, and strappy tops by Cynthia Rowley and Veronica Beard. “I always had something in my hair, like butterflies and bows and sh*t like that,” says Driver, who’s now 52. “But I knew that the dark brown lip liner was a bad idea.”

In her new memoir, Managing Expectations, Driver collects similar anecdotes from her life in spare but insightful prose. For her, age 28 was the year she navigated “the nexus of heartbreak and a really agreed-upon success,” says the actor, who recently led ABC’s critically loved sitcom Speechless. Sure, she had reached her industry’s highest echelon of talent, but she felt her personal life was “falling apart.” Earlier that month, Damon, whom she’d been dating, announced he was single on The Oprah Winfrey Show.

In hindsight, she wishes she had enjoyed the time a bit more, “even the coming apart,” she says, “because it’s good when things come apart when you're younger, because then you get to put them back together with intention.”

Below, she talks to Bustle about fame, the role that got away, and dating coworkers.

At an event for Amazon’s 2021 Cinderella, in which she played Queen Beatrice.Karwai Tang/WireImage/Getty Images
Damon, Driver, and Ben Affleck at Good Will Hunting’s premiere.Frank Trapper/Corbis Entertainment/Getty Images
1 / 2

What did a typical Friday night look like for you in 1998?

We’d have people over and play music really loudly, and invariably our neighbors would complain and then join the party. If we went out, we’d go somewhere like El Coyote and have Mexican food and margaritas and dance on the tables. That was always a pretty safe bet, because we never got photographed doing any of that. I don’t know why. Or we’d go to the Chateau Marmont, which was beautifully seedy back then. We would basically use their lounge as our own living room.

How did your daily life change when Good Will Hunting came out?

It was an amazing thing, to be successful with something you love, something I knew and still know to be good, that movie. But having photographers outside your house 24 hours a day, and not being able to do anything without being put through the meat grinder of someone else’s idea of who you are is incredibly disempowering. You feel like there are so many versions of yourself being put out into the world, the truth of who you are can often slip away. If you’ve got a huge newspaper saying that you’re this, how do you know that’s not true? It’s an existentially weird experience. Particularly then, in 1998, there was no recourse; there was no social media; there was no way to answer anything that was written about you.

It sounds incredibly destabilizing. There’s a great line in your book about being metabolized by strangers.

In your book, you allude to being relieved to not win the Oscar. Why was that?

I wasn’t so much relieved not to win, it was the notion of “now that I didn’t win, I can get back to being an actor.” The total disingenuous nature of my business is that nobody really gives a sh*t. Like, they’ll give a sh*t for that moment, and then it’s onto somebody else. There’s some fresh-faced person who believes they want that attention, and the baton will be passed. On Twitter, I’ve seen the word “relevant” thrown as an assault, [like] “You’re irrelevant!” Like the zenith of human accomplishment is to be and remain relevant. I was happy to ride a different wave for a minute.

How did you apply what you learned from Good Will Hunting to your next projects?

I turned down a lot of commercial stuff, which in retrospect I wish I’d taken, like I turned down The Wedding Planner — which was fabulous — in favor of Ideal Husband and The Governess. And I kind of wish I’d done [The Wedding Planner] because it was such a great movie and fun. I wanted to go and flex as an actor, and I was a little bit headstrong. But I still love those movies that I made.

I don’t want to focus too much on your relationship with Matt Damon, but what did you learn from the experience of dating someone you were working with?

Oh, it’s a terrible idea. Everybody has an office romance, and it never ends well, and then you have to literally see them every day. My dad did try to warn me, but the thing is, you fall in love. And I was so naive. Matt was so wonderful and funny and lovely and talented. I understand why it happened, and I wouldn’t change it because it was beautiful. But I didn’t quite learn my lesson. I dated a few more [actors] and then was like, “OK, I’m done.”

At what age did you realize you wanted to keep it about the work and not chase fame?

Watching my mother die [in March 2021] and having last conversations with her, you really f*cking realize that it boils down to love and to the stories of your life. Around [age] 31, so 2001, I stopped acting for a while when I started doing music. I was just like, “F*ck this. I need to do something that I love.” Then I came back and did Phantom of the Opera.

I was obsessed with Joel Schumacher’s Phantom of the Opera adaptation when I was a kid. It’s so good.

It’s beautiful, and the making of it was as fun as the movie the world saw.

Do you have a favorite memory from the set?

Joel made me laugh so hard every day. He used to read The New York Times when [stage crew] was setting up the lights. Another person in the movie was complaining about how over-the-top I was. Joel didn’t even look up from his paper. He just said, “Oh, honey, no one ever paid to see under-the-top.”

He was so funny and great. We had the happiest set in the studio where we were shooting. They were shooting Eyes Wide Shut and Alexander at the same time, and we would get these strange missives under the door of the studio from Eyes Wide Shut, saying, “Nobody come anywhere near our set! Don’t even look. Don’t even come here.” We would always put signs under their door saying, “Please come visit us!”

It’s OK for it to look like it’s on fire for a minute. It is going to change. There is no stasis. Remember that, and take a breath.

More like this
Watch The Emotional Trailer For Dolly Alderton’s 'Everything I Know About Love'
By Bustle UK
Becky G Once Had A Fear Of Speaking Spanish. Now She's Topping The Latin Charts.
By Tess Garcia
10 Must-Read New Books Out This Week
By K.W. Colyard
30 Books To Read This AAPI Heritage Month
By K.W. Colyard
Get Even More From Bustle — Sign Up For The Newsletter