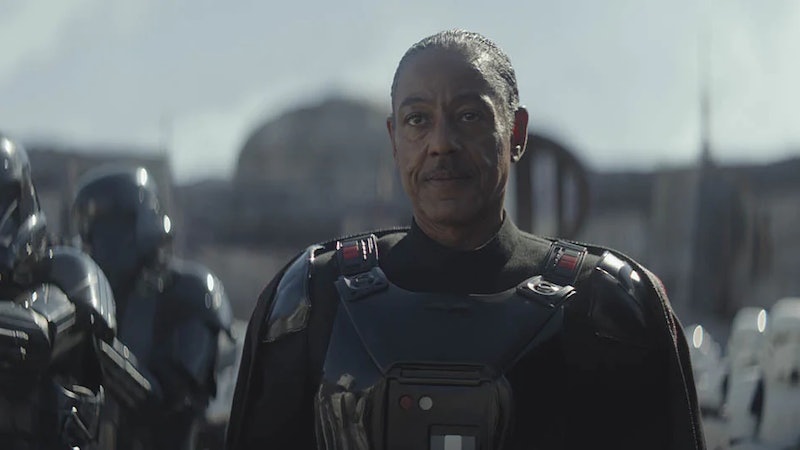 The Mandalorian largely centers around Mando and Baby Yoda's weekly adventures, but it's also been steadily teasing the villainous Moff Gideon's plan. It's still not clear exactly what his end goal is, but Season 2 has snapped it more sharply into focus.

Fans first met Gideon in Season 1, when he was revealed to be the mastermind behind Baby Yoda's abduction. It was also revealed that Gideon's scientist, Dr. Pershing, was conducting some experiments on The Child, and those experiments were unfinished. In Episode 4 of Season 2, we finally learned more about these experiments. Pershing was drawing blood from Baby Yoda and apparently injecting it into test subjects. They weren't having much success, as the subjects' bodies were rejecting the blood and dying. Pershing also mentioned that Baby Yoda's blood had a high "M count," and the episode closes with Imperial talk of a "new era" and Gideon eyeing a lab full of ominous black Stormtrooper suits. So what does this all mean?

What sounds most likely is that Gideon is building a Force-powered Imperial army of clone troopers that will usher in this "new era" for the Empire. Dr. Pershing's reference to an "M count" likely refers to midi-chlorians, the microscopic life-forms present in Jedi blood that power the Force. Midi-chlorians were introduced in the Star Wars prequel films and were one of the most ridiculed aspects of the movies, so it's somewhat surprising to see The Mandalorian resurrecting them. However, the show may have a good reason for doing so.

Another bit of Star Wars lore the prequels developed was the use of clones, and it seems like Moff Gideon is building a new generation of clone troopers. The facility that Mando and company blew up in Episode 4 had tanks with still-developing bodies in it, which sure made it look like Gideon is trying to develop Force-powered clones with Baby Yoda's blood. But he may have another goal entirely.

As everyone knows, you can't have an Empire without an Emperor. Emperor Palpatine died in Return of the Jedi, but he was living it up as a clone in The Rise of Skywalker. So who cloned him? That could be where Gideon comes in. If he's able to create Force-powered clones, Gideon could potentially create a body powerful enough to house the resurrected Emperor. The clone Emperor would then, in Gideon's mind, return the Empire to its former glory and usher in this "new era."

Since The Mandalorian takes place prior to the events of the Star Wars sequel trilogy, we know that this new era never takes shape. Instead, the First Order fills the power vacuum left by the Empire while the Emperor hangs out in the darkest corners of space. But that doesn't mean Moff Gideon isn't still going to try as hard as he can to implement his plan — whether it's cloning Palpatine or creating a Force army. And that means that Baby Yoda is in serious danger.