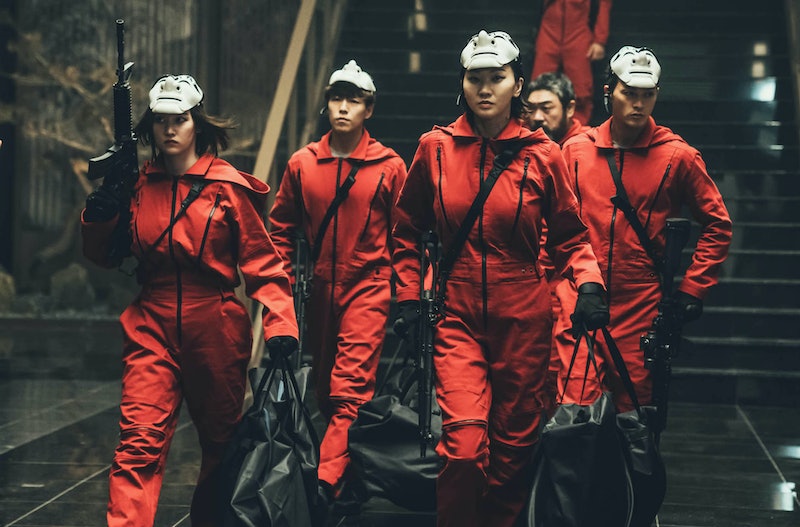 The Professor and his savvy team of strategists are back in Money Heist: Korea - Joint Economic Area. The first half of Season 1 debuted in June and closely followed Money Heist, Netflix’s first Spanish-language original show that proved to be wildly popular. The second half of the season — alternatively dubbed Season 2 by viewers — will debut on Dec. 9.

Set in the near future, the remake takes place when North and South Korea are set to unify. The Professor (Yoo Jin-tae) purposefully plans an epic heist after unification is announced but before it’s become widely accepted by the public. He brings together a crew to steal four trillion Korean won from the newly integrated bank — all while crisis negotiator Woo-jin (Kim Yun-jin) tries to convince them to release their hostages, having no idea the Professor is actually her boyfriend, Sun-ho.

Part 2 picks up as public sentiment continues to turn against the negotiators and the Korean government. Meanwhile, the Professor comes face-to-face with Captain Moo-hyuk (Kim Sung-oh), a former special agent from North Korea who had early suspicions about his true identity.

Netflix has not yet announced if there will be a Money Heist Part 3. But it stands to reason that future seasons are possible. While Korean dramas don’t typically go beyond one season, Netflix has been experimenting with formats and sequels, like with Squid Game Season 2. The original Money Heist also ran for five parts (or seasons) and was a top-performing non-English language series, according to a 2019 Netflix investors call.

There’s also the fact that Netflix seems keen to increase its international viewers, and the original Money Heist wrapped up in 2021. As Money Heist: Korea writer Ryu Yong-jae explained to The Korea Times, the remake is a good way of bringing Asian viewers into the platform because the original Money Heist wasn’t as widely watched in Korea as it was in the U.S. “I thought it would be nice if this series could lead people who knew about the famous original series yet have not seen it, and K-drama and K-pop fans, to look up the original after watching our series," Ryu said. "I'm thrilled that our series ranked No. 1 (on the chart) globally. But I feel more satisfied that more audiences in Asian countries have enjoyed the series and this led us to help expand and introduce the cinematic universe of the Money Heist franchise."

Here’s everything else to know about a potential Part 3.

What Is The Money Heist: Korea Part 3 Potential Premiere Date?

It’s hard to know an exact date on when a third part may premiere, as having multiple seasons for Korean shows is still relatively new for Netflix. The original Money Heist also had an unpredictable release schedule; it had three seasons, each split into two parts. The wait in between each part varied from just three to eight months, but the time in between seasons was usually a year and a half. So if Money Heist: Korea is anything like Money Heist, Part 3 may not debut until 2025 — though fingers crossed it comes much sooner.

Who Is In The Money Heist: Korea Part 3 Cast?

Anyone who has seen the original Money Heist knows that not all of the Professor’s team makes it to the end of the series. Undoubtedly there will be many twists in store for Money Heist: Korea, but for now, we can likely expect most of the cast to return if there’s a third season. This includes the Professor (Yoo Ji-tae) and criminal team members like Berlin (Park Hae-soo), Tokyo (Jeon Jong-seo), Rio (Lee Hyun-woo), Denver (Kim Ji-hoon), and Helsinki (Kim Ji-hun). Woo-jin (Kim Yun-jin) will also likely return as her romance with the Professor continues to get teased out.

What Is The Money Heist: Korea Part 3 Plot?

If Money Heist: Korea ends up being a close remake of the original, that means we’ll eventually watch the heist team deal with the fallout from their first job and then prepare for a second, and even bigger, heist.

“The process of making a remake involves keeping the characteristics of the original, retelling the story of the previous production, but using a different cast and setting,” director Kim Hong-sun explained to The Korea Herald. “If these elements are not involved, then the series cannot call itself a remake. If the gang does not enter the mint, rob the mint and complete its mission, then that’s not Money Heist.”