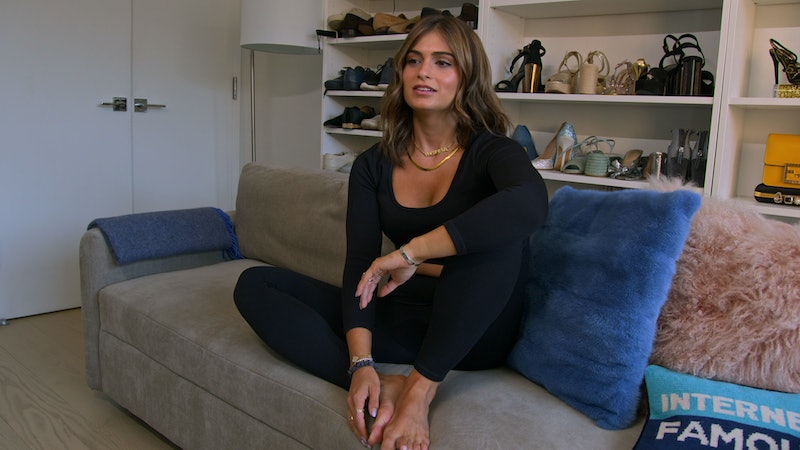 Netflix’s reality series My Unorthodox Life follows fashion mogul Julia Haart’s journey after leaving behind her ultra-Orthodox Jewish community to strike out on her own. When she left, so did three of her four children — including her eldest daughter, 27-year-old Batsheva Weinstein. While her mother has totally rejected the strict religious principles she was brought up with, Batsheva has found a way to integrate her faith into a more modern life. She appreciates parts of her religion but also wants to do things like show her hair, wear pants, and be a career woman — all of which weren’t allowed in their community.

Get to know more about Batsheva below.

When not helping out at her mom’s modeling agency Elite World Group, Batsheva works as a blogger and studies marketing at the Fashion Institute of Technology. According to her LinkedIn page, Batsheva also does freelance social media work for the luxury lingerie brand La Perla, where her mother served as creative director from 2016 to 2019.

In her spare time, Batsheva runs Sunnies and Sangria, a lifestyle blog filled with gift guides, travel tips, and all things fashion. She’s taken her style and social media expertise and combined them into a pretty successful social media presence, with millions of followers on her TikTok and Instagram accounts.

The content creator entertains her 1.3 million TikTok fans with a variety of videos. Many are about beauty and travel hacks, and she also loves sharing her passion for clothes with get-dressed-with-me videos.

Fashion is one of the biggest ways Batsheva challenges her Orthodox Jewish upbringing. While living in the community, she was expected not to wear pants or any revealing clothing and to cover her hair with a wig. Since leaving, she’s been eager to experiment with her style.

On Instagram, you can see how much Batsheva’s style has evolved: she now wears pants, leggings, crop tops, shorts, bikinis, and more. Her feed includes reposts of her TikToks, selfies, and plenty of photos of her with her husband Ben.

Ben works in real estate, though he discussed switching careers on the show. He’s a much more private person than his wife, with just six posts on an Instagram account that he only set up a couple of months ago.

He and Batsheva got married when they were 19 and still living in their Orthodox Jewish community. Days after their wedding, Julia left the religion, prompting her children to rethink the role of Orthodox Judaism in their own lives. While Batsheva’s sister Miriam embraced a new, modern lifestyle fully, Batsheva struggled more with the decision to leave the community.

She says on My Unorthodox Life that she didn’t speak to her mom for a while, and it was Ben who kept those lines of communication open. Eventually, she came around and followed after her mom. “I’ve found my own way in the religion,” she says on the show, adding that she still keeps up many of the religious traditions.

Ben has also had a hard time adjusting to Batsheva’s changing beliefs. Although he expressed multiple times on the show that he’s willing to keep an open mind, he expressed being uncomfortable with his wife wearing pants and delaying having children. But he was willing to let Batsheva make her own decisions, and the two are still happily married.

“I’m usually better at articulating my thoughts in text than I am in person ... but at this moment I don’t have words to express my love and appreciation for you @batshevahaart,” Ben wrote in a recent Instagram post. “Everyday [sic] you inspire me and make me proud to be your husband. I’m grateful for your unwavering support and companionship. You make me happier beyond my wildest dream and I’m very excited for what the future holds. Here we go!”