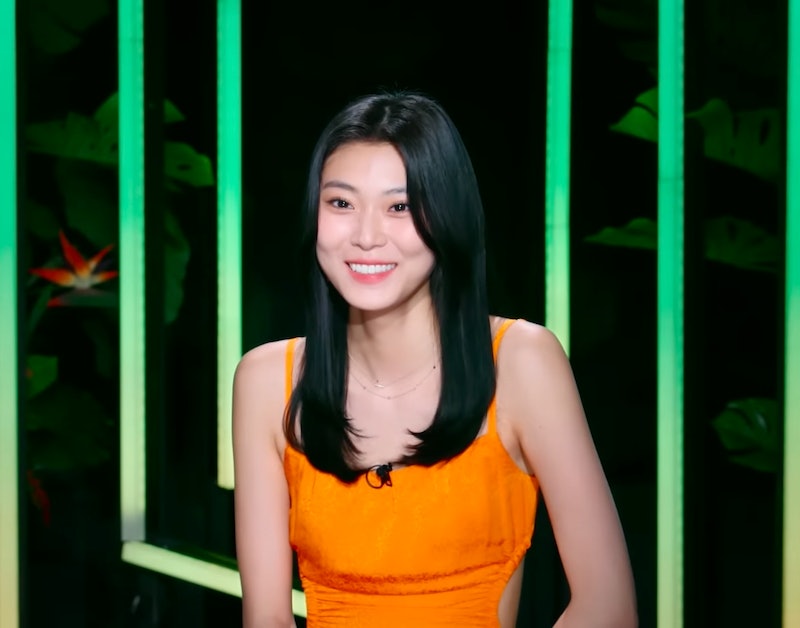 On Netflix’s Korean reality series, Single’s Inferno, a group of hot, young people are stranded on the aptly titled “Hell Island,” and the only way to escape is by coupling up with someone each night. Those successful duos then move to the luxurious “Heaven Island” for the night, where they enjoy all the pleasures the name would suggest. Following the popular inaugural outing, the streamer promised that there’d be plenty more “joy, tears, fear of rejection” and “a healthy amount of spiciness” in Season 2, thanks to a new group of singles that includes 22-year-old Nadine Lee.

Based on her intro in the reality dating competition, Nadine was born in New York City, and she described her personality as “cold and honest,” switching between English to Korean. “I think I sound different when I speak English versus Korean,” she said. “With English, I’ve heard that I’m a little bit more stern and straightforward and professional. When I speak Korean, I’ve heard that I’m a bit cuter and soft.”

She joined the Single’s Inferno cast to “make some new special memories” and step outside her comfort zone, but she also “[wants] to date.” What is she looking for? “I’m on the taller side, so my ideal guy would be tall,” added Nadine — who is 5’10” and doesn’t “really mind long-distance” relationships if she’s really interested in that person. “Also, they should drive better than I do. Since I’m a good driver myself.”

As you stream Singles Inferno Season 2, here’s everything else to know about Nadine.

After growing up between Englewood, New Jersey, Seoul, Korea, and Marin County, California, Nadine graduated in 2018 from Branson School in Ross, California. After her college acceptance reaction video went viral, she enrolled at Harvard University, where she studies neuroscience with a secondary concentration in computer science. She expects to graduate in 2023, per her LinkedIn.

When she was a freshman in October 2018, The New York Times interviewed Nadine for an article about a lawsuit challenging the university’s use of affirmative action in admissions. She told the paper that she assumed she would face discrimination applying to college and had to consider how to stand out from other Asian American candidates. She ultimately applied to the United States Air Force Reserve Officers Training Corps, emphasizing her enthusiasm for the military and her ambition to be a trauma surgeon.

A certified advanced life support emergency medical technician, Nadine also serves as a Harvard Medical School RA and project manager who tracks donor investments in adolescent health. She also credits herself as the executive director of the Peer Buddy Committee at Synapse National, which she describes as a nonprofit organization that “provides a powerful social support network for individuals with brain [injuries] through the facilitation of peer support groups and a one-on-one volunteer buddy program.”

In Single’s Inferno, Nadine describes her love of the outdoors, revealing that she played soccer and lacrosse in high school and college. Her active lifestyle is certainly evident on Nadine’s Instagram page, which shows her enjoying such activities as sailing, skiing, golfing, and kayaking over the years. She also frequently honors her close relationship with her mother, including Mother’s Day breakfast and flowers to a tribute she shared to “show off how beautiful” her mom is. In one post, for example, she called the matriarch “strong, hard-working, and invincible.”