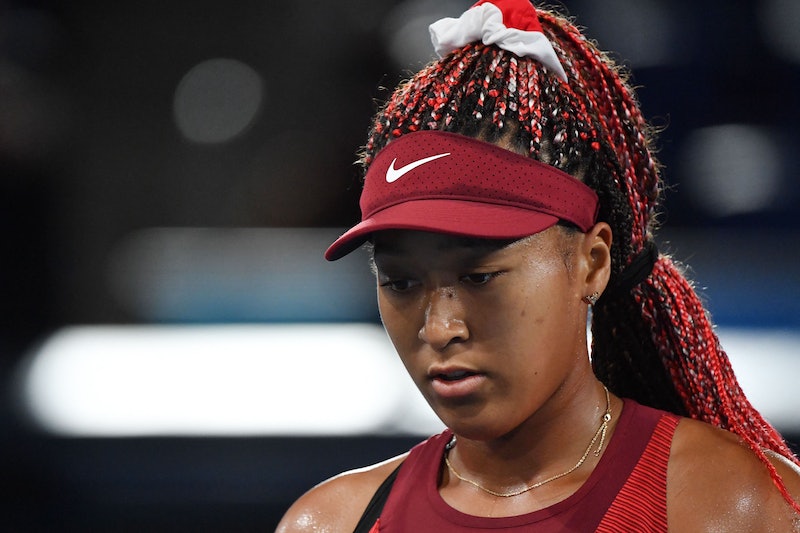 The pressure of playing in the Tokyo Games is too much for some of the world’s best athletes, including Naomi Osaka. On Tuesday, July 27, the 23-year-old tennis star lost to the Czech Republic’s Marketa Vondrousova in the third round of the competition, marking the end of her 2020 Olympic journey. Vondrousova beat the No. 2 ranked player in the world in straight sets, 6-1 and 6-4, just four days after Osaka lit up the cauldron at the Opening Ceremony.

Following her defeat, Osaka reportedly gave a brief statement to the press about cracking under the pressure. “I feel like I should be used to it by now,” she said. “But at the same time, the scale of everything has been a bit hard because of the break that I took.” In late May, the tennis champion bowed out of the French Open after she was fined $15,000 for refusing to do post-match interviews to protect her mental health.

“I am glad I didn’t lose in the first round, at least,” Osaka continued. “I am really glad to be here. I am sad I lost, of course, but all in all, I am really happy with my first Olympic experience.” Vondrousova sympathized with Osaka and told reporters that it was even more difficult for the tennis star because she was representing Team Japan. “It’s tough for her also playing in Japan and in the Olympics,” the athlete said, according to The Associated Press. “It’s so much pressure, I cannot imagine.”

Osaka has not yet addressed her loss on social media. However, on Sunday, July 25, she told reporters in a courtside interview that she was feeling “refreshed” and “happy again” after winning her first match against Zheng Saisai of China 6-1, 6-4. Per The Washington Post, Osaka was also feeling better about being the press again. “Honestly, I don’t feel that weird about it,” she said, adding that she was “happy” to answer questions after taking time to prioritize her mental health. “More than anything, I was just focused on playing tennis.”

After her victory, Osaka took to Instagram to share a photo of herself smiling on the tennis court. “I’m here for a good time,” she wrote. In the comments, fans were thrilled to see her doing so well, especially after the emotional statement she released in May when she withdrew from the French Open. “I think now the best thing for the tournament, the other players and my well-being is that I withdraw so that everyone can get back to focusing on the tennis going on in Paris,” she wrote, explaining that she “suffered long bouts of depression since the US Open in 2018.”

After taking some time for herself, Osaka made it clear that she was thrilled to be representing Japan at the Olympic Games. After the Opening Ceremony, the tennis star shared a photo on Instagram of her holding a torch in front of the Olympic cauldron. “Undoubtedly the greatest athletic achievement and honor I will ever have in my life,” she captioned the post. “I have no words to describe the feelings I have right now but I do know I am currently filled with gratefulness and thankfulness. Love you guys thank you.”