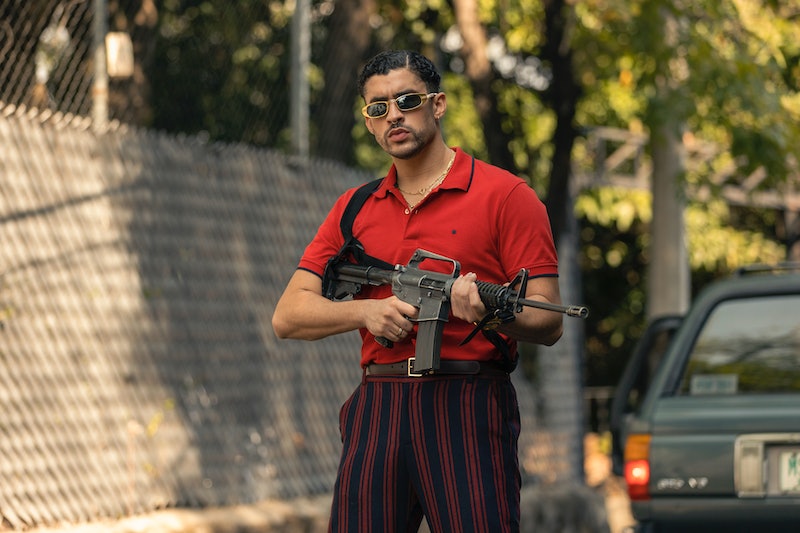 A new generation of Mexican hitmen take center stage in Narcos: Mexico Season 3. But unlike their predecessors — many of whom became involved with drug trafficking as a way to escape poverty — these younger “Narco Juniors” come from a life of privilege. Among them is Arturo "Kitty" Paez, a new character played by Bad Bunny who basks in the thrill and status of being a cartel member.

Like most of the characters and events in Narcos: Mexico, the Narcos Juniors are based on a real group that rose to prominence in the 1990s, following Miguel Ángel Félix Gallardo’s 1989 arrest. They served under Ramón Arellano Félix, the alleged enforcer of the Tijuana Cartel which his brother Benjamín took over after the collapse of Félix Gallardo’s Guadalajara Cartel. “The Arellano Félixes became famed for the juniors they had at their side like a protective shield,” journalist Jesus Blancornelas wrote in a weekly Tijuana column, per a 1996 The Los Angeles Times article. “These youths, because of the position of wealth and power that brought them together with the Arellanos, became untouchable for whatever murders they wished to commit.”

Members of upper class neighborhoods began to notice the Tijuana Cartel “tighten[ing] their tentacles around boys from prominent families who are accustomed to lives of opulence” once the Arellano Félix family moved into the affluent Tijuana area in the 1990s, Father Salvador Cisneros told The Los Angeles Times. He explained that Ramón saw the rich 20-somethings as vital strategic allies, as their wealth often meant they had U.S. citizenship and residences on both sides of the border.

“The juniors can enter the United States and blend into its society with tremendous facility. It makes them very useful,” Cisneros said. “Anyone who can drive easily into the United States can earn $15,000 in just a few hours. That is a tremendous temptation for someone of their age. They are easily converted into tools of the narcotics trade.”

Six of these Narco Juniors were arrested and named in a U.S. District Court in San Diego in 1996. Among them was Agustin Hodoyan, the son of a prominent Tijuana business family who went by the alias “El Lobo.” Per The Los Angeles Times, Hodoyan said that Ramón made himself known to all the youth in the neighborhood. “Every Friday and Saturday night, he would be at the disco or a party. He always paid for everyone’s drinks. He was a partier. He used to drive around with his music turned up real loud,” Hodoyan said. Per The Guardian, Ramón drove a red Porsche and wore a mink jacket and heavy gold jewelry. Such a gaudy display of wealth undoubtedly made him a magnet for bored rich kids.

Ramón died on Feb. 10, 2002. He and a car full of Narco Juniors were on their way to kill a rival gang leader when he drove the wrong way down a one-way street into a police patrol car. When the cops spotted their guns, a shoot-out ensued, and Ramón and several of the juniors were killed.

While the power of the Tijuana Cartel declined after Ramón’s death and Benjamín’s arrest in 2002, their tactic of recruiting young men has had devastating and lasting effects on Mexico’s war on drugs. In 2009, Reuters reported that there were an increasing number of middle to upper-class teens being recruited into cartel life, often lured in by the parties and promise of a hard reputation. “There are lots of us and we get $300 for each kill,” one Narco Junior told Reuters. “It was easy money.”

Criminal lawyer Guillermo Lopez told Reuters that cartels began using kids because even if they commit murder, the maximum amount of time they can serve is five years in Mexico’s courts. “These kids are cheap labor who cannot be imprisoned,” he said. “More and more of them being used by the drug gangs.”