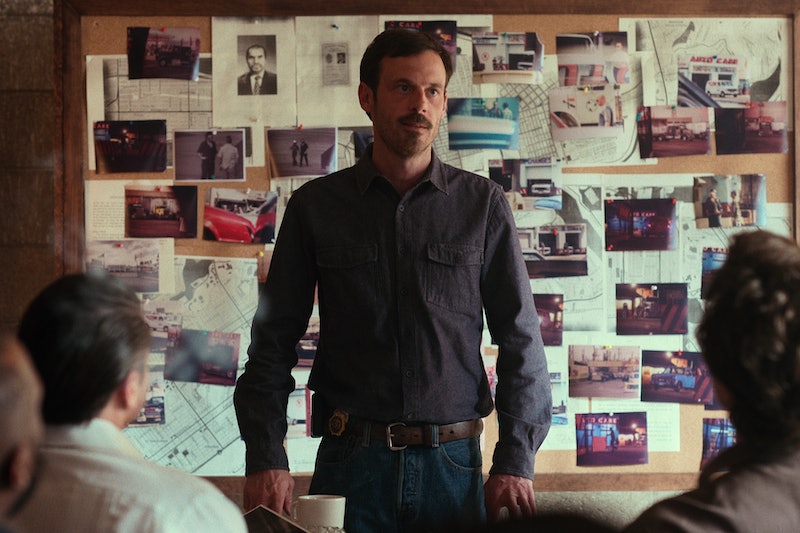 DEA agent Walt Breslin (Scoot McNairy) and drug kingpin Félix Gallardo (Diego Luna) may have started Narcos: Mexico’s second season with two very different goals, but they both end up in relatively the same place: having failed to meet them.

“Neither one of them got the thing that they wanted, and they both went into this thing very naively,” showrunner Eric Newman told Collider in February 2020. “Walt thinks, 'I'm going to go down [to Mexico] and get justice [for DEA agent Kiki Camarena’s murder]. It's that simple. We're gonna go down there, we're gonna kick ass, and we're gonna win.' And Félix Gallardo believed he was going to control this partnership he had with the government, and that he wasn't disposable, he was a guy who had made himself so important in the economy of Mexico that he was above the law. Both guys find out that they're wrong.”

Season 3 of the Netflix series, premiering on Nov. 5, will pick up in the aftermath of Felix’s arrest as new kingpins rise up to seize control over the drug game in Mexico. Before you dive in, though, you may want a bit of refresher on all the scheming and betrayal that led up to this point. Here’s what you need to remember.

The Rise & Fall of Felix Gallardo

The season begins with Felix celebrating his 40th birthday with the heads of his plazas. While at the party, Felix approaches Cali Cartel member Pacho Herrera (Alberto Ammann) and requests that he pay back his debts. Herrera declines, citing increased pressure on him from the Americans after Kiki Camarena’s (Michael Peña) murder.

Felix then goes to meet with Juan Nepomuceno Guerra (Jesus Ochoa) of the Gulf Cartel, hoping to form a monopoly on the importation of cocaine into America and muscle the Columbian cartels out of the trade. He also causes tension between the Sinaloa and Tijuana plazas after imposing a tax on Sinaloans transporting product through Tijuana.

Elsewhere, a plane owned by CIA-backed arms smuggler Juan Matta-Ballesteros (Vladimir Cruz) is shot down. He’s later given up by the Mexican government in compliance with the United States’ effort to put an end to the drug trade. Seeing an opportunity, Felix takes over Ballesteros’ routes for the CIA.

Felix then goes with Amado Carrillo Fuentes (José María Yazpik) to Panama to meet with the Cali Cartel(José María Yazpik), hoping to enforce his monopoly on cocaine and utilize Amado’s airstrips to sell the product directly in America. However, he learns that Guerra betrayed him and made a deal with the Columbians to transport cocaine. To save face, Felix offers to transport 70 tons of cocaine.

Amado begins purchasing more jets to help with product transportation, not knowing that the DEA has put trackers on the new planes. Meanwhile, Felix survives an assassination attempt from Guerra, prompting him to unsuccessfully reunite with his ex-wife and children. The attempt on his life further escalates the rising conflict between Sinaloa and Tijuana, resulting in the execution of high-profile Sinaloan trafficker Cochiloco (Andrés Almeida)

A breaking point is reached after Héctor Luis Palma Salazar (Gorka Lasaosa), head of the Sinaloa plaza, tries to team up with the the head of the Juarez plaza, Pablo Acosta (Gerardo Taracena), to kill Felix. However, a corrupt Mexican Intelligence agent intercepts the message and relays the information to Amado, who’s working with Acosta. Felix orders a hit on Palma, but he escapes.

Felix then sets his sights on rigging the Mexico City election, while the Cali cartel informs Amado that the 70 tons of coke are ready for transport. While loading the planes, Amado discovers the DEA trackers. He instead loads the planes with fake product, knowing the DEA will fall for his ruse, and sends the real cocaine to Juárez the next day where Felix splits the product amongst the plazas.

In the finale, 20 tons of Colombian cocaine is seized by the DEA in California. Felix uses this as leverage to force the Columbians to make him their primary transporter and sell coke in the U.S. Felix also forgives Palma for his assassination attempt, but has Palma’s wife and children murdered to send a message. Felix also tries to reconcile with his family again, but they want nothing to do with him. He then calls a meeting with all the plaza bosses, outlining their new goal to sell and distribute cocaine in the United States. But the bosses withdraw from Felix’s offer and splinter into new cartels.

Amado contacts the Cali cartel directly, offering his services to transport their product through Mexico. Felix is then arrested in his home by the Mexican government — a firm indication of their commitment to ending the drug war. The season ends with Breslin meeting with Felix in prison, and the two lay the scene for what will become an all-out drug war.

Walt launches Operation Leyenda, which results in the capture of a physician named Delgado who was compliant in the torture and murder of agent Camarena. Upon capturing Delgado, Walt and his team learn the name of Camarena’s torturer, Sergio Verdín (Pedro Giunti) of the Mexican Intelligence Agency. Walt’s team then kidnaps Verdín.

After being tortured, Verdín gives up the name of the man who owned the estate where Camarena was tortured: Rubén Zuno Arce (Milton Cortez). Upon learning that the DEA is coming after him, a scared Arce is spooked out of hiding and detained after the DEA is able to divert his jet to Texas. In custody, Arce gives up the names of both his uncle and Felix as people who knew about Camarena’s kidnapping and execution. However, once in front of a grand jury, he denies his prior statements, throwing a wrench in Operation Leyenda.

With Felix making it difficult for the Sinaloans to transport product through Tijuana, Sinaloan trafficker El Chapo (Alejandro Edda) begins building tunnels between the territories to help with covert transportation. Breslin and his team discover the tunnels and leak the information to the Tijuana plaza, who destroy the tunnels.

Breslin and his team learn of Felix’s connection to Amado and place trackers in his newly purchased planes, tracing him to an airstrip outside of Juárez. Elsewhere, Palma tries to cut a deal with the DEA after trying to assassinate Felix. He gives interviews to the American press, essentially putting a bounty on his head. While in hiding, he’s murdered by a joint FBI-DFS (Mexican Intelligence) raid in a small border town.

While tracking Amado’s planes, Breslin and his team intercept the cocaine in Juárez, only to discover the product is fake. They’re ambushed and almost entirely slaughtered. Following this massive failure, Breslin is reassigned. He meets with Felix in prison, and the two make it clear that a drug war is coming.