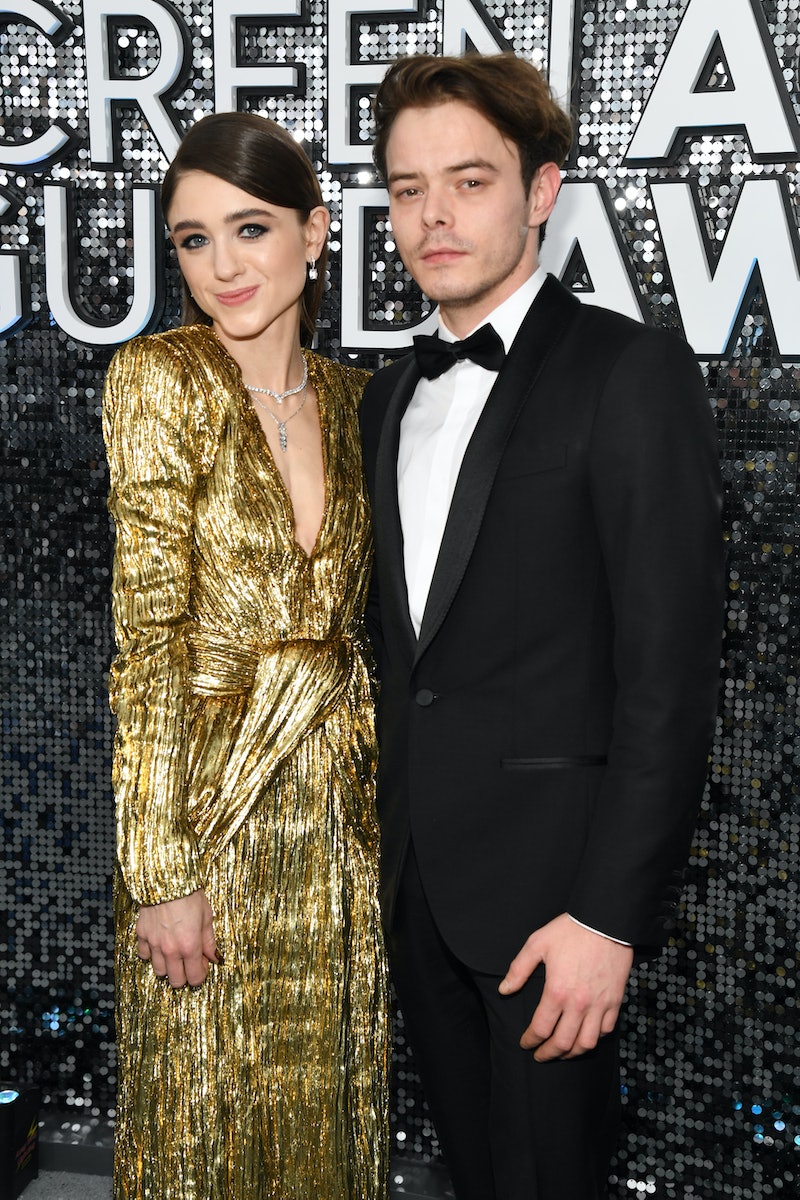 Stranger Things fans know them as Jonathan and Nancy, aka "Jancy," and, yes, they're dating in real life too. Before either of them even confirmed the dating rumors, Dyer and Heaton kept their romance as low-key as possible. Even when they were photographed by paparazzi holding hands or supposedly getting cozy, the costars kept their lips tightly sealed. It took them over an entire year to make their red carpet debut. Dyer and Heaton are the type of couple who will speak on something personal like a relationship when they want to, but have recently begun to share a little more of their dating life on social media – at least on Heaton’s side, anyway.

Now, here they are six years later still going strong as a couple, and have begun to open up about the importance of maintaining a private romance in the public sphere. With that, let's take a look at their relationship timeline to see how it all began and where they are today.

Dating rumours first originated in September 2016 after fans noticed both Dyer and Heaton were sharing photos of one another on Instagram during a trip together in Spain. At the time, neither commented on the speculation.

As you can see, Heaton and Dyer, along with two other friends, wore a group Wizard of Oz costume for Halloween in 2016. This picture fuelled dating rumours even further.

Then, in November 2016, the Stranger Things costars were spotted holding hands at a Nashville restaurant, according to an "eyewitness" who spoke with Entertainment Tonight.

Fans were even more invested in their rumoured relationship at the time after Heaton shared an Instagram of himself wearing Dyer's shoes. He captioned the image, "@nattyiceofficial Need my converse back!" Two days before he posted the photo, they were seen at LAX following the Golden Globes. At that time, and in which could've just been simply a coincidence, Dyer was wearing Converse. That same January, they were also seen grabbing a flight together at LAX after the SAG Awards.

TMZ approached the duo outside of LAX and straight-up asked them if they were dating. Dyer responded, "Whether people are dating or hanging out, I think that our cast just is cool with each other." She continued, "I mean, I won't speak for anybody else but it's been, you know … We're all one big family."

The cast of Stranger Things showed up to the MTV awards show to accept the Show of the Year award and as reported by InStyle, Heaton and Dyer "looked particularly cozy" during the event and "looked mighty comfortable as they posed for photos."

Once again, they were seen holding hands, but this time it was photographed. While strolling in New York City, Heaton and Dyer walked hand in hand, which many took as confirmation that they were indeed a couple.

The following month of that same year, Heaton shared an Instagram of Dyer in Paris. At this time, other Stranger Things cast members were in the French city for Paris Games Week, so it appears the two were there for work. However, they were again seen holding hands and even kissing in London a few days later.

On Dec. 2, 2017, Heaton and Dyer attended a Burberry x Cara Delevingne Christmas party in London. Then, two days later, and a little over a year after dating rumors surfaced, Heaton and Dyer made their red carpet debut at the British Fashion Awards in 2017 confirming their relationship.

Heaton wished Dyer a sweet happy 21st birthday on Instagram by sharing the above photo and writing, "Happy 21st birthday! @nattyiceofficial I hope it’s a great one and I’m stoked to be working on this new series with you. I think it’s gonna be great. P.S - Not feeling too well but I still wanna meet you at piedmont park tonight x."

At the January 2018 SAG Awards, Dyer also spoke about Heaton as her boyfriend for the first time publicly. After Us Weekly asked her what "she loves best" about hm, she replied, "He’s alright I guess. He doesn’t mess up our scenes too much!" she joked. "No, he’s great. He’s talented, like everybody in the cast. They’re all super, just great to work with." Us also asked what it's like working with Heaton, in which she stated there were "pros and cons" but that "it's a lot of fun, truly."

The two were once again spotted at 2018 Coachella. As you can see in photos shared by the Daily Mail, they definitely only have eyes for one another. You can also seem them having fun in the video above with some Riverdale stars.

And here, Heaton and Dyer are at the Christian Dior Cruise 2019 Fashion Show in Paris.

At the 2018 Emmys, Dyer and Heaton walked the red carpet together — and looked super adorable.

January 2019: Still Totally Into Each Other

In addition to attending the Sundance Film Festival together for Dyer's film, Velvet Buzzsaw, a source told Us Weekly about the couple at the event, "They seem totally obsessed with one another."

In an interview with V Man published on Feb. 27, Heaton discussed Dyer and what it's like working with her. "Because we work in the same industry and have had similar trajectories, we've gone through it together," he said. "Sharing that does bring you closer. They understand something that maybe no one else would. You go into high-pressure situations together but you can share those insecurities or whatever they are. The great, happy times, too... Really f*cking sweet!"

In April, they were seen again in Paris looking extremely happy together.

In an interview with Refinery29 published on Jul. 1, Dyer discussed Heaton and the importance of her private life. Regarding privacy, she said, "That's something important to me — with my family, with my friends, I really like to keep it for me." As for Heaton, she said about working with someone she dates, "It’s an interesting thing to work with somebody who you go home with." She continued, "It’s always really fun. We’re really comfortable with each other, so we can play and feel more free, and we can talk about it before."

To celebrate Dyer’s 25th birthday, Heaton shared an adorable snap of the two embracing and looking as in love as ever.

Heaton discusses his relationship with Dyer for the first time, explaining why they hid it for so long. Speaking to GQ Magazine, Heaton said that they weren’t being “sneaky” about being an item – just that they were young and didn’t want their feelings to ruin their chemistry on the show. “We didn’t really know what the relationship was,” he said.

According to Stranger Things co-creator Matt Duffer, “sparks were flying” already during their first audition and chemistry read.

May 2022: Natalia Dyer Talks About The Public Perception Of Her Love Life

During an interview with Cosmopolitan, Dyer shared her confusion as to why people find her relationship with Heaton so fascinating. “I’m always curious as to why it comes up,” she said. “Why do people want to know about it?” While Dyer is aware that viewers are interested in the real lives of the people who play their favourite characters, she’s still doesn’t get it.

“It sounds so cliché, but I’m just a person too,” she added. “Some people are very good about being open and sharing, and other people feel a little more comfortable holding some things for themselves.”

And as for whether or not they worry about doing interviews together, Dyer reiterates they were “colleagues first” before becoming romantically involved. “It’s a standard, natural thing that would’ve happened either way,” she said. “We work on the same show – naturally we would do interviews together and things like that. The weirdest thing about [our relationship] is other people’s perception and reaction to it. Everything else just feels very human.”

On May 18, the couple took to the red carpet for the Stranger Things season four premiere. Looking very much in love, Heaton kept Dyer close and the couple were often seen gazing into each other’s eyes.