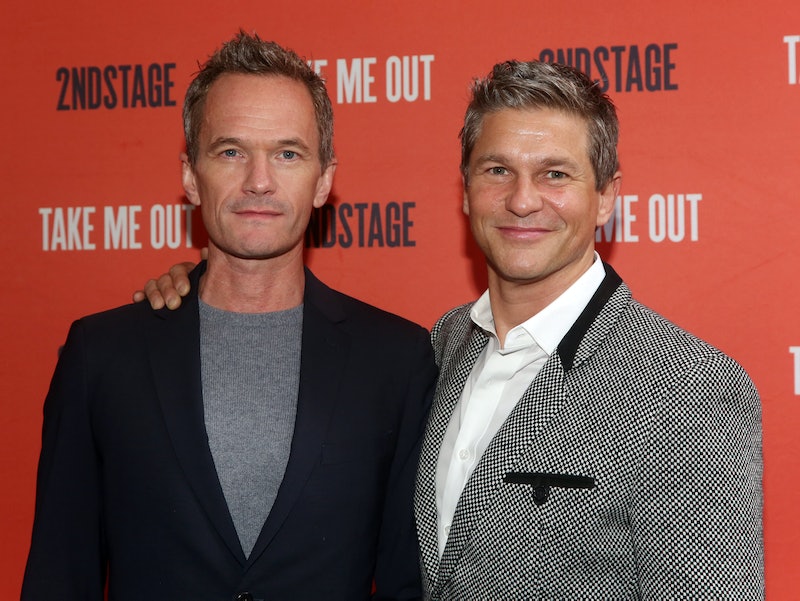 Neil Patrick Harris’ new Netflix series Uncoupled follows a man who gets unceremoniously dumped by his boyfriend of 17 years and has to navigate the gay dating scene once again — in his 40s. But in reality, the show’s star has no clue what this is like. Harris has been with husband David Burtka for 18 years, and as they come up on their eight-year wedding anniversary in September, they seem just as in love as ever.

The couple first became friends in the early 2000s and immediately started crushing on each other, but they wouldn’t go on their first date until 2004. Since then, they’ve been inseparable, with Burtka making the big move from New York to Los Angeles when Harris filmed How I Met Your Mother. (Yes, the show filmed in LA, despite being set in NYC.) However, fans didn’t know about their relationship at the time, as Harris only came out as gay in 2006. The couple quietly got engaged in 2007 (and again in 2008), but before tying the knot, they welcomed twins in 2010. The pair publicly announced their engagement the next year, and then finally got married in November 2014.

They’ve been living happily ever after ever since. At the premiere of Uncoupled, Harris reflected on his relationship with Burtka, telling Entertainment Tonight he’s “super happy” and “very grateful” for his love story and acknowledging that it’s all he’s ever known.

“David and I started dating, and we never stopped,” Harris said. “I didn’t come out till later. I didn’t really date a bunch of random people. I wasn’t around during the times of Grindr, swipe left, swipe right, so I fell head over heels for this dude, and he was into me, and we started living together really quickly, and now we have 11-year-old kids, and we’re still going strong.” Read on for their full relationship timeline to see how they got to this point.

Early 2000s: They Meet Through A Friend

The couple co-wrote an op-ed for Out magazine in 2012 in which they explained how they first met, with Harris saying that he ran into his friend Kate with “this brooding, James Dean–type guy in a leather jacket” that he was instantly drawn to. Burtka, in return, simply gave him a head nod and turned away. “I assumed he was Kate’s boyfriend and said, ‘Nicely done,’” he wrote. “And she said, ‘David? He’s not playing on my team, but he has a boyfriend.’” However, as Burtka said, he was struggling in his long-distance relationship at the time.

The first time they actually hung out was at an American Idol viewing party thrown by Kate. “I just stammered around him. I couldn’t take my eyes off him,” Harris wrote. “There’s something kinetic about him and his being. He’s classically sexy, yet he’s very much a boy in his energy.” But at the time, they stayed just friends and hung out in group settings while hopelessly crushing on each other. “I thought he was adorable, though, with these amazing blue eyes that are just hypnotizing to me,” Burtka wrote.

After Burtka broke up with his long-distance boyfriend, he took Harris on their first date to the movies, where he “thinks” they saw Taking Lives starring Angelina Jolie. From then, it was history. “We started hanging out every single night, and after three months, it was just nonstop,” Burtka explained. “We talk on the phone at least eight times a day and text at least 25 times a day.”

Signifying how serious their relationship grew, Burtka decided to move cross-country to Los Angeles with Harris so he could star on How I Met Your Mother before it premiered in September 2005, with the plan of moving back to New York after the show’s conclusion. “I assumed the show would be a short chapter,” Harris told Architectural Digest in 2015. Clearly, that didn’t happen. The series ran for nine seasons before eventually concluding nearly a decade later in 2014.

November 2006: Harris Comes Out As Gay

Just two season into How I Met Your Mother’s run, Harris came out as gay in an interview with People, attributing his decision to public speculation about his relationships. “Rather than ignore those who choose to publish their opinions without actually talking to me, I am happy to dispel any rumors or misconceptions and am quite proud to say that I am a very content gay man living my life to the fullest and feel most fortunate to be working with wonderful people in the business I love,” he said.

2007: Harris And Burtka Get Engaged

As they told Out, Burtka proposed to Harris sometime in 2007 on the same street corner where they first met. “We were on our way to an event at an Indian casino 45 minutes out of town in a limousine, and David wanted to stop for some reason that I didn’t quite get,” Harris recalled. “I thought he wanted to get some booze or something. And then he got on one knee and proposed, and I was so freaked out by it that I said, ‘Yes,’ but I didn’t know what it meant.” When he got the ring a few weeks later, the message was clear.

The couple made their red carpet debut walking side-by-side at the 2007 Primetime Emmy Awards, where Harris received his first of four Emmy nominations for Outstanding Supporting Actor in a Comedy Series for his role as Barney in How I Met Your Mother.

A year after Burkta popped the question, Harris returned the gesture and proposed with his own ring in Santa Monica on Valentine’s Day. However, they kept their engagement quiet for years to come.

After getting engaged, Harris and Burtka decided they wanted to have children even before tying the knot, with Harris calling this “the eternal game-changer” in their relationship. (Gay marriage not being legalized in every state at the time also didn’t help.) “We both agreed that if we wanted to have kids, we didn’t want to do it super late in the game,” he wrote for Out. “We wanted our parents to enjoy the process and to be young and vibrant enough to throw a ball with them, or to chase them around without using a walker.” And so they did.

Harris announced that they were expecting twins via surrogate in August 2010. “So, get this: David and I are expecting twins this fall,” he wrote on Twitter. “We’re super excited/nervous/thrilled. Hoping the press can respect our privacy…” Two months later, the couple welcomed son Gideon Scott and daughter Harper Grace into the world. “Babies!! On 10/12, Gideon Scott and Harper Grace entered the Burtka-Harris fold,” he tweeted. “All of us are happy, healthy, tired, and a little pukey.”

To celebrate the Marriage Equality Act being passed in New York on June 25, Harris revealed to the world that he had already been engaged to Burtka for years. “David and I did propose to each other, but over five years ago!” he confirmed on Twitter. “We’ve been wearing engagement rings for ages, waiting for an available date.”

March 2014: They Finally Go Back To New York

As soon as HIMYM filmed its series finale in early 2014, Harris and Burtka followed through on their long-delayed plan to make New York their home again, buying a Harlem townhouse for their family. “The plan was always to come back to New York when the show ended and raise our family,” Harris told AD.

Over seven years after they first got engaged, Harris and Burtka finally got married on Sept. 6, 2014, saying “I do” in an intimate Italian wedding surrounded by family and friends, including their two children. The couple wore custom Tom Ford suits for the ceremony, which was officiated by Harris’ longtime friend and HIMYM director Pamela Fryman. A-list guests included Kelly Ripa, who gushed to People that “their wedding vows were so beautiful,” and Elton John, who performed at the reception.

April 2022: They Celebrate 18 Years Of Being Together

On April 1, 2022, Harris and Burtka both commemorated the 18-year anniversary of their first date on Instagram, with Burtka explaining why they honor it every year. “We always celebrate the first date- because for 7 years of our relationship it was against the law to get married,” he wrote. “@nph I will love you over and over again year after year... Thanks for working so hard and for putting up with me. Here’s to another 18!!” For his part, Harris shared an adorable photo of them hugging and gazing into each other’s eyes. “Our first date was 18 years ago today. And David Burtka, I am not about to let you go,” he wrote. “Thank you for showing me the capacity of my heart.”