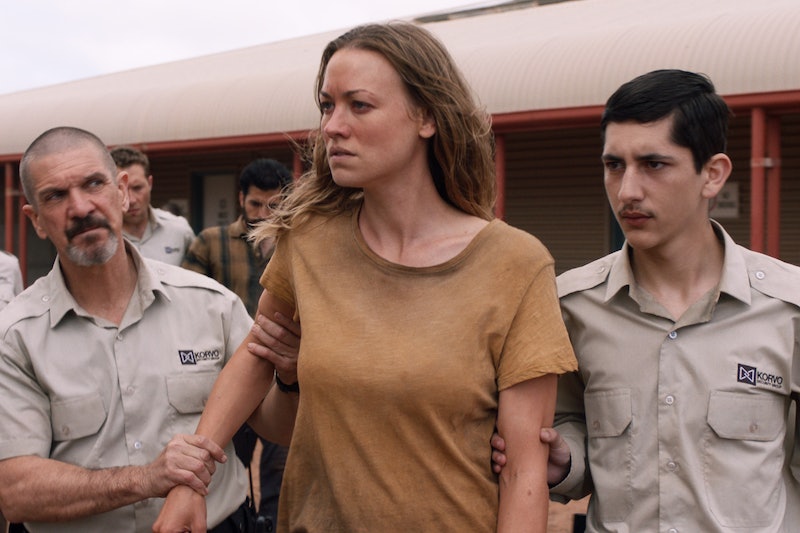 Co-produced by Cate Blanchett and starring The Handmaid's Tale's Yvonne Strahovski, Netflix's Stateless is a harrowing portrait of Australia's flawed immigration system. It's also based on the true story of Cornelia Rau, who was unlawfully detained in an Australian immigration detention center for 10 months between 2004 and 2005.

In May 1998, Rau took a four-month holiday from her job as an airline attendant and fell into a shady cult-like organization called Kenja. Though the spiritual healing group resists being called a "cult" on its website, members were allegedly forced to share their most intimate secrets with the group and would be blackmailed with them if they ever left, according to The Monthly. Being in Kenja severely worsened Rau's mental health, and five months later, she fled the compound. Rau also claimed that she was sexually assaulted during her time there. (Per the Sydney Morning Herald, Kenja's co-founder, Kenneth Dyers, was charged with 11 counts of sexual assault in 1993. He was later acquitted of the charges, but was charged with another 22 counts in 2005 for allegedly assaulting two 12-year-old girls. He denied the charges, but died by suicide before he could stand trial).

As reported by The Monthly, Rau was in and out of hospitals over the next few years. She was eventually diagnosed with bipolar disorder, and later with schizophrenia. It was during a stay at Manly Hospital in 2004 that Rau escaped. She was found hitchhiking in Queensland, and when she was stopped by police she told them her name was Anna and that she'd recently arrived from Germany. She showed them a stolen Norwegian passport.

Unable to establish exactly who Rau was, the authorities arrested her and deemed her an unlawful non-citizen. She spent several months at the Brisbane Women's Correctional Center and was moved in 2004 to Baxter Detention Center, where many Middle Eastern asylum seekers were being held. It wasn't until the Australian newspaper The Age published a story about a mysterious woman with a mental illness that Rau's family was finally able to locate and identify her. She was released and later received $2.6 million in compensation for her detainment, the Sydney Morning Herald reported.

As The Age pointed out, the reason Rau's unlawful imprisonment made headlines so quickly was likely because she was a middle-class white woman. Nonetheless, her high-profile case "forced Australians to rethink mandatory detention for asylum seekers." As Rau's lawyer George Newhouse explained to ABC News, Rau was the "trojan horse" who ended up exposing the cruelty and inhumanity of the immigration detention system.

And Rau's case rippled outward, too. Per The Monthly, Justice Finn found in May 2005 that Australia had failed to "comprehensively fulfill its duty of care with regard to two mentally ill detainees at Baxter," and 200 more cases of wrongful detention were eventually discovered. In July of the same year, investigator Mick Palmer found that five detainees had suffered serious human rights abuse at the hands of their guards in 2004, which the guards then lied about. Palmer also found that the immigration departments responsible for depriving thousands of people of their liberties – detention and compliance – were staffed by untrained officers ignorant of their own department’s rules.

Though Baxter Detention Center was shut down in 2007, detainment centers are still an ever-present problem. According to The Guardian, 1,450 people are currently locked up in immigration centers in Australia, and the Australian Human Rights Commission remains concerned that the centers are becoming “more and more like prison.”