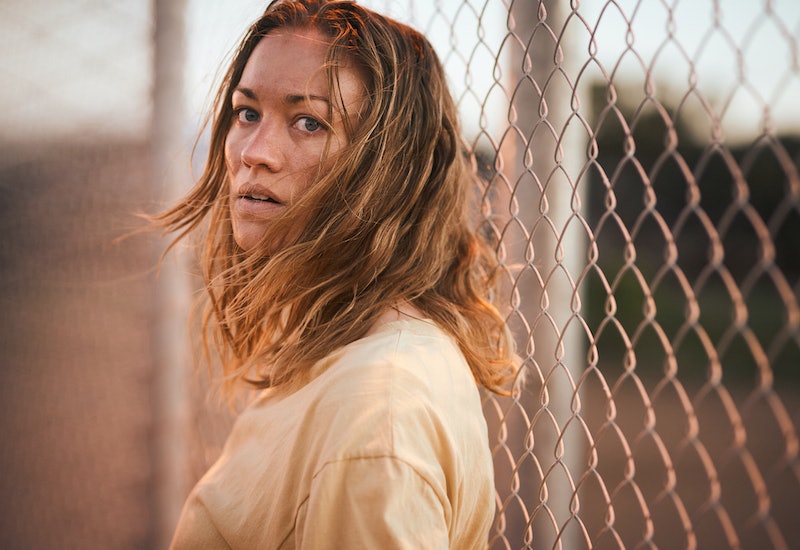 Netflix's miniseries Stateless opens with a feeling of restlessness: unhappy with her flight attendant job, Sofie (Yvonne Strahovski) seeks out the cult-like self-help group GOPA, run by charismatic husband-and-wife duo Gordon (Dominic West) and Pat (Cate Blanchett, who co-produced the series). After Gordon publicly humiliates her, Sofie experiences a mental breakdown and runs away, which puts Sofie in the crosshairs of Australia's flawed immigration system. It's a harrowing story inspired by real-life events: Sofie from Stateless is based on Cornelia Rau, who was unlawfully detained for 10 months between 2004 and 2005 in South Australia's Baxter Detention Center.

According to The Monthly, Rau was born in Germany in 1967. Her family moved back and forth between Hamburg, Indonesia, and Sydney for work before settling in Sydney in 1983. Rau later earned a diploma in leisure and recreation, and began working as a flight attendant in 1993.

The Monthly describes Rau as a "warm and vivacious, but troubled" person who was unsatisfied with her job. In May 1998, she took a four-month holiday, during which she got involved with a Scientology-like organization called Kenja. The spiritual healing group, which appears to still be operating today, is centered around "Energy Conversion" meditation sessions; its co-founder Kenneth Dyers claimed to have "God-like knowledge" that could help a person "unwrap the deepest recesses of the soul."

But liberal parliamentarian Stephen Mutch claimed this was all just a front, and described Dyers to The Weekly as a "seedy conman" and sexual predator who required young women to sever all ties to their families and hand over significant portions of their incomes. (Per the Sydney Morning Herald, Dyers was charged with 11 counts of sexual assault in 1993. He was later acquitted of the charges, but was charged with another 22 counts in 2005 for allegedly assaulting two 12-year-old girls. He denied the charges, but died by suicide before he could stand trial).

Anonymous sources claimed to The Monthly that Kenja encouraged co-dependent relationships and participation in "confronts," or sudden public forums where a single individual could be berated for all their perceived failings. It was during one of these confronts that a source claimed that Rau's "mind broke apart." She fled the compound and was found three days later, driving on the wrong side of the road in Sydney.

After her five months with Kenja, Rau was hospitalized on and off for several years, first being diagnosed with bipolar disorder and then with schizophrenia. Rau detested having to take medication or stay hospitalized, and she would often go missing or exhibit "bizarre" behavior, Rau's sister Chris told The Age. In March 2004, Rau snuck out of the psychiatric wing of Manly Hospital and disappeared into the night. Days later, Queensland police apprehended her while she was hitchhiking. She told them her name was Anna Brotmeyer, and she had just arrived from Germany.

"It was fictitious and designed to mislead. Ms. Rau did not want to be found," a federal inquiry stated, per ABC News. Later on, Rau claimed she didn't want to give anyone her real identity out of fear that members of Kenja would find her.

Unable to establish who Rau was, authorities deemed her an unlawful non-citizen and sent her to Brisbane Women's Correctional Center, per The Monthly. In October 2004, she was taken to the immigration detention facility Baxter Detention Center and placed in a closed ward called Red One, where she was only allowed outside her cell for a few hours a day.

"Cornelia ended up in detention due to a mental illness. She has no recollection of her six months in the Brisbane jail and her four months in Baxter, near Port Augusta, much of that time (more than five weeks) spent in solitary confinement," Rau's sister wrote for The Sydney Morning Herald.

Finally, in January 2005, The Age published a story about a mystery woman experiencing mental illness at Baxter. The story caught the Raus' attention, and after Chris demanded Baxter authorities fax her a photo, she was able to identify her sister and have her released.

In March 2008, the federal government paid Rau $2.6 million in compensation for her wrongful detainment. And according to Chris, "Cornelia herself and many people involved in her plight were fully included and consulted" in the making of Stateless.

More like this
Everything To Know About A Potential 'Lockwood & Co.' Season 2
By Gretchen Smail
All The ’70s Easter Eggs You Missed In 'That ’90s Show'
By Grace Wehniainen
The 'Gossip Girl' Reboot Creator Is “Looking For A New Home” To Air A Potential Season 3
By Brad Witter
The 'Teen Wolf' Creator Revealed If 'Wolf Pack' Takes Place In The Same Universe
By Grace Wehniainen
Get Even More From Bustle — Sign Up For The Newsletter
From hair trends to relationship advice, our daily newsletter has everything you need to sound like a person who’s on TikTok, even if you aren’t.