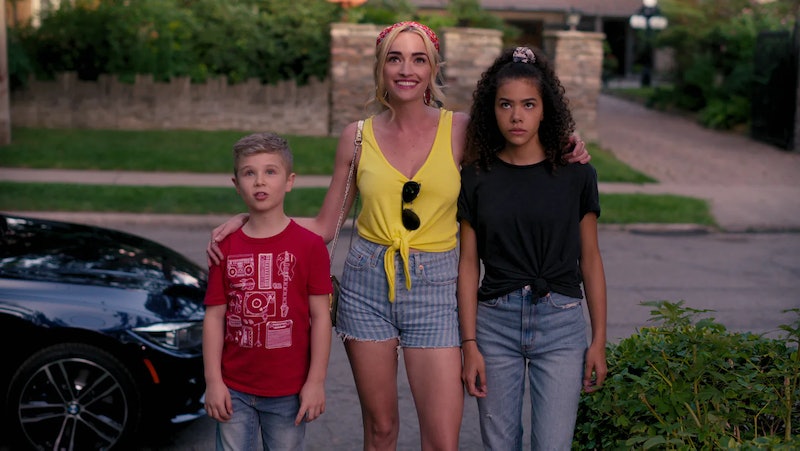 If you wish you were living in Stars Hollow right now, Netflix's new show may be the closest you'll get. The streaming service released the trailer for Ginny & Georgia on Tuesday, Jan. 26, and the characters are just like Gilmore Girls' Rory and Lorelai — well, if one of the title characters is to be believed. "We're like the Gilmore Girls," Georgia tells her daughter Ginny in the trailer, "but with bigger boobs."

Helmed by an all-female creative team, the new coming-of-age series follows 15-year-old Ginny Miller (Antonia Gentry), who feels like she can't measure up to her vivacious 30-year-old mother Georgia (Brianne Howey). Wanting a fresh start, Georgia moves her family to a New England town to give them "something they’ve never had… a normal life," according to Netflix's official description. But Ginny struggles with having to move so often and befriend new people every time.

The trailer shows that things go smoothly at first, with Ginny quickly making friends and getting an "adorable little boyfriend" while her mother gets weed from the high school heartthrob. However, Georgia quickly learns that her past will always haunt her — including Ginny's father, who Ginny says is the only man her mom has ever loved.

If the similarities to Gilmore Girls are almost too uncanny, that's how it should be. Creator Sarah Lampert and showrunner Debra J. Fisher told Bustle that they looked to the classic early 2000s drama for inspiration, but also drew from other iconic teen comedies, such as Mean Girls, Veronica Mars, and even Pretty Little Liars. "We talked a lot about homages but ultimately we were like, 'How do we make those shows feel modern?'" Fisher says. "How can we combine all these interesting tones?"

One method they're using to update Ginny & Georgia is by embracing tough conversations about topics like race. Ginny's biracial identity allows for those meaningful talks to be written effortlessly into the script. "As a young girl, I always wanted to watch a TV show that had a heroine who looked like me and Ginny was finally THAT GIRL!" director Anya Adams said in a statement. "The opportunity to be part of creating a coming-of-age series with an all-female creative team that is centered on a mixed-race young woman was ultimately the draw for me."

Ginny & Georgia will premiere on Netflix on Feb. 24.