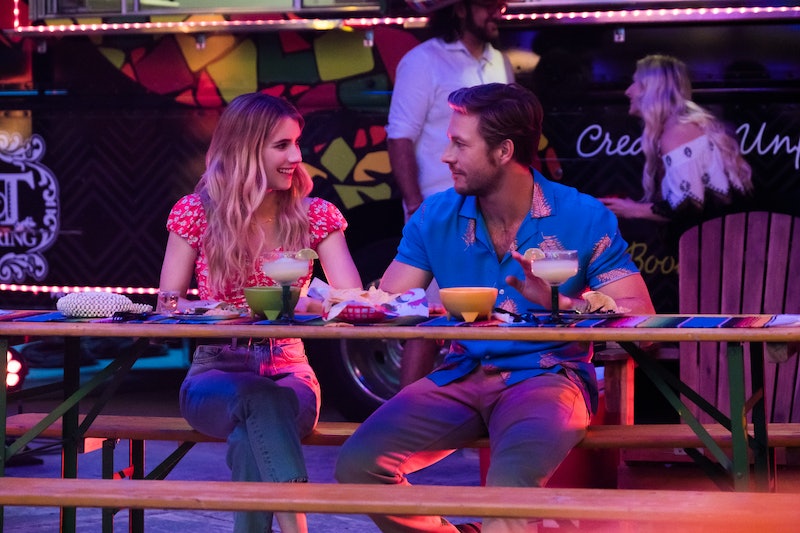 October hasn't even begun yet, but the trailer for Netflix's newest Christmas film Holidate is here to bestow some much-needed holiday cheer on us a little earlier than usual. And given the pure dumpster fire of a year 2020 has been, any attempt to bring this year to a close ASAP is more than welcome — especially if it includes a hunky Australian.

Set to debut on Wednesday, Oct. 28, Holidate centers around Sloane (Emma Roberts), who is tired of feeling like the outcast of her family just because she's still single — a fact that her loved ones make a point of rubbing in her face around the holiday season. As a solution, she makes a pact with a random (but very, very handsome) stranger named Jackson (Luke Bracey), a fellow member of the single community. Together, they agree to be each other's "holidate" for every notable celebratory event throughout the entire year, with the promise the neither of them will become romantically invested in the faux relationship.

At first the plan appears to be going smoothly enough, but the more time they spend around one another, the more complicated things get. Soon it becomes clear that this fake romance may not be so fake after all.

Aside from Roberts and Bracey — whose Australian accent and luscious blonde locks were destined for Netflix stardom — the cast includes several other recognizable faces, such as Grey's Anatomy alum Jessica Capshaw, Alex Moffat, Frances Fisher, and former Wicked star Kristin Chenoweth. The movie was directed by John Whitesell with Steven Bello, Jenny Hinkey, and Tiffany Paulsen serving as executive producers.

Normally, it would seem somewhat weird to dive headfirst into a Christmas movie a few days before Halloween takes place, but if there was ever a time to break with tradition, it would be during a national pandemic that has forced so many of us to stay inside and away from others. (If we're being honest, do calendar dates even matter anymore?) Netflix understands this and recognizes how much we all want this year to be over with already. So why not kick off the holiday festivities a little early? It may not be enough to keep us merry all year round, but at this point we'd settle for just a couple hours of joy.