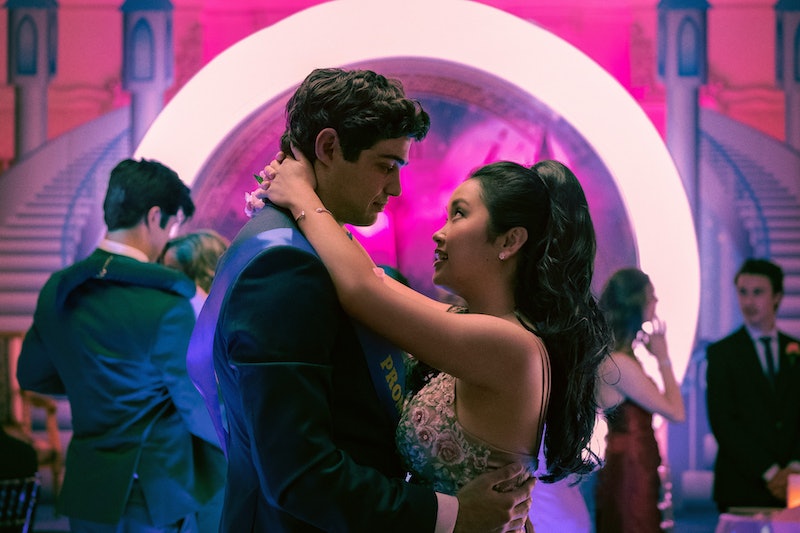 Say goodbye to rom-com heroines Elle Evans and Lara Jean Covey. Netflix's hit franchises The Kissing Booth and To All the Boys I've Loved Before will officially end this year. The streaming service confirmed that both of the franchise's third films — The Kissing Booth 3 and To All the Boys: Always and Forever, Lara Jean — would be the last while announcing a new slate of 2021 movies on Tuesday, Jan. 12. While the premiere of The Kissing Booth 3 has not yet been announced, Netflix revealed that the third installment of To All The Boys will premiere on Feb. 12.

To All the Boys centers on high schooler Lara Jean Covey (Lana Condor) and the upheaval caused when her secret letters written to various crushes throughout the years are sent out by her younger sister Kitty. Lara begins a fake relationship with one of the recipients, jock Peter Kavinsky (Noah Centineo), to make his girlfriend jealous, but real romance blossoms. Their relationship is thrown for a loop in the second film when another letter recipient, John Ambrose McClaren (Jordan Fisher), reemerges in Lara's life.

Based on the trailer, the third and final movie will follow Lara Jean and Peter as they navigate their senior year of high school — attending the prom together, dealing with the lingering presence of Peter's ex (and Lara Jean's ex-BFF) Gen, and looking forward to college. However, their plan to bring their picture-perfect relationship with them to Stanford is put in jeopardy thanks to a rejection letter and the pull Lara Jean feels towards New York City. Will they be able to commit to a long-distance romance — or are Lara Jean and Peter doomed to a post-graduation breakup?

The Kissing Booth follows high schoolers Elle Evans (Joey King) and Lee Flynn (Joel Courtney), best friends whose friendship is jeopardized when Elle falls for Lee's older brother Noah (Jacob Elordi). In the second installment, Elle and Noah's relationship is put to the test when Noah heads off to college at Harvard and Elle begins her senior year of high school, leaving the two to contend with the trials of long-distance relationships. The third and final film will center on Elle as she decides whether to join her beau at Harvard or attend UC Berkeley, her dream school, with Lee.

Both of the rom-coms — based on novels by Beth Reekles and Jenny Han, respectively — experienced critical success on Netflix. The first Kissing Booth film, released in May 2018, became the most-watched movie in the country, according to Netflix chief content officer Ted Sarandos, while the second installment, released in July 2020, became one of the most popular releases of the year. The first To All The Boys film, released in August 2018, similarly reigned as the most-streamed Netflix original with strong repeat viewing.

The news about the end of these two beloved franchises comes after Netflix announced that 2021 will feature a new film every week. Amy Adams' The Woman in The Window, Jennifer Lawrence's Don't Look Up, Lin-Manuel Miranda's Tick, Tick … Boom!, and Regina King's The Harder They Fall are among the films on the stacked lineup.

More like this
Here’s Everything Coming To & Leaving Netflix In February
By Jake Viswanath
Twitter Is Mad At The Razzie Awards For Nominating A Child For Worst Actress
By Radhika Menon
Rupert Grint Just Shared A *Major* Update About Ron Weasley’s Future
By El Hunt
Twitter Is Overjoyed By Angela Bassett’s Record-Making Oscar Nomination
By Maxine Harrison
Get Even More From Bustle — Sign Up For The Newsletter
From hair trends to relationship advice, our daily newsletter has everything you need to sound like a person who’s on TikTok, even if you aren’t.

This article was originally published on Jan. 12, 2021