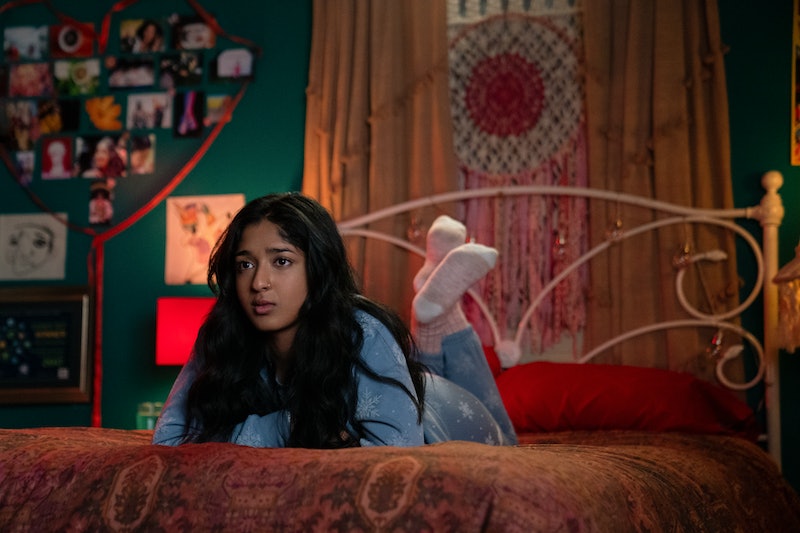 While trying to figure out her “boy situation” during a quiet night at home, Devi’s best friend Fabiola (Lee Rodriguez) accidentally suggests that she could date both guys at once. “So, you’re saying I should just have two boyfriends?” the 15-year-old asks with a smirk. And although Fabiola and Eleanor (Ramona Young) unanimously agree that it’s a terrible idea, Devi seems to have made up her mind. “Oh my God,” she says. “I have two boyfriends.”

Turns out, the newly widowed mom wasn’t even close to done laying on the guilt after walking in on her daughter’s makeout sesh. “What are you going to do at my funeral? Just have sex on top of my grave?” she asks. “I pray it’s a closed casket.” But alas, her mother’s funeral arrangements are the last thing on Devi’s mind. Why? Because there’s a new student at school who could possibly shake up both of her relationships. “What’s up? I’m Aneesa,” the “prettier, cooler” Indian girl says in front of the class.

Inevitably, Devi’s life soon spirals out of control. She falls into a jacuzzi, possibly gets hit by a car, watches Aneesa hit on Ben right in front of her eyes, and makes out with Paxton on a rainy night in her bedroom. Despite the messiness that will undoubtedly transpire in Season 2, though, Devi won’t listen to anyone — unless, of course, that person is her favorite female rapper. “My mom doesn’t tell me how to live my life,” she says. “Megan Thee Stallion does.”

Never Have I Ever fans won’t have to wait long to watch all of the high school chaos unfold onscreen. Season 2 is set to premiere on the streaming platform on July 15. Much like the show’s first season, this one was created by executive producer Mindy Kaling, with Lang Fisher serving as co-creator, executive producer, showrunner and writer. Get your popcorn ready, because if the preview indication, Devi is about to take us on another adventure full of the drama, pettiness, and heartbreak that defined many of our teen years.

More like this
'Wednesday' Star Emma Myers Thinks A Wenclair Storyline Is “Possible” In Season 2
By Alyssa Lapid
Ashton Kutcher Wants Danny Masterson “To Be Found Innocent” In Rape Retrial
By Jake Viswanath
Here’s Everything Coming To & Leaving Netflix In February
By Jake Viswanath
At 28, Debra Jo Rupp Was Living A Much Different '70s Show
By Grace Wehniainen
Get Even More From Bustle — Sign Up For The Newsletter
From hair trends to relationship advice, our daily newsletter has everything you need to sound like a person who’s on TikTok, even if you aren’t.