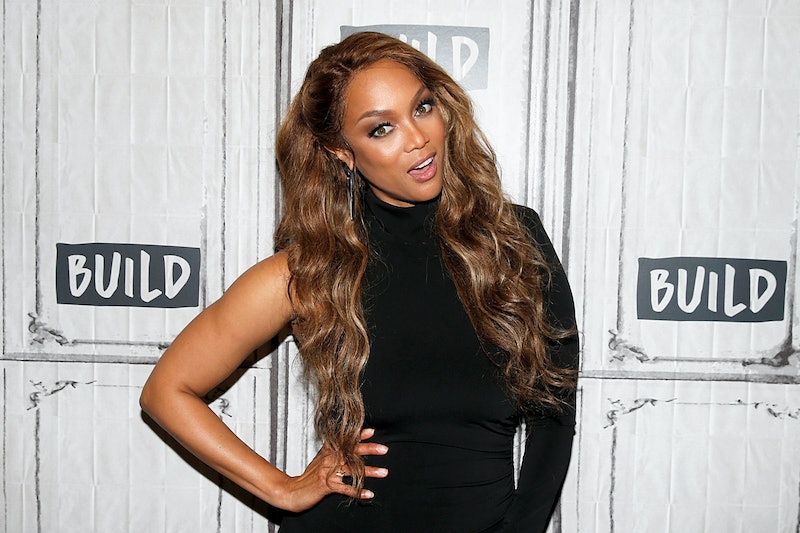 It looks like ABC wants to be out with the old and in with the new — and fierce. After confirming the departures of Tom Bergeron and Erin Andrews, the network has announced that Tyra Banks will serve as the next host of Dancing With the Stars, starting with Season 29, which is slated to debut sometime this fall.

“I’ve been a fan of DWTS since its beginning," Banks said in a statement following the big news, as per TVLine. "The fun mixed with raw emotion, seeing celebrities push past their comfort zones, the sizzling dance performances. It’s always transported me to my days of turning it up 10 notches on the catwalk." She also acknowledged former DWTS host Bergeron, writing, "Tom has set a powerful stage, and I’m excited to continue the legacy and put on my executive producer and hosting hats.”

Prior to this latest gig, Banks has served as host to shows like America's Next Top Model and America's Got Talent, which makes her a worthy candidate to fill the role. And it seems she already has plans to make some significant changes to the reality dancing series. "Let's just keep this real: It is going to be so next-level," Banks teased during an appearance on Good Morning America on Wednesday, July 15, hinting that she has some "crazy" alterations planned with some of the producers. "[We're] keeping the stuff that we know America loves, but you need to get ready because it's going to be different!"

Apart from making adjustments to the show itself, Banks is excited to make DWTS history by becoming the first Black female host and first solo host to ever grace the ballroom dance floor. "I like breaking those doors down so that we don't have anymore firsts," she stated. "But, it's nice to be first, right? So that you can let so many more people in after you."

The model might not be known as a dancer, but speaking with GMA, she did take some time to recall her own personal experience dancing in the 2000 film Coyote Ugly, which led to her sustaining an injury that still impacts her today. "Dancing on top of that bar, I tore my lateral meniscus. To this day I still have that injury, so, I just live with it. It just is. It doesn't necessarily hurt, it just looks a little weird," she recalled. "Oh, honey, look at those scenes, it was worth every cyst going through this lateral meniscus!"

This is all part of a "new creative direction" ABC is looking to deliver this fall on DWTS. For his part, Bergeron seemed completely surprised by the news, tweeting on Monday, July 13, “Just informed @DancingABC will be continuing without me. It’s been an incredible 15 year run and the most unexpected gift of my career. I’m grateful for that and for the lifelong friendships made. That said, now what am I supposed to do with all of these glitter masks?”

Andrews followed up with a statement of her own the next day, tweeting, “Thank you ABC and the entire Dancing With the Stars family for [six] memorable seasons. Those years wouldn’t have been as special without my loving host Tom Bergeron, the talented dancers, and witty judges. I will always cherish my days on that set, even if I wasn’t the best at walking in heels.”

More like this
Rachel Fuda Gave Birth Just Weeks Before 'RHONJ' Season 13
By Brad Witter
'Bachelorette' Vet Clare Crawley Revealed Her Stunning Wedding Photos
By Stephanie Topacio Long
David Schwimmer & Gemma Collins Join 'Celeb Bake Off' & Twitter Can't Cope
By Sam Ramsden
Everything To Know About 'RHOSLC' Season 4
By Jake Viswanath
Get Even More From Bustle — Sign Up For The Newsletter
From hair trends to relationship advice, our daily newsletter has everything you need to sound like a person who’s on TikTok, even if you aren’t.