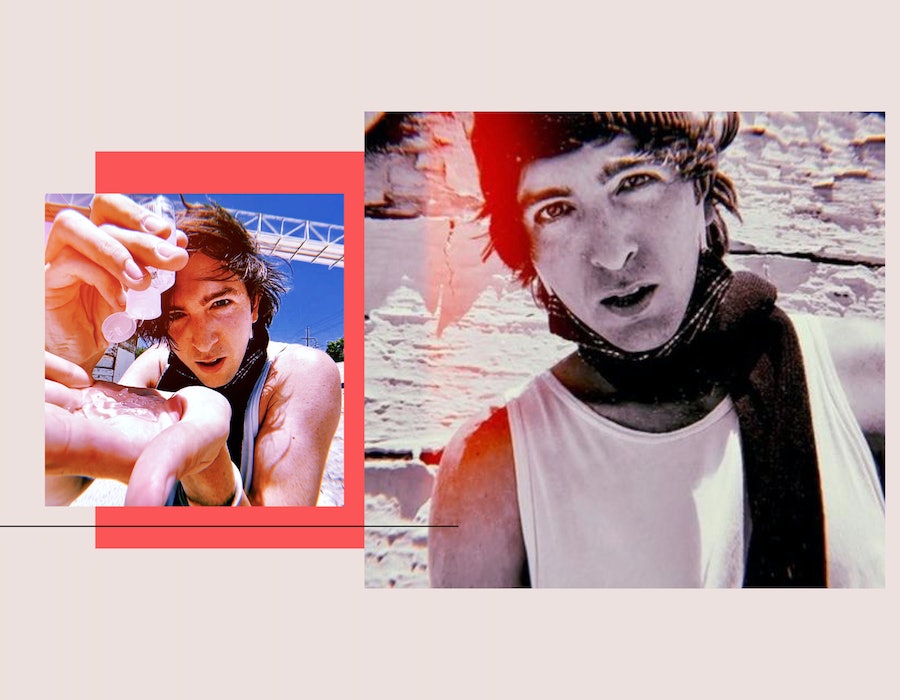 It all started with an Instagram post. "Calling all musical people!" Succession star Nicholas Braun wrote on Instagram on May 7. "I have some lyrics stuck in my head." In the accompanying video, Braun explains that he's looking for musicians to provide accompaniment to some lyrics he wrote. "I'll sing the lyrics, and you can see if it's up your alley," he deadpans, before contorting his face and voice into a pop-punk affect: "DO YOU HAVE THE ANTIBODIES? / DO YOU WANT TO BE WITH ME?" he yells.

A mini-meme was born. Musicians posted their own renditions of the song; Braun sang more lyrics. Then an A+R rep from Atlantic came knocking. "I honestly wouldn't have recorded anything [otherwise]," Braun tells Bustle over Zoom from his Manhattan apartment. "I was like, 'This is just an Instagram thing.' It was fun for people and I got to see all these videos, and it's good for us to have something creative to do. Me and all these strangers basically are making stuff together. Then [the producer] and I got on the phone and I was like, 'Alright, if I’m gonna do this, we gotta try to actually make it really good."

The resulting song, "Antibodies (Do You Have The)," delivers pristine pop-punk production with silly lyrics, and its reception has been far more positive than that time Logan Roy glared disapprovingly at a rapping Kendall, with outlets hailing it as "a coronavirus banger" and "the song of our pandemic summer." The track and its accompanying music video (not to mention the tongue-in-cheek merch, all proceeds of which will be donated to Partners In Health to control the spread of COVID-19) dropped just days after Braun was nominated for a Best Supporting Actor Emmy on Tuesday. Below, Braun talks to Bustle about the inspiration for "Antibodies," his favorite masks, and shotgunning beers on Zoom.

This song has been stuck in my head all day.

That’s what we want. We want that thing stuck in your head. It’s been stuck in my head for 3 months, and I’m good with it.

"Antibodies" has some amusing lyrics, but it's also extremely catchy. Would you call it a parody song?

It’s kind of hard to say. It’s not a straight-up parody. It’s not a Weird Al Yankovic song, although I loved those songs as a kid. I wanted it to be a good song more than just a funny song, so it was this balance. In the grand scheme of things, to think, "I just want to go on a date" [like in the song] is kind of ridiculous, because we’re in crazy existential times right now. So I thought the lyrics have to be funny. And the lyrics that came to me, I was like, ‘This is ridiculous.’

What really does it for me is the lyric, “I want a girl whose blood’s got the stuff.” We don’t even know what the stuff is, medically. It’s a little creepy, and perfectly vague.

You can get medical with it!

You already make music but aren't usually a punk guy. Would you make more music in this genre given the success of "Antibodies"?

In quarantine I have not been listening to this [kind of music], but I did go back [and listen] once I was making this. I was like, what are the references for this? It’s “Last Resort” by Papa Roach. It’s “Alive” or “Youth of the Nation” by P.O.D. It’s “Fat Lip” by Sum 41. It’s basically any song by Offspring.

Were you a fan of those bands growing up?

I was, I totally was. I’d say the biggest punk-y ‘90s band was No Doubt for me. I loved No Doubt. I had some posters of No Doubt. I think I had some Blink 182 posters on my walls as well. I guess I don’t think of myself as a big fan of [punk], but then as soon as these songs play I’m like, oh yeah, anything from that period I know the words to.

What kind of music have you been listening to in quarantine?

I’ve been listening to a lot of Andy Shauf, Phoebe Bridgers… she’s so talented, so good, I really don’t get tired of listening to her music. I could just keep playing it over and over. I’ve been listening to this rapper Baby Keem, just really good, great production, great melodies. This person Octavian I was just turned on to. I’m not constantly seeking new music, so I’m playing albums from 10 years ago, like Bon Iver… I play a lot of Daniel Caesar and James Blake. I’ve been playing James Blake’s new song “Are You Even Real?” over and over.

What kind of music do you think Cousin Greg is into, have you ever thought about it?

Totally. I think in the pilot we shot a few scenes where I was listening to music and I think I requested a bunch of Foo Fighters and maybe Eminem…. But he’s not a big rap guy, I feel. He doesn’t know the new stuff. He’s probably stuck in the 2008 realm of musicians.

"Antibodies" was inspired by trying to date in a pandemic. Have you had any other pandemic dating dilemmas that might inspire another song?

I think this was the trickiest part of the quarantine. It's interesting going on dates with bandanas on, with masks on, and [realizing] all the normal stuff where you might sit close to each other at a restaurant, you might put your arm around them or something, that all of that is gone until date three, four, until you feel like OK, I can get close to this person, and they can get close to me. There’s a new fear of human contact, so it just changes it, which I think is really interesting. It sort of forces you to get to know somebody better before you go in for a hug... or something more.

Are you still continuing to go on pandemic dates?

Now that I’m back in New York, no. It’s just a little dicey here.

My favorite mask is a mask from CVS, it’s $4, it’s cloth. It looks way more expensive for some reason. It’s just a simple, cloth, off-white… it’s got a little pleat in it. You just need a nice little pleat. And some good fabric.

Do you wear it in the "Antibodies" video?

It’s not in the video, no, my buddy gave me that mask. He texted me the other day and was like, ‘Dude, I can’t believe you used that mask in the video, you owe me mask royalties!’

Handwashing. Purell just makes my hands feel weird. And most hand sanitizer smells bad. Rarely will someone come to you like, ‘Hey, want some of my hand sanitizer?’ and you’re like, ‘This is really good stuff, you have high quality stuff.’

What’s your most chaotic quarantine behavior?

I mean, I had some Zooms with a group of buddies and we would just get lit on the Zoom. I mean, we were shotgunning beers, it’s like 10 dudes all on the Zoom, just drinking and taking our shirts off. So it was a real bro-y Zoom thing.

What’s your beer of preference for shotgunning?

Pabst Blue Ribbon. At least in quarantine, it was. It’s just the kind of beer I wanted to drink.

I wouldn’t have thought about shotgunning a PBR, for whatever reason.

I don’t know that I would have. But when you’re on Zoom and the friends are asking for it, you gotta obey.

More like this
The 'Love, Lizzo' Harry Styles Scene Is Just 1 Moment That Made Fans Feel Seen
By Brad Witter
'The White Lotus' Costume Designer Explains That Accidental 'Princess Diaries' Moment
By Grace Wehniainen
Everything To Know About 'The White Lotus' Season 3
By Grace Wehniainen
Mariah Carey Is "So Proud" After Her Kids Joined Her In The Thanksgiving Day Parade
By Stephanie Topacio Long
Get Even More From Bustle — Sign Up For The Newsletter