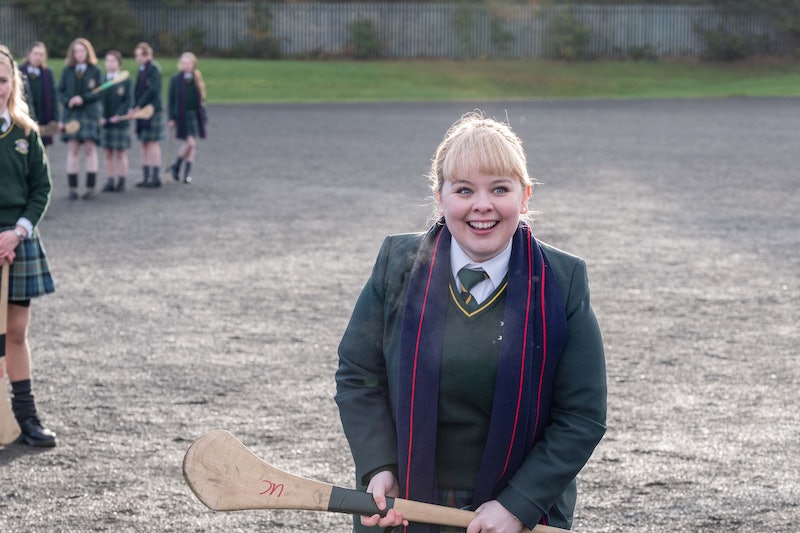 If you're looking for a series to counteract the miserable weather currently plaguing the UK, look no further than Derry Girls. Back for its second season this month, the Channel 4 series has the girls up to all their usual antics as they navigate their teenage years during the Troubles in Derry, Northern Ireland, in the 1990s. While it's hard to pick a fave character among the four girls, I can't help but gravitate towards the hilarious Clare Devlin, played brilliantly by an up-and-coming Irish actor. So who is Nicola Coughlan, and what other roles has she plated prior to Devlin in Derry Girls?

Raised in Galway, Ireland, Coughlan trained at the Birmingham School of Acting and the Oxford School of Drama before beginning her acting career. While you're more likely to recognise her from appearances in the ITV period drama Harlots and BBC soap opera Doctors, Coughlan has also starred in numerous stage productions including Jess and Joe Forever, in which she played Jess.

Last year, Coughlan took to the stage as Joyce Emily Hammond in The Prime of Miss Jean Brodie. This role in particular caught the attention of the world when a critic decided to comment on Coughlan's body image, rather than her acting, in a review of the play.

"Everything I'd done to create my character had been reduced to a hurtful word and casual comment on my appearance," Coughlan wrote in an op-ed for the Guardian. "I am not someone who cannot handle criticism, but if I wanted to read cruel things about myself I'd head to YouTube's comments section under a Derry Girls video and fill my boots. [The reviewer] is a professional; he was meant to review my work. Instead he reviewed my body. That is not acceptable [...] I hope in the future that more people will talk about our work, our inspirations, our drive rather than our looks. A revolution is happening and I want to play my part in it."

If Coughlan's role as 16-year-old Devlin in Derry Girls is anything to go by, she is certainly heading places. A particularly poignant moment for her character came at the end of the last series, when Devlin came out to her friend Erin Quinn (played by Saroirse-Monica Jackson).

Speaking to Digital Spy about this storyline, Coughlan said: "I found out when I very first auditioned, so I'd known for about six months before the others. So it had always been in my mind. It was always a very important part of the character. But I also knew that they [...] wanted Clare to be her own person."

"I think they love the fact that Clare is super girly. They didn't feel the need to make her a one-dimensional person. It's a massive honour. I take it really seriously... and it's so lovely to hear back from people, that it means a lot for them to see it. It's definitely represented through series two as well. It think people will be very happy."

Catch Derry Girls every Tuesday night at 9.15 p.m. on Channel 4. You can also catch up online at All 4.