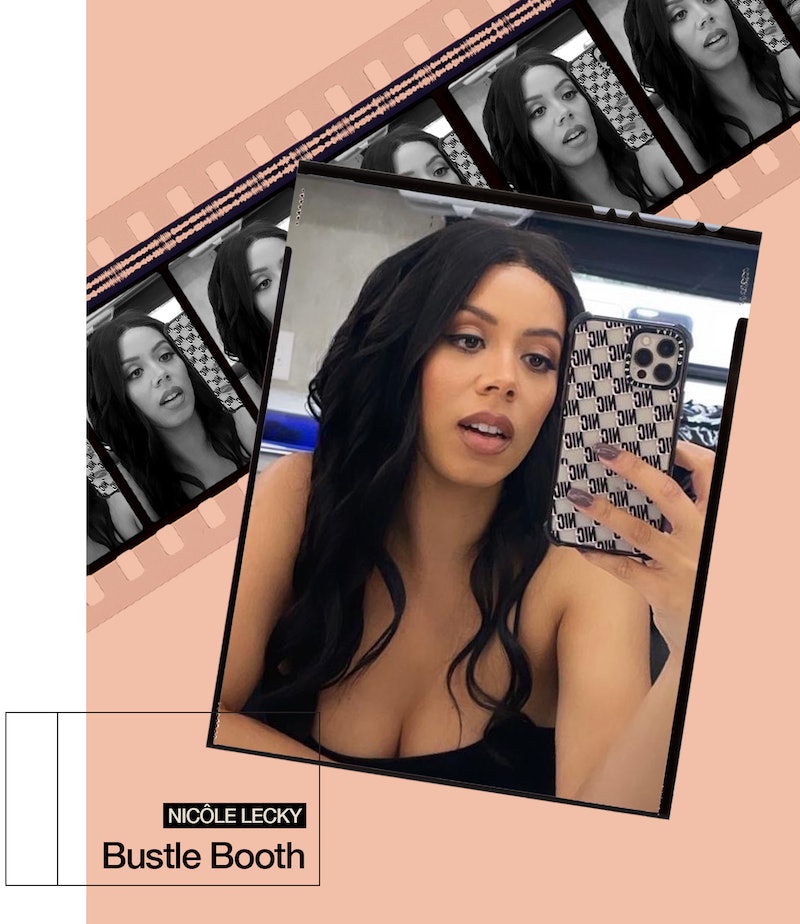 Based on the hit play Superhoe, BBC Three’s Mood tells the story of an aspiring singer who is forced to navigate the darker side of social media. Ahead of the show’s debut, comparisons were drawn to Phoebe Waller-Bridge’s Fleabag. But for Nicôle Lecky — the series’ writer, executive producer, and lead actress — this comparison is a “reductive” one.

“Fleabag is obviously incredible,” Lecky clarifies. “But people always compare women to another woman, and they don’t seem to do that with men. It’s definitely not a bad comparison, though.”

Lecky portrays East End Londoner Sasha Clayton who, is kicked out of her family home and forced to fend for herself. Sasha, who has a knack for finding trouble, strikes up a friendship with party girl Carly (Lara Peake), who introduces her to the exciting, complex, and sometimes dangerous, world of social media influencing. Sasha drifts away from her dreams of selling records as her online presence begins to ascend. The musical drama features a soundtrack penned and performed by Lecky herself.

“Mood is a depiction of the social landscape that we're living in now. It’s very funny, but also delves into some really dark places. Ultimately, though, it’s got music at the heart of it,” Lecky says of the series.

Amid the storytelling, themes including the effects of social media on women are peppered throughout. For Lecky, this was an “important topic” to explore.

“I’ve become very aware that social media has created a very homogenised look for women. Plastic surgery and invasive cosmetics are on the rise,” Lecky explains. “We’re sort of taking the perceived best bits from women and creating this one ideal woman, and we don't do that to men.”

Preparing for the TV adaptation, Lecky also spoke to “a lot of women” who had experience with another topic explored throughout Mood — the grooming and exploitation of women that exists both online and in real life.

“I learned how women can be groomed or manipulated in a certain way,” Lecky reveals. “Online, for example, it might start with a person convincing a woman to take a bikini selfie, but then it progresses to OnlyFans. It’s like they’re incrementally trying to figure out if a person is a candidate for sex work.”

As for the legacy of Mood, Lecky hopes the series will serve as a depiction of “what can happen” for potentially vulnerable women, as opposed to an outright warning. “The show is rooted in an authentic portrayal of what many women have experienced.” Lecky continues, “But do I think people will watch Mood and think that this is the route to go down? Probably not.”

I don’t drink coffee! An Oat Matcha latte is my go-to when I need caffeine.

I didn’t watch a lot of cartoons but A Goofy Movie and Freddie as F.R.O.7 were my favourites.

Jane Campion’s The Power of the Dog. It’s incredible, and mainly because I can’t fully articulate why. I love anything that makes me feel, without an obvious explanation.

Who's your celebrity idol?

Michelle Obama. She’s not a celeb, as such, but she’s definitely iconic.

Selling Sunset! Oh, the drama. It would take me a solid week before joining Team Christine or Team Chrishell. Huge decision.

Kanye West and Syleena Johnson’s “All Falls Down.” I like to rap the verses and sing the hook. Musically, I love it.

The Diary of a CEO podcast. I’m on the go a lot and I really enjoy the company of it, plus the insight I learn at the same time.

What's something you would want people to say about you?