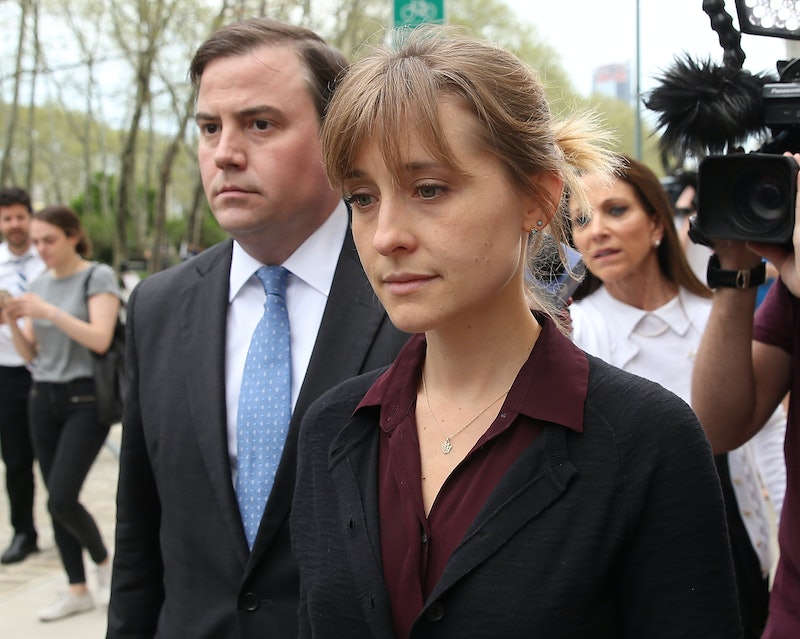 There are numerous reports that the cult at the center of HBO's new docuseries The Vow, NXIVM, is still active, despite its leader Keith Raniere's federal convictions for sex trafficking and conspiracy. The group’s former publicist Frank Parlato recently told The Sun he even has reason to believe NXIVM is recruiting new members. But with Raneire in custody and several other high-ranking members awaiting sentencing, it's unclear in what capacity and to what extent the group persists.

Earlier this summer, an organization calling themselves “The Forgotten Ones” began staging dances outside the Metropolitan Detention Center in Brooklyn, where Raniere has been kept without bail throughout his 2019 trial and now as he prepares for sentencing (a process which has been delayed multiple times, most recently due to COVID restrictions placed on the court). In online videos of the dancing demonstrators, Parlato claims he can identify several NXIVM group members, including the actor Nicki Clyne and others who he likens to the “brain-washed Manson girls.” (Clyne was named as a co-conspirator at Raniere’s trial but has not been charged with any crimes in connection to NXIVM).

On the Forgotten Ones' website, the group states that they're dancing for all the forgotten inmates, though they mention only Raniere by name. "They're absolutely active,” Parlato told The Sun, claiming that according to his sources, the Society of Protectors — a NVIXM-affiliated group for men — is still holding virtual meetings on the messaging app Telegram. Parlato now runs a website called the Frank Report, which closely tracks NVIXM and the legal trials that have stemmed from it.

These are only the most recent reports of activity from NXIVM. Rick Alan Ross, the head of the Cult Education Institute in New Jersey, told the Albany Times Union last year that he’d heard of splinter groups forming in the aftermath of Raniere's arrest. He said at the time people were “getting together” and “extolling the philosophy of 'rational inquiry' as laid out by Keith Raniere.”

But Ross also cautioned against overstating the extent to which NXIVM still exists. In addition to Raniere, the group’s co-founder and bookkeeper have pled guilty to felony charges, as has high-profile member Allison Mack, who starred on Smallville. The cluster of properties in upstate New York that served as NXIVM headquarters has been seized by the government. Most critically, says Ross, the group no longer has its “charismatic” leader at the helm. “I don't think that anyone will step into the ... power vacuum and reinstitute the group, and unite the group factions or people that are left in the residue of what's happened."