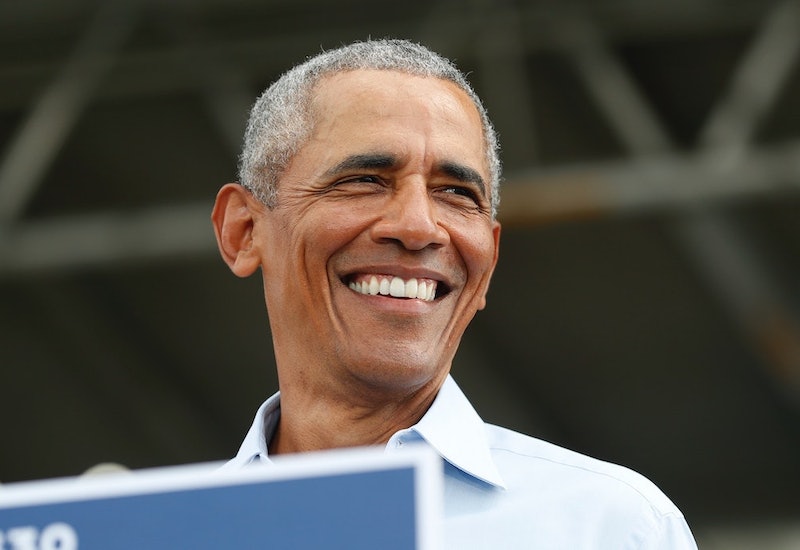 Former President Barack Obama clarified his controversial "defund the police" comments during an appearance on The Daily Show With Trevor Noah on Tuesday, Dec. 15. Obama received backlash from activists and politicians earlier this month when he called "defund the police" — a phrase that calls for funds to be divested from police departments and into community and public safety efforts — a "snappy slogan" that would cost progressives a "big audience." When Noah brought up the controversy, Obama clarified his remarks and refuted claims that he was trying to chastise the movement.

The former commander-in-chief said he isn't against the idea of reallocating resources, but rather the type of verbatim used. "That particular slogan — the concern is that there may be potential allies out there that you lose," Obama said. "And the issue always is: how do you get enough people to support your cause that you can actually institutionalize it and translate it into laws, structures and so forth?" The answer, according to him, could be as simple as a small tweak in language.

He then provided an example of how sending a mental health worker rather than an armed officer to a homeless man "ranting and railing in the middle of the street" would yield better results. "If we describe that to not just white folks, but, let's say, Michelle's mom, that makes sense to them," he added. "But if we say 'defund the police,' not just white folks, but Michelle's mom, might say, 'If I'm getting robbed, who am I going to call, and is somebody going to show up?'"

He also addressed the notion that he's "trying to make white people comfortable rather than speaking truth to power” and said, "The issue to me is not making them comfortable. It is, 'Can we be precise with our language enough that people who might be persuaded around that particular issue to make a particular change that gets a particular result that we want?' What's the best way to describe that?"

Obama's initial "snappy slogan" remarks received criticism from activists and, most notably, Democratic New York Congresswoman Alexandria Ocasio-Cortez, who maintained that activists "aren't PR firms for politicians" in a Twitter thread. "The thing that critics of activists don't get is that they tried playing the 'polite language' policy game and all it did was make them easier to ignore," Ocasio-Cortez tweeted. "The whole point of protesting is to make ppl uncomfortable. Activists take that discomfort w/ the status quo & advocate for concrete policy changes. To folks who complain protest demands make others uncomfortable... that's the point."