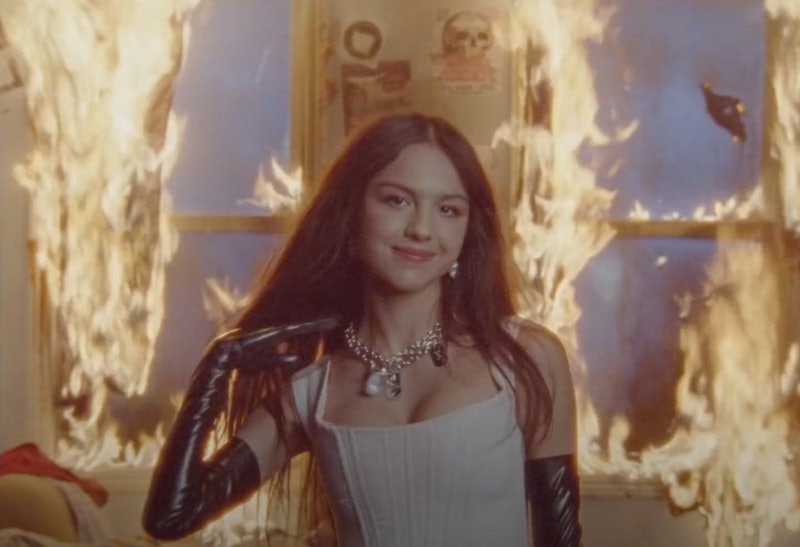 Lead singer of Paramore Hayley Williams and the band’s ex-guitarist Josh Farro have been credited as co-writers on Olivia Rodrigo’s hit song “good 4 u” after fans noted similarities between the Sour track and Paramore’s “Misery Business”.

Paramore’s publishers Warner Chappell revealed the news via their Instagram story yesterday (August 25, 2021), although it’s not clear exactly when the credit was added. All we know is that “good 4 u” – which topped the UK charts for at least five weeks this summer – did not have Paramore listed as co-writers when it was originally released in May 2021.

Rodrigo has previously cited “early 2000s pop-punk” (of which Paramore would definitely qualify) as a major influence on her music.

Elsewhere, the former Disney star has also credited Taylor Swift and Jack Antonoff on her song “1 Step Forward, 3 Steps Back” due to its similarities with “New Year’s Day” from Swift’s sixth studio album Reputation.

In June this year, Rodrigo faced criticism for “lifting” a guitar riff from Elivis Costello’s 1978 hit “Pump It Up” for “Brutal”, the first track on Sour. In response, the British rock star wrote on Twitter: “This is fine by me. It’s how rock and roll works. You take the broken pieces of another thrill and make a brand new toy. That’s what I did.”

Costello noted that his song was inspired by Bob Dylan’s “Subterranean Homesick Blues”, which was in turn inspired by Chuck Berry’s “Too Much Monkey Business”.

In the same month, Courtney Love accused Rodrigo of plagiarism after the 18 year old released promo images for her concert film Sour Prom, which saw her dressed as a prom queen in a tiara holding flowers with smudged mascara, reminiscent of Love’s album cover for Live Through This.

Love posted the two images side by side on Instagram with the caption, “Spot the Difference! #twinning.” She later wrote on Facebook, “Stealing an original idea and not asking permission is rude. There’s no way to be elegant about it. I’m not angry. It happens all the time to me. But this was bad form.”

In an interview with Variety published two months later, Rodrigo appeared to brush off the accusations but praised Love’s work, saying “I mean, to be honest I’m flattered that Courtney Love knows who I am. She’s from a totally different generation, so I thought that was cool, but I think we’re both obviously really inspired by the film Carrie. I don’t know — I didn’t really give it too much thought.”

While Rodrigo is by no means the first artist to retroactively add songwriting credits to avoid copyright and plagiarism claims in court, many on social media have commented that this latest development has “opened Pandora’s Box” when it comes to the complex litigation of copyright law in music.

As Vlogger and musician Hank Green put it on Twitter, “If someone using bits of a previously-used chord progressions requires a songwriting credit, things are going to get real messy.”

Previously, Ed Sheeran shared royalties for his hit song “Shape Of You” with the writers behind TLC’s “No Scrubs” and Mark Ronson and Bruno Mars shared their royalties for “Uptown Funk” with members of The Gap Band, after they claimed the song had elements of their song “Oops Upside Your Head”.