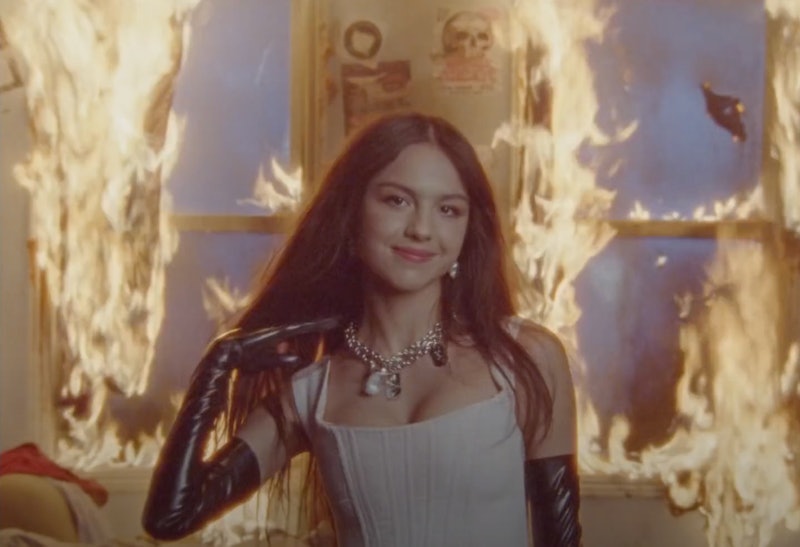 Don’t mess with Olivia Rodrigo. Not only can she write a masterpiece about how you did her wrong, as proven by her No. 1 hit “drivers license,” but she can also literally set your life on fire. The 18-year-old star commits arson in the video for her new single “good 4 u,” which is inspiring chaotic yet relatable memes and tweets. The new breakup anthem is a nod to the mid-2000s, when emo pop-rock tunes from Avril Lavigne, Paramore, and Ashlee Simpson reigned supreme, but she’s even more angry than they ever were.

In the new video, directed by Petra Collins, the singer plays a high school cheerleader who’s not all that interested in the squad. She’s out for revenge. As the song goes on, she only gets more heated, stumbling her way through a routine and bumping into classmates in the locker room. “It’s like we never even happened, baby, what the f*ck is up with that?” she asks as she angrily does her makeup. When she heads to a grocery store for some gasoline — and cheesy popcorn — it’s over for her ex. Rodrigo floods his bedroom, sets his furniture on fire, and gleefully revels in the destruction.

Just like her breakout hit “drivers license” and follow-up single “deja vu,” from her debut album SOUR out on May 21, fans are already connecting “good 4 u” to her High School Musical: The Musical — The Series co-star Joshua Bassett, who she’s rumored to have dated. The line about her ex’s “career really taking off” will likely only fuel speculation. However, what most fans are currently concerned with are the memes inspired by Rodrigo committing arson, a.k.a. the living embodiment of the “This Is Fine” meme.

Fans are also pointing out several references they’ve noticed in Rodrigo’s video, including the cheerleaders in The Princess Diaries, the infamous lake scene in Jennifer’s Body, and the fact that Miley Cyrus was the original Disney Channel pop-rock it girl, who popped off at her ex on the 2008 hit “7 Things.”

However, it seems that fans were most impressed and amused by Rodrigo’s sudden transition from the emotional songwriter heard on “drivers license” to the chaotic riot girl that created “good 4 u.”

Needless to say, Rodrigo has proven her versatility before her debut album is even out. Get you a pop star who can do it all.