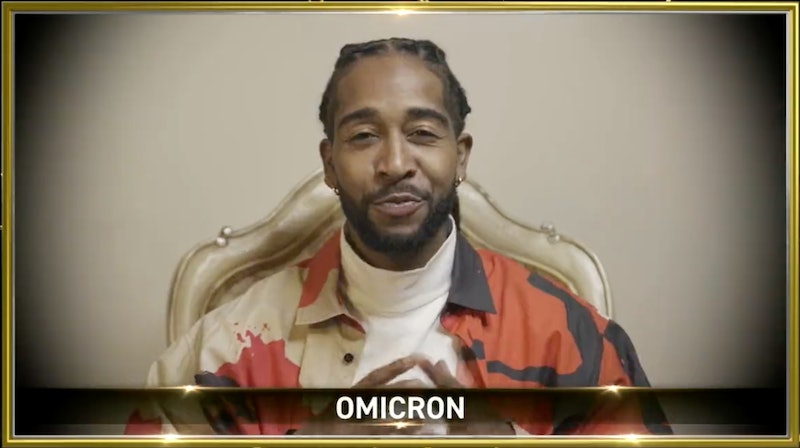 Omarion has something to say about Omicron: “I am an artist, not a variant,” the 37-year-old singer and B2K boy band member said in PSA videos on TikTok. To ring in 2022, the “Ice Box” singer posted the videos as a response to the jokes and memes on Twitter that poke fun at the similar spellings of his name and the COVID-19 variant spreading around the world.

The clarification gag began when one of Omarion’s PSAs aired on Dick Clark’s New Year’s Rockin’ Eve on Dec. 31 — with ABC producers purposely labeling him as “Omicron” onscreen instead of Omarion. “Now, I know there has been a lot of confusion online recently, so my lawyers asked me to read this,” he read. “I, Omarion, am a musician and entertainer — you knew that — not a viral variant, OK?” He dealt with similar confusion as a member of B2K. “The last time I had to do this was in 2000 when everyone confused Y2K with B2K,” he said. “That ain’t how it’s supposed to be.”

He continued the jokes on TikTok, stating in his second video that it was “important not to touch me,” contrary to his 2005 hit “Touch,” which soundtracked the clip.

In his final video, he outlined instructions to follow if you ran into him: “Please be aware if you just so happen to run into me on the street, you don’t have to isolate for five days, nor do you have to have a negative test result in order to dance to my music.”

It was a clever way for Omarion to respond to the jokes and memes referring to the COVID-19 variant as his birth name, including a since-deleted Instagram post from actor LaKeith Stanfield, who posted a screenshot of a message he sent to the singer: “You ruining Christmas for everybody smh.” According to Complex, he captioned the post, “I’m weak i wonder if he’s gunna respond.”

Omarion’s reactions to the viral memes have only inspired more memes.

More like this
Jennifer Coolidge Recites “Jenny From The Block” Beside J.Lo In Her First TikTok
By Jake Viswanath
TikTok Is Just Realizing Taylor Swift's “Untouchable” Is A Cover Of A Rock Song
By Alyssa Lapid
5 Wild Theories About Miley Cyrus’ “Flowers” Music Video
By Jake Viswanath
Twitter Is Roasting Liam Hemsworth Thanks To Miley Cyrus' New Song “Flowers”
By Jake Viswanath
Get Even More From Bustle — Sign Up For The Newsletter