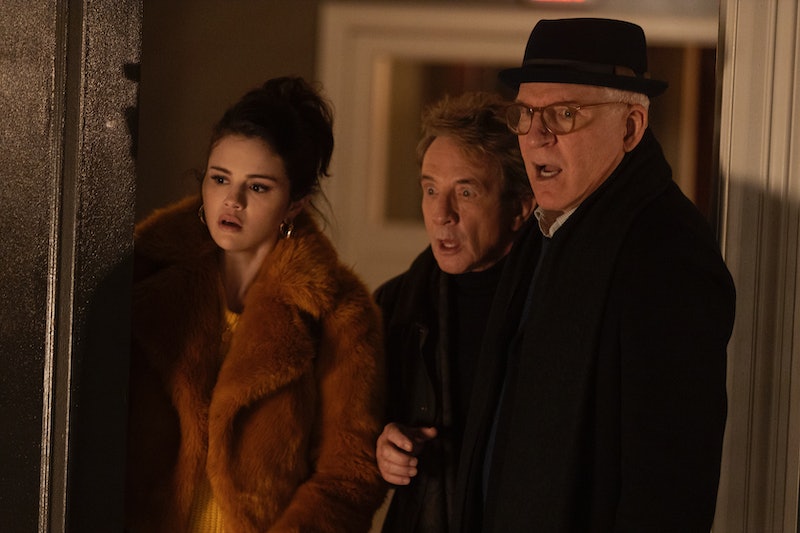 Selena Gomez has to be one of the busiest people in all of entertainment — because she really does it all. Since early 2020, the superstar and Instagram titan has released her latest album Rare, switched things up with a Spanish-language EP titled Revelación, created a cooking show for HBO Max called Selena + Chef, and filmed music videos with Trevor Daniel, Rauw Alejandro, and Blackpink. Yet somehow, in between all those busy days, she found time to star in a new series coming to Hulu later this summer.

Only Murders In The Building Trailer & Plot

Have you ever gone looking for something exciting to do, and then when you’re right in the middle of it, realizing maybe it’s a little bit more than you were counting on? That’s exactly the feeling Only Murders In The Building looks like it encapsulates, and it’s one we can all relate to, even if we’ve never been involved in a murder mystery.

Three residents in an apartment building — Gomez, Steve Martin, and Martin Short — are strangers to one another to begin with, but they’re about to embark on a dangerous and thrilling mission that will bond them together. The trio may not know each other when the story begins, but they do share one thing in common: a love of all things true crime. All of a sudden, a passion and a hobby becomes all-consuming as the three find themselves smack dab in the middle of a crime.

“A great murder mystery unpeels itself, like an onion,” Martin’s character states in the series’s trailer, a sign that this isn’t going to be a cut-and-dry tale.

In another teaser released by Hulu on June 22, the A-list trio encounters a detective who is investigating a murder that just occurred in their apartment building. Intrigued by the scene and their respective acquaintanceships with the deceased, they take it upon themselves to search for clues and get to the bottom of the thrilling mystery. “I can’t tell if I want it to be nothing, or for it to be something,” Gomez says timidly in the clip, which also sees her ferociously tackling — and appearing to stab — a potential suspect.

Who’s In The Cast Of Only Murders In The Building?

The trailer only shows the three main stars — Gomez, Martin, and Short — and it’s pretty clear that they are going to be the focus of Only Murders In The Building. According to IMDB, they’re also the only ones that are slated to appear in all 10 episodes in the first season. The 28-year-old pop sensation stars as Mabel, and from the short snippet that’s been made available, she seems like a wry and down-for-anything badass. Her one line in the series’s first trailer, “the secrets are the fun part,” suggests she’s not scared of anything in this building.

Martin and Short, the more seasoned of the main cast, star as Charles and Oliver, respectively. Martin is also credited with co-creating Only Murders In The Building and even writing it, as he’s a man of many talents. With his co-creator John Hoffman (Grace & Frankie), Martin also serves as one of the series’s executive producers alongside Short, Gomez, Jamie Babbit (But I’m A Cheerleader), Dan Fogelman (creator of This Is Us), and Jess Rosenthal. Aaron Dominguez and Amy Ryan will also be in the cast as Oscar and Jan, respectively.

When Will Only Murders In The Building Be Released?

Fans of Gomez and the rest of the cast are surely happy to see the trailer drop, but it’s a little bit of a tease when the show doesn’t come out for months. Those who love all three of the main stars of Only Murders In The Building will have to wait more than two months until the series’s Aug. 31 release date. For now, you can re-watch the trailer and read Hulu’s official synopsis of the series:

“From the minds of Steve Martin, Dan Fogelman and John Hoffman comes a comedic murder-mystery series for the ages. Only Murders in the Building follows three strangers (Steve Martin, Martin Short and Selena Gomez) who share an obsession with true crime and suddenly find themselves wrapped up in one. When a grisly death occurs inside their exclusive Upper West Side apartment building, the trio suspects murder and employs their precise knowledge of true crime to investigate the truth. As they record a podcast of their own to document the case, the three unravel the complex secrets of the building which stretch back years. Perhaps even more explosive are the lies they tell one another. Soon, the endangered trio comes to realize a killer might be living amongst them as they race to decipher the mounting clues before it’s too late.”

More like this
Everything To Know About Taylor Swift’s 10th Studio Album, 'Midnights'
By Grace Wehniainen and Jake Viswanath
Jason Derulo Is Launching A New Singing Show In The UK
By Maxine Harrison
Twitter Is Freaking Out Over Rihanna’s 2023 Super Bowl Halftime Show Announcement
By Stephanie Topacio Long
Kanye West Apologizes To Kim K "For Any Stress I Have Caused" In Rare Interview
By Jake Viswanath
Get Even More From Bustle — Sign Up For The Newsletter