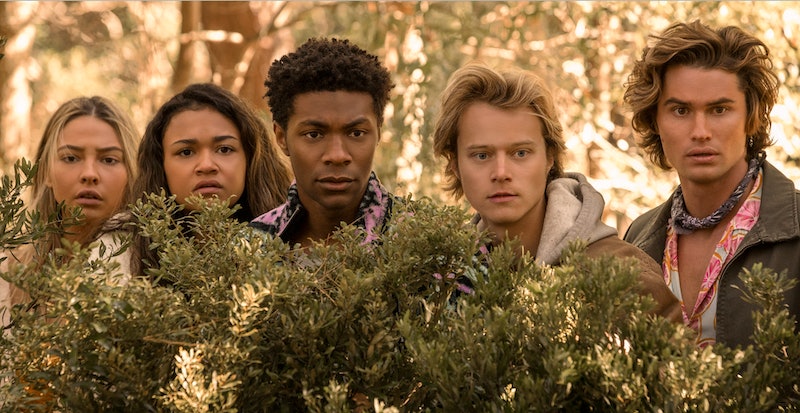 Spoilers ahead for Outer Banks Season 2. John B and the Pogues find themselves on a new island at the end of Outer Banks Season 2. Though the teens succeed in rescuing Sarah from her family out at sea, they fail to retrieve the Cross of Santo Domingo from Ward and Rafe. Broke and trapped somewhere in the Caribbean, the Pogues will have to figure out how to survive if they have any hope of chasing after the Camerons in the future. Luckily, the final moments of the season reveal that they have somebody watching their back: John B’s father Big John, who everyone thought had died after being attacked by Ward.

Netflix officially renewed Outer Banks for Season 3 on Dec. 7. But over the summer, creators Shannon Burke and Josh and Jonah Pate told Bustle that they’d already begun mapping it out. They knew that bringing back Big John “would be a great cliffhanger for Season 3” and are excited for the “father-son stories” they can explore in future episodes. Here’s what we know so far.

Seasons 1 and 2 aired just over one year apart — in April 2020 and July 2021, respectively. It’s unclear how far along in filming and production the team is for Season 3, but fans could expect new episodes as early as summer 2022.

All of the main cast members are confirmed to return: Chase Stokes as John B, Madelyn Cline as Sarah, Madison Bailey as Kie, Jonathan Daviss as Pope, and Rudy Pankow as JJ. We’ll also see the rest of the Camerons again, considering that in the final moments of Season 2, Rafe (Drew Starkey) promised a weakened Ward (Charles Esten) that he’d track Sarah down. Sarah’s stepmom Rose, played by Caroline Arapoglou, will also likely factor into Season 3, as she proved to be just as criminal as her husband.

Carlacia Grant’s Cleo, who got marooned on the island with the Pogues after helping them escape Ward’s boat, has also been upped to a series regular. Josh Pate hinted that she could even become a love interest for Pope. While discussing Kie and Pope’s failed relationship, he said that though Pope was “hurt,” they didn’t want him to make him “pitiful.” “That's why we were excited to introduce Cleo this season as another member of the Pogues. That gives us more romances to play going forward,” Josh said.

He added that “a lot of fans want to see JJ and Kiara” get together, and they’re keen to “generate more teen soap” since John B and Sarah’s romance has been pretty much settled. “We were like, well, we need another character. So Cleo evolved into that, and I think we'll be using a lot of that in Season 3,” Josh said.

Despite being stranded on an island, Jonah Pate said that the Pogues “can probably last for a while” living off of the land, noting that there’s also a lot of boat traffic in the Caribbean even in deserted areas. “They've camped and fished a lot,” Josh Pate said. “Not to say that it wouldn't be hard, but I don't think they're going to be in rags and, like, starving.”

It appears that Big John will also be working with Carla Limbrey going forward. Though it’s unclear how the two know each other, Jonah said that their connection will be further explored in Season 3, along with the “mythology of the gold,” which will “tie into an even bigger mythology” — presumably involving Pope’s ancestors and the mythical shroud that Limbrey is looking for.

As for the Camerons, Ward and Rafe seem determined to capture Sarah — after all, she knows about all of their crimes — but Rafe hesitated to take her down when he had the chance. “It's psychological,” Jonah Pate said of Rafe’s inability to pull the trigger when he had Sarah in his sight. “It's hard to shoot your sister, especially twice.”

This post will be updated with additional details as more information on Season 3 becomes available.